The previous governor of Rivers state and ministerial nominee, Rotimi Amaechi, has written three letters to the Senate telling the upper chamber why his screening should not be stopped. 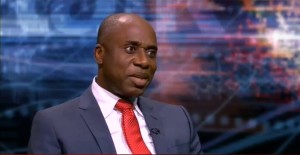 Amaechi said that all the allegations levelled against him by his state senators were not only false but were meant to tarnish his image and to “solely irritate, embarrass and tarnish his hard-earned reputation.”

He stated that since there are pending cases at the Federal High Court, Abuja and the Court of Appeal, any action of the Senate to the contrary will be subjudice.

The letter to the Senate written on his behalf by his lawyer, Edward E. Pepple, states that the Senate should disregard the petition against him by the Integrity Group and Justice G. G Omereji’s judicial commission of inquiry.

Amaechi’s lawyer cited the case of the former vice president Atiku Abubakar. He said that the Supreme Court had emphasized that an indictment by the Judicial Commission of Inquiry or Administrative Panel is not an “indictment” or sufficient for the purpose of preventing a person from holding a public office.

The letter, that was dated October 12 and addressed to the Senate president, Bukola Saraki read in part: “It has informally come to our client’s attention that the Judicial Commission of Inquiry set up by the Governor of Rivers State, Chief/Barr. Nyesom Ezenwo Wike, to judicially investigate our client and probe into some transactions of the Rivers State Government undertaken during the tenure of our client has purportedly come up with a report based on which the Governor and Government of Rivers State have supposedly also issued a White Paper, wherein it has proposed that certain steps and actions should be taken against our client.

“Of course, this is clearly in defiance of the pending suit at the Court of Appeal on the issue.

“It is important to mention that our client only became aware of this situation through a news bulletin aired on both the Channels Television and the Independent African Television (AIT). Apart from those, no other form of communication has been sent to our client, whether directly or indirectly.

“As had been mentioned in our earlier letters, our client is challenging the competence and validity of the Judicial Commission of Inquiry and its powers to make any valid or binding decision or pronouncement as it relates to him.  The matter is pending at the Court of Appeal, Port Harcourt Division, in suit No. CA/PH/342/2015; Between Rt. Hon. Chibuike Rotimi Amaechi (claimant/appellant) and the Governor of Rivers State; Attorney General of Rivers State; Judicial Commission of Inquiry and 7 others (defendants/ respondents).

“On the 14th of July 2015, our client caused to be issued an originating summons against the Governor of Rivers State, the Attorney General of Rivers State, the Judicial Commission of Inquiry and 7 others before the High Court of Rivers State, presided over by Hon. Justice S.C. Amadi in suit No. PHC/189/2015 between Rt. Hon. Chibuike Rotimi Amaechi vs. The Governor Of Rivers State & 9 Others, wherein he challenged the competence and powers of the Hon. Justice G.O. Omereji Judicial Commission of Inquiry to carryout judicial function of investigating him and making pronouncements thereof, instead of the authorities established by law to do so. However, Hon Justice S.C. Amadi on the 20th of August 2015 dismissed the suit on very spurious and unjustifiable grounds. This led to the appeal referred to above.

Meanwhile, the former governor has challenged the state government to go to court over the report of the state judicial commission of inquiry which has indicted him for misappropriation of state funds.

He said that witnesses paraded by Governor Wike were tutored on what to say and what not to say all in an attempt to wrongly indict him.