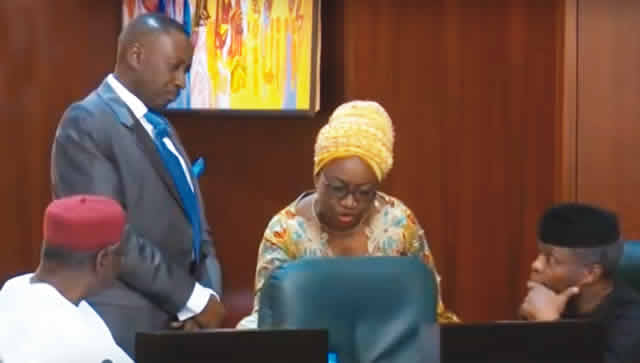 President Muhammadu Buhari on Wednesday summoned his Chief of Staff, Abba Kyari, and the Head of the Civil Service of the Federation, Winifred Oyo-Ita, over their clash at the Council Chambers of the Presidential Villa, Abuja.

The fierce crossfire between Kyari and Oyo-Ita, which occurred shortly before the Federal Executive Council meeting, was believed to have been caused by the leaked memo, which Oyo-Ita sent to Kyari on the controversial reinstatement and posting of the embattled former chairman of the Pension Reforms Commission, Abdulrasheed Maina.

A source at the meeting said Kyari accused Oyo-Ita of leaking the memo, which she wrote to the CoS on the reinstatement of Mr Abdulrasheed Maina into the Civil Service.

In the memo, which was exclusively published by The PUNCH on Tuesday, Oyo-Ita said that she warned the President against asking Maina to return to the civil service, saying doing so could affect the anti-corruption war of the Federal Government.

Oyo-Ita, it was gathered, also accused Kyari of being the brains behind the leakage.

The altercation occurred in the presence of Vice-President Yemi Osinbajo; President of the Senate, Bukola Saraki; Speaker of the House of Representatives, Yakubu Dogara; National Chairman of the All Progressives Congress, John Odigie-Oyegun; service chiefs and ministers.

Saraki, Dogara, Oyegun and the service chiefs were present to witness the inauguration of  the new Secretary to the Government of the Federation, Boss Mustapha, as well as the launching of the 2018 Armed Forces Remembrance emblem.

A Presidency source, who spoke to our correspondent on condition of anonymity on Wednesday, said the President was embarrassed when he was briefed about the altercation between Kyari and Oyo-Ita.

He said even the presence of the Vice President did not deter the two officials from the clash.

In the memo, Oyo-Ita had claimed that her warning was based on the implications Maina’s reinstatement would have on the anti-corruption war of the Federal Government.

The memo, titled, ‘Re: Abdulrasheed Abdullahi Maina,’ was received in the office of the Chief of Staff to the President on October 23.

The President had directed the HoS to investigate the circumstances that surrounded the return of Maina to the civil service.

He gave the directive following the public outcry that trailed Maina’s reinstatement.

Maina, whose whereabouts are still unknown, has been accused of embezzling pensioners’ funds running into billions of naira and is currently under investigation by the Economic and Financial Crimes Commission.

Explaining further, the HoS said she met the President after the Federal Executive Council meeting on Wednesday, October 11, and verbally warned Buhari against bringing Maina back to the service.

She, however, did not say what the response of the President was after briefing him.

Oyo-Ita said, “Please, note that the OHCSF was never in agreement with the reinstatement and consequently never conveyed the approval of the FCPC to Mr. A. A. Maina, nor approved his posting to the Ministry of Interior or any other MDA.

“Rather, I sought audience with His Excellency, Mr. President on Wednesday, 11th October, 2017 after the FEC meeting where I briefed His Excellency verbally on the wide-ranging implications of the reinstatement of Mr. A. A. Maina, especially the damaging impact on the anti-corruption stance of this administration.”

The letter also read, “Further to your letter Ref. SH/COS/100/A/1570 dated 23rd October, 2017 on the above subject matter, I write to inform you of the circumstances leading to the irregular recall of Mr. Abdulrasheed Abdullahi Maina.

“I wrote to place on record the following facts as it permits (sic) to Mr. A. A. Maina who was dismissed from service on 21st February, 2013.

“The move to recall Mr. A. A. Maina was at the instance of a series of letters from the Attorney General of the Federation to the Federal Civil Service Commission requesting the commission to give consequential effect to the judgment that voided the warrant of arrest issued against Mr. A. A. Maina, which formed the basis for the query and his eventual dismissal.

“The letters herewith attached as Annexes I-III are:

“The FCSC thereafter requested that the Head of the Civil Service of the Federation should advise the Permanent Secretary, Ministry of Interior to consider the AGF’s letter and make appropriate recommendations to the commission and this was so communicated to the Ministry of Interior.

“The Ministry of Interior took the matter to the Senior Staff Committee of the ministry and recommended the reinstatement of Mr. A. A. Maina into the service as Deputy Director.

“The OHCSF forwarded the recommendation to the FCSC which has the constitutional responsibility for appointments, promotion and discipline for further action.

“The FCSC in consideration of the letter from the AGF and the recommendations of the SSC of the Ministry of Interior consequently approved and conveyed the reinstatement of Mr. A. A. Maina with effect from 21st February, 2013 vide letter herewith attached as Annex IV.

“Please note that the OHCSF was never in agreement with the reinstatement and consequently never conveyed the approval of the FCSC to Mr. A. A. Maina nor approved his posting to the Ministry of Interior or any other MDA. Rather, I sought audience with His Excellency, Mr. President on Wednesday, 11th October, 2017 after the FEC meeting where I briefed His Excellency verbally on the wide-ranging implications of the reinstatement of Mr. A. A. Maina, especially the damaging impact on the anti-corruption stance of this administration.

“However, I have requested the Permanent Secretary, Ministry of Interior, to provide any documentary evidence to support the claim of reinstatement and posting of Mr. A. A. Maina by OHCSF, since after his dismissal.

“The letter to the Permanent Secretary, Ministry of Interior is attached as Annex VI. The foregoing is accordingly submitted for your information and further consideration.

“Please accept the assurances of my best regards.”

An ad hoc committee of the House of Representatives confirmed on Wednesday that it was set to begin investigations into the circumstances surrounding the reinstatement of the former Chairman, Presidential Task Force on Pension Reforms, Mr. Abdulrasheed Maina.

The House had resolved on Tuesday last week to probe the Maina scam following a motion moved by the Chairman, Committee on Interior, Mr. Jagaba Adams-Jagaba.

The Speaker, Mr. Yakubu Dogara, named some lawmakers to serve on the Madaki panel.

Asked to give an update on the probe, Madaki said, “We are doing pre-sitting meetings before we invite them.”

Findings by The PUNCH on Wednesday indicated that top on the list of persons to be invited by the panel was the Attorney-General of the Federation and Minister of Justice, Mr. Abubakar Malami.

Also to be invited is the Head of Civil Service of the Federation, Mrs. Winifred Oyo-Ita, Maina and other persons involved in the matter.

In its resolution to probe the case, the House had also directed the Economic and Financial Crimes Commission to immediately arrest and prosecute Maina to “serve as a deterrent to others who might have corrupt tendencies.”

President Muhammadu Buhari had a day before the resolution, ordered the sack of Maina after the news of his resumption of duty as a director in the Ministry of Interior, reportedly embarrassed the Federal Government.

The House specifically resolved to investigate the “disappearance, reappearance and subsequent reinstatement/promotion” of Maina after the EFCC had initially been on his trail.

The House motion read partly, “The House recalls that Maina fled this country to the United Arab Emirates in 2013 to avoid arrest and prosecution.

“The House also recalls that he was formerly sacked from his position as an Assistant Director in the Ministry of Interior in 2013 by the administration of (former President) Goodluck Jonathan.

“The House is concerned that Maina came back from self-imposed exile and was posted to his former ministry of interior and given double promotion from Assistant Director to Acting Director.

“The House is aware that President Muhammadu Buhari has directed his sacking from the Federal Civil Service with immediate effect.”

Various groups and individuals on Wednesday warned the Federal Government against any attempt to intimidate the Head of Service, Mrs. Winifred Oyo-Ita over the leaked memo on the Abdulrasheed Maina saga.

Speaking on the issue, the convener of the Coalition of Northern Politicians, Academics, Professionals and Businessmen, Dr Junaid Mohammed, said the “verbal tirade” against Oyo-Ita by the President’s Chief of Staff, Abba Kyari, was obviously an attempt to intimidate her into silence.

He said, “This shameless act by the Chief of Staff clearly shows you how desperate this administration can get. Most of the questions we as Nigerians have been asking about what Mr. President knows about this whole Maina saga have been answered by this leaked memo.

“We have been asking what does Mr. President know about this whole thing and when was it brought to his attention? Unless he comes clean, no attempt by a chief of staff to intimidate a thorough bred career civil servant whose record of performance he can never match can wash this administration clean of this crime against the Nigerian people.

“If anybody feels strongly about what she said in her reply to the query issued to her such a person should produce a superior counter-argument instead of trying to intimidate her into silence. Nigerians are watching. This woman was queried, she merely replied, what tells you that it was not members of the cabal that leaked the document to make her look bad?”

The Committee for the Defence of Human Rights has also flayed Kyari for attacking Oyo-Ita, saying it was an embarrassment to the Buhari administration.

The CDHR President, Malachy Ugwummadu, said, “The Maina issue has become very scandalising and embarrassing. It is not unexpected. Some of us have repeatedly expressed our resentment over the poor coordination of the entire affairs of this government.

“The height of that resentment was the show of shame that characterised the altercation and near fisticuffs of the Chief of Staff and the Head of Service. I think the President at this point needs to address the drift.”

The Director, Centre for Anti-Corruption and Open Leadership,  Debo Adeniran, however, said, “What happened between Abba Kyari and Oyo-Ita was a private discussion which we should not worry about, except Kyari was seen to be an interloper in matters which concern the President.”

Maina hiding to save his life  – Aide

Mr. Olajide Fasakin, who is one of the aides to the embattled former chairman of the defunct Presidential Task Force on Pension Reform, Mr. Abdulrasheed Maina, has said his boss was hiding to protect himself from being killed.

Fasakin claimed that some people were after Maina’s life, saying they attempted to assassinate him during the administration of Dr. Goodluck Jonathan.

Fasakin, who stated this on Wednesday while featuring on Channels Television, insisted that he did not know the whereabouts of the embattled former pension reform chairman.

He said the people that wanted to kill him shot at him five times, adding that it was after the shooting that he had to go underground.

When asked whether Maina would come out if the Senate President promised to protect his life, the aide said, “I would not advise him to come on the basis of the fact that there was a petition against some members of the 7th Senate of having collected some N3bn from the pension thieves. The petition is with the ICPC and the EFCC; we haven’t got the report up to this moment.

“ The only way out, most likely, would have been for Mr. President, in his position as the President of the country to put together a commission of enquiry like Justice Chukwudifu Oputa Panel, do all the activities on the television, then we would advise him to come out.”