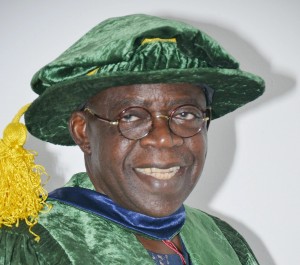 Tinubu, who is a former governor of Lagos State, said this at the 70th birthday anniversary of social commentator and National Democratic Coalition chieftain, Prof. Segun Gbadegesin, in Lagos on Monday.

He recalled that in 2011, his party, the Action Congress of Nigeria; Congress for Progressive Change and the All Nigeria Peoples Party presented separate presidential candidates and the PDP leveraged on the small size of these parties.

Tinubu said there was also a tendency for the leaders of smaller parties to make themselves the presidential candidates of their respective parties thereby causing division within their parties.

He said ahead of the 2015 election, however, leaders of the legacy parties (ACN, CPC and ANPP) that formed the APC, including himself, had to suppress their personal ambitions to be able to “chase away the PDP government led by former President Goodluck Jonathan, because in the past those who float political parties end up as its chairman and presidential candidate.”

Tinubu, who was also part of the NADECO campaign from exile, told the audience that progressive politics was the answer to the problems of Nigeria and that the hope and confidence Nigerians had in the APC before the elections would not be dashed

Also speaking at the launch of Gbadegesin’s book, titled “All The Way: Serving With Conscience”, a former Governor of Ogun State, Chief Segun Osoba, praised the contribution of Gbadegesin to the pro-democracy struggle, with the programmes he anchored in Yoruba Language on the defunct Radio Kudirat.

Osoba described Gbadegesin as a peacemaker saying, “He visited me the other day, to plead that I should reunite politically with my estranged APC family.”

Gbadegesin, a Professor of Philosophy, was the Head of Department of Philosophy and Dean, College of Arts and Sciences, Howard University, Washington DC, United States, who worked as an undercover operative in the dark days of the Gen. Sani Abacha military dictatorship as one of the main anchors of Radio Kudirat; the propaganda organ of NADECO.