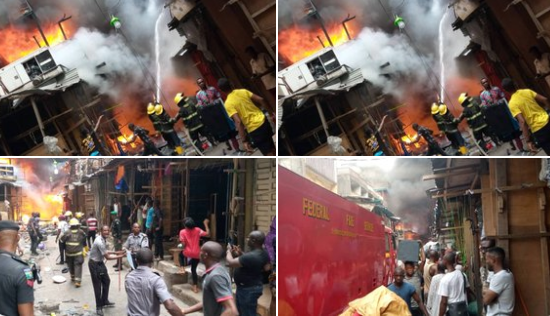 Goods worth millions of Naira has been lost at the popular Balogun market fire outbreak, which occurred for the 5th time in 4 years, on Sunday morning.

According to eye witnesses, the fire started from one of the nearby buildings in the area, even though the reason for the outbreak is yet to be ascertained.

The operatives of the Lagos State Emergency Agency (LASEMA), Lagos State Fire and Rescue Services and other responders played their parts as they were deployed to the scene of the Balogun Market Fire outbreak to put out the fire.

According to the permanent Secretary of LASEMA, Dr Femi Oke-Osanyintolu, as at 1pm on the day of the fire disaster, operations were still going on as firefighters and first responders fought to quench the fire.

Hear him: ‘The agency responded to distress calls concerning the above location and upon arrival at the scene, a shop on the top floor of a four-storey building was found to be gutted by fire.’

‘Further information gathered revealed that clothing materials were stored inside the shop.’

‘Fortunately there was no casualty involved in the incident. The agency’s responders alongside the Federal Fire service, Lagos State Fire service and UBA fire services are joint responders working together to put out the fire and prevent its spread to nearby buildings. Operation ongoing,’ he said.

Recall that the Balogun market fire outbreaks recorded so far in the past four years has happened 5 times with  similar incidences in 2019, 2020,2021, early 2022 and now, October 2022. Each time it happened, people lose money and goods running into millions.

In reaction to the unfortunate incident, the Director of the Lagos State Fire Service, Maria Adeseye noted that the Fire service officers met the inferno at the fourth floor where the fire started while already fast spreading to the fifth and sixth floors of the building.

She further stated: ‘The intensity of the fire requires the deployment of the Aerial Ladder Platform Fire Apparatus to extend the firefighting prowess to capture the highrise spread and curtail it from adjoining buildings, which aim was achieved as it was confined to house 43’.

‘The free burning textile materials content stored in defiant to Fire Safety Regulations is responsible to fuelling the intensity which has been curtailed. The preliminary cause of the fire is as a result of electrical upsurge’.

‘There was no injury nor casualty recorded as damping down of echelon of fire is ongoing and subsequent updates will be made available as situation demands,’ she said.

According to reports, after the last time the Balogun market fire outbreak occurred, the plaza was reconstructed and the traders, moved  back in and moved on with their lives, notwithstanding the loss they incurred. Shortly after this, another outbreak occurred.

Angered by the latest fire, some traders threatened to stone the owner to death, with claims that she was responsible for their unfortunate losses caused by the fire. One of the traders retorted: ‘This is the fifth time this is happening to this building. Every time it happens, she comes here and starts shouting ‘Thank you Jesus, Hallelujah. If we all get a hold of her, we will definitely stone her to death.’