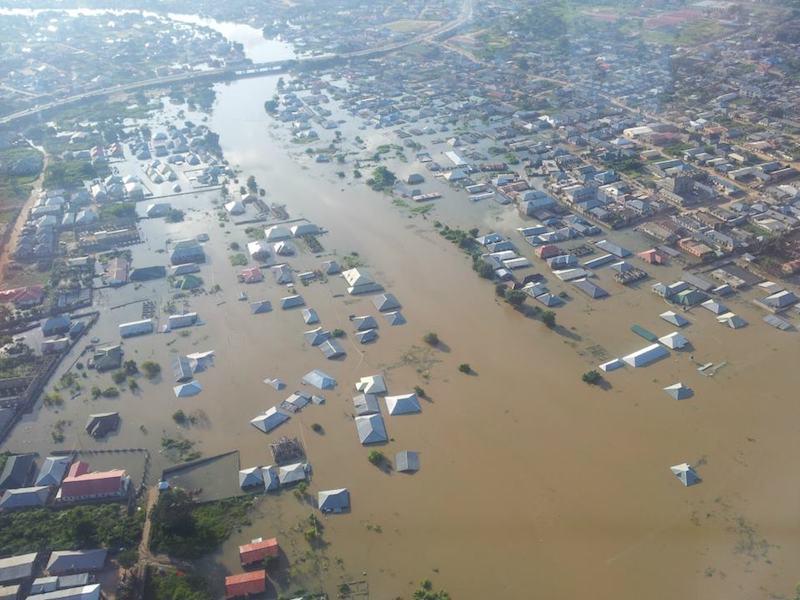 The National Emergency Management Agency (NEMA), had warned, two months ago, that about 13 states in Nigeria would be affected by severe flooding as the Kainji, Shiroro and Jebba dams, all situated in Nigeria will overflow, but would be made worse by the opening of the Cameroon Dam.

According to the NEMA Director, Mustapha Ahmed, the affected states that would be flooded were Adamawa, Edo, Delta, Bayelsa, Rivers, Cross River, Taraba, Kogi, Niger, Kebbi, Nasarawa, Anambra and Benue. He went ahead to state that the Nigerian dams would overflow between September and the end of October but would face a worse overflow when the Cameroon Dam is opened.

Hear him: ‘Based on our communication with the Nigeria Hydrological Services Agency (NIHSA), the Lagdo Dam operators in the Republic of Cameroon have commenced the release of excess water from the reservoir by 13th September 2022.’

‘We are aware that the released water cascades down to Nigeria through River Benue and its tributaries thereby inundating communities that have already been impacted by heavy precipitation.’

‘The released water complicates the situation further downstream as Nigeria’s inland reservoirs including Kainji, Jebba, and Shiroro are also expected to overflow between now and October ending according to NIHSA.’

‘According to NIHSA, Kainji and Jebba dams have already started spilling excess water from their reservoirs.’

‘This will have serious consequences on frontline states and communities along the courses of rivers Niger and Benue.’

The warnings give by the NEMA DG has come to pass as Nigeria presently battles with the menace of flooding and displacement in different states, trailed with displacement of people and destruction of property in humongous proportions.

Benue state, which is regarded as the food basket of the country has been hard hit by the flooding problem, as several hectares of farmlands were destroyed and livelihoods affected since September after recording 3.274 victims of the flood and 1,213 houses destroyed, while farmlands and crops were greatly affected.

In Jigawa state, 92 people lost their lives from the effects of the flood, aside from the destruction of property infrastructure and the loss of livelihood.

Anambra state is not left out as 651,953 people were displaced by the flood in six local government areas.

Recently, the Federal Capital Territory, Rivers State, Ebonyi State, Bauchi and Bornu States were also affected by the menace of the flood. Kogi State, however has been worse hit. The casualties remain untold while the level of destruction of property and infrastructure are unquantifiable. The Kogi state Governor, Yahaya Bello has appealed to the federal government to declare a state of national disaster due to the flooding situation.

His words: ‘flooding has affected the nine local government areas which lie along the Rivers Niger and Benue, namely, Lokoja, Kogi-Koto, Ajaokuta, Ofu, Igalamela-Odolu, Bassa, Idah, Ibaji and Omala. Ibaji is almost 100% under water while the rest range from 30% up. Other inland LGAs also have some degree of flooding from smaller rivers and tributaries.’

The warning issued by the NEMA DG concerning the effects of the opening of the Cameroon Dam was not the first hearing, as such warnings had been given in the past in 2012 and 2015, respectively. Some states in Nigeria are usually flooded whenever water is released from the Cameroon Dam. This was why the Nigerian  government was advised to carry out a similar project along River Benue. It is however yet to do so.