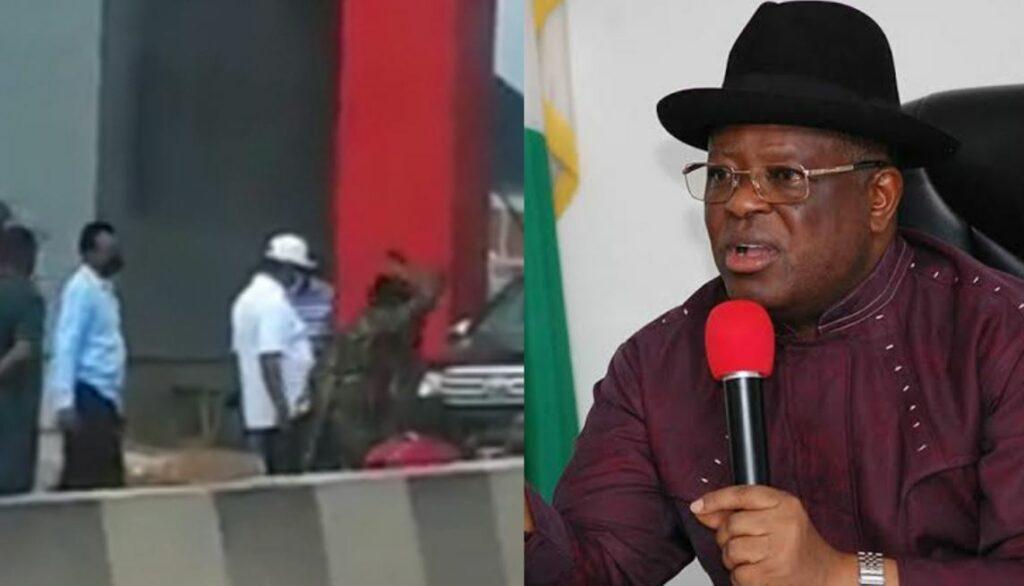 Nigerians have continued to react to the alleged flogging of people believed to be civil servants at the site of the ongoing Ebonyi Airport project at Onueke, in the Ezra South Local Government Area of the state, by officers believed to be security details of Governor Dave Umahi as shown in the viral video that is presently making the rounds in social media.

In the video recording which has since been widely condemned in and out of the state, some people were flogged and asked to sit on the bare floor of the airport site, allegedly on the prompting of Governor Dave Umahi, because they reported late to work.

According to a lawyer and human rights activist in Ebonyi state,Barr Steve Uganda, It was a most unfortunate situation and highly demeaning of an elected governor.

His words: ‘I have watched the video and it is clearly evident that it happened right in the presence of the governor. It’s utterly disgusting. There are better ways of punishing civil servants who came to work late.’

‘For an elected governor to order the flogging of citizens in the manner as portrayed in the video is very unfortunate. It should never have happened and all right-thinking citizens of the state have to condemn it. It’s so demeaning.’

‘Our governor keeps doing things that will rubbish the good works he has done. It’s my hope that those he flogged will take steps to seek redress in appropriate courts.’

As for the state Publicity Secretary of the People’s Democratic Party (PDP), Chika Nwoba, he posited that Umahi, has by his actions, shown that Ebonyi state is becoming a junta in his regime by ordering military security men to flog civil servants. He described the governor as a military ruler in a democracy, adding that his APC governorship candidate, Francis Nwifuru, was watching him and most likely, learning the art of brutish governance.

This was his post on his Facebook page, Tuesday night: ‘Governor David Umahi visited the Ebonyi airport site in Onueke by 7:30 am today. He ordered that the gate be closed against workers arriving at the site after him. He ordered his military men to flog each of them with 7, 12, and 18 strokes of the cane. All the workers and civil servants rolled on the muddy floor and were flogged like common criminals. The elders amongst them cried aloud to no mercy.’

‘Is it wrong having a worker coming to a
construction site by 8 and 8:30 a.m from Abakaliki to Ezza South/North LGAs, where the site is located?’

The former Commissioner for Information and PDP stalwart, Abia Onyiuke, also described the situation as ‘barbaric, Primitive and brutal’.
Hear him: ‘The civil servants allegedly came to work late or violated laid down rules of the service; then there are laid down rules also, about measures that should be taken with regards to punishment. They are supposed to be queried by their unit heads. It’s the civil service rule that stipulates the punishment that should be handed out to them, not the governor.’

‘I have always held the view that Governor Umahi is a very lawless leader. And maybe, if he has his way, he can even become a brutal dictator. So what we are seeing is a manifestation of those very crude tendencies that we have often talked about. And it’s very regrettable that up till this moment, he is yet to be refined, and has continued in his old ways even few months to the end of his 8-year tenure, as governor of Ebonyi State.’

‘Ebonyi people should get ready to vote against the governor’s party, which is the APC. They should vote against candidates of the governor’s party because the governor is very ‘influential’ and he influenced the primaries of the APC. Some of the leaders, who have been given tickets are people who have the same mentality as the governor and so, there is no way the state can develop properly with people like that who are still desirous of taking over from him. The crises we have witnessed under Umahi will continue if we allow people like him to take over the state as the next leaders. Let Ebonyi people vote against his party and give PDP a chance to reclaim the state as before. Umahi is fighting to be a Senator in Ebonyi South Zone; he should not be allowed. I employ Ebonyians not to vote for him’.

The state government has however, denied the accusations, saying that the video was a manipulation of an aborted attempt by miscreants to block the airport gate. He issued a statement to that effect and part of it read: ‘Our attention has been drawn to doctored footage purporting to be Civil Servants rolling on the ground and being flogged by security personnel in the presence of the Governor of Ebonyi State while on inspection at the Government House gate, Abakaliki as reported in Sahara Reporters publication and shared widely in different social media platforms and accepted line hook and sinker by the gullible.

‘We wish to inform members of the public that the purported footage is a video manipulation of an aborted attempt by miscreants to block the Airport gate and inflict fear on those working at the ongoing International Airport and possibly embarrass the Governor who was on a routine inspection visit to the Airport project, in guise that they were enforcing sit-at-home- order at the premises of the Airport on Tuesday, 4th September 2022.’

‘It would be recalled that miscreants had in the past tried to attack those working at the Airport site and their plots were neutralized’.

‘Contrary to the fake report that the incident happened at the gate of the Government House in Abakaliki while the Governor was under supervision, the miscreants were dispelled at the gate of the new Airport under construction. It is to be noted that no Civil Servants or employees whatsoever have been recruited to work in the Airport and so no Civil Servant was flogged at the Airport gate, contrary to the impression in the trending report. We are therefore surprised at the basis of the unintelligent fabrications of the mischief makers.’