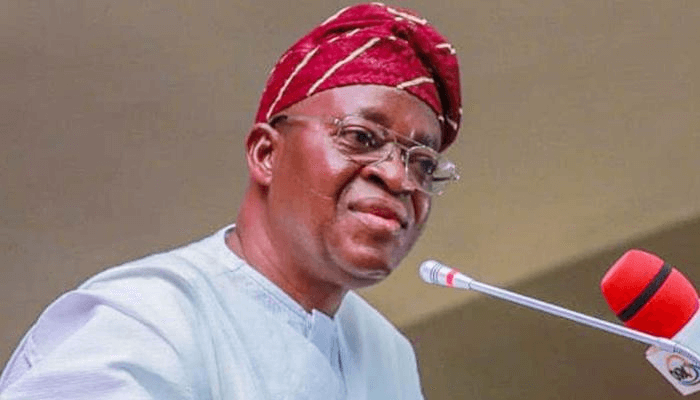 Osun State Governor, Gboyega Oyetola has insisted that he remains the winner of the Osun State governorship election and will reclaim his mandate at the election petition tribunal.

Speaking, at the 31st Iragbiji Day in Iragbiji, Boripe Local Government Area of Osun State, over the weekend, Oyetola reiterated that because he is the winner and would reclaim his rightful mandate, he was hopeful that he would attend the 32nd edition of the Iragbiji Day celebration as the Osun State Governor.

Hear his words: ‘I congratulate us all on this memorable and rewarding 31st Iragbiji Day even as we pray to God for a more eventful 32nd version. By the special grace of Allah, Insha Allah, I shall grace this occasion next year, still as the Osun Governor. I have no doubt in my mind that I shall reclaim my mandate.’

Recall that after the keenly contested Osun State governorship election on July 16, Ademola Adeleke who was declared winner by the Independent National Electoral Commission (INEC), polled 403,271 votes against Oyetola who polled 375,027 votes.

Ever since the results were announced, Oyetola and the All Progressives Congress (APC) have been challenging results from 749 polling units in 10 Local Government Areas, over alleged election malpractices, especially over-voting. They submitted a petition before the election tribunal in Osogbo on August 5th to that effect.

On his part, Ademola  Adeleke has told Oyetola that he had no mandate to reclaim, having been clearly defeated at the July 16 poll. Speaking through a statement released by his spokesperson, Olawale Rasheed, he stated that Osun State has witnessed a rabid pillaging since after the election, while describing Oyetola’s petition as unfounded, baseless and more like ‘the antics of a false democrat whose role model are little tyrants snd Trumpists of this world’, especially as many lies told by Oyetola on the governorship tribunal had been exposed.

The statement partly read: ‘From media trial to outright sponsorship of falsehood against proceedings at the tribunal,  Oyetola and the All Progressive Congress, APC, have practically abandoned diligent prosecution of their petition while chasing shadows with unrelated and unpleased applications and submissions.’

‘Oyetola has been exhibiting the highest level of leadership hypocrisy in recent Nigerian history as he supervises last minute ruining of the state while parroting his false hope of reclaiming a non-existing mandate.’

‘You know you are going. You are emptying the treasury and laying bobby traps for Osun people. Yet, you mount rooftop every now and then to deceive your gullible associates and accomplices in political banditry.’

‘Our message to you and your team is simple. This is your last week in Government House. Pack all what you want. But be rest assured that every official, elected or appointed, who partakes in the diversion of our common patrimony, will have their day before people’s panels of inquiry.’