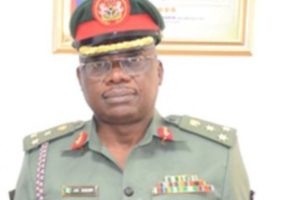 The Defence Headquarters, Abuja, on Monday, said no troop had been deployed in Benue and other states as recommended by the Vice President Yemi Osinbajo’s committee on herdsmen crisis.

The Defence Director of Information, Brig-Gen John Agim, said the police were on the ground in the states, stressing that the military were the “last line of defence.”

The Osinbajo committee, which was set up by the National Economic Council to find lasting panacea to the killings by herdsmen across the country, recommended increased military presence in Benue and other states affected by the attacks.

But Agim said the decision had not been communicated to the military.

He said, “The report just came out. They (the troops) have not moved in. You will recall that the Federal Government asked the Inspector-General of Police to move into Benue State. I have seen the report that the military are going to be given more roles; but that was just yesterday.

“There is a laid down rule and regulation. The military are the last line of defence. We cannot become the police. It is only when the police go in and they find it difficult that we move in. In a normal situation, the state governor will ask the President, who will take the request to the National Assembly before military is deployed.”