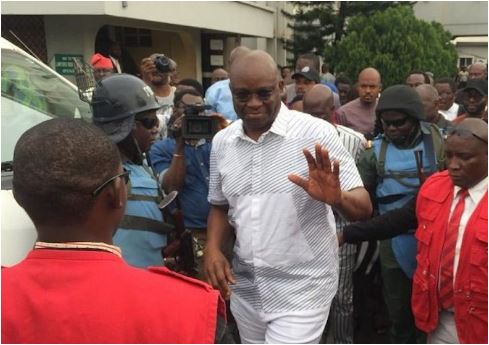 FORMER governor of Ekiti State, Mr. Ayodele Fayose was, yesterday, released from Ikoyi prison after complying with the conditions set for his bail by the court.

Fayose was arraigned before a Federal High sitting in Lagos last week on an 11 count charge of conspiracy and money laundering amounting to N2.2 billion.

He was granted bail in the sum of N50 million after he pleaded not guilty to the allegation contained in the charge against him.

His words: “I was with Fayose today (yesterday) and I can confirm to you that all the conditions set for his bail has been met. I can tell you that he is in high spirit. He promised me that he will continue to fight on behalf of the Nigerian masses.

“He vowed that he will fight impunity in this government to a standstill. He affirmed to me that he is stronger now and more determined to fight lawlessness. He asked me to get it out there that he is not one of those that can be intimidated with the EFCC.”

Olayinka said the former governor will return to court on November 16.