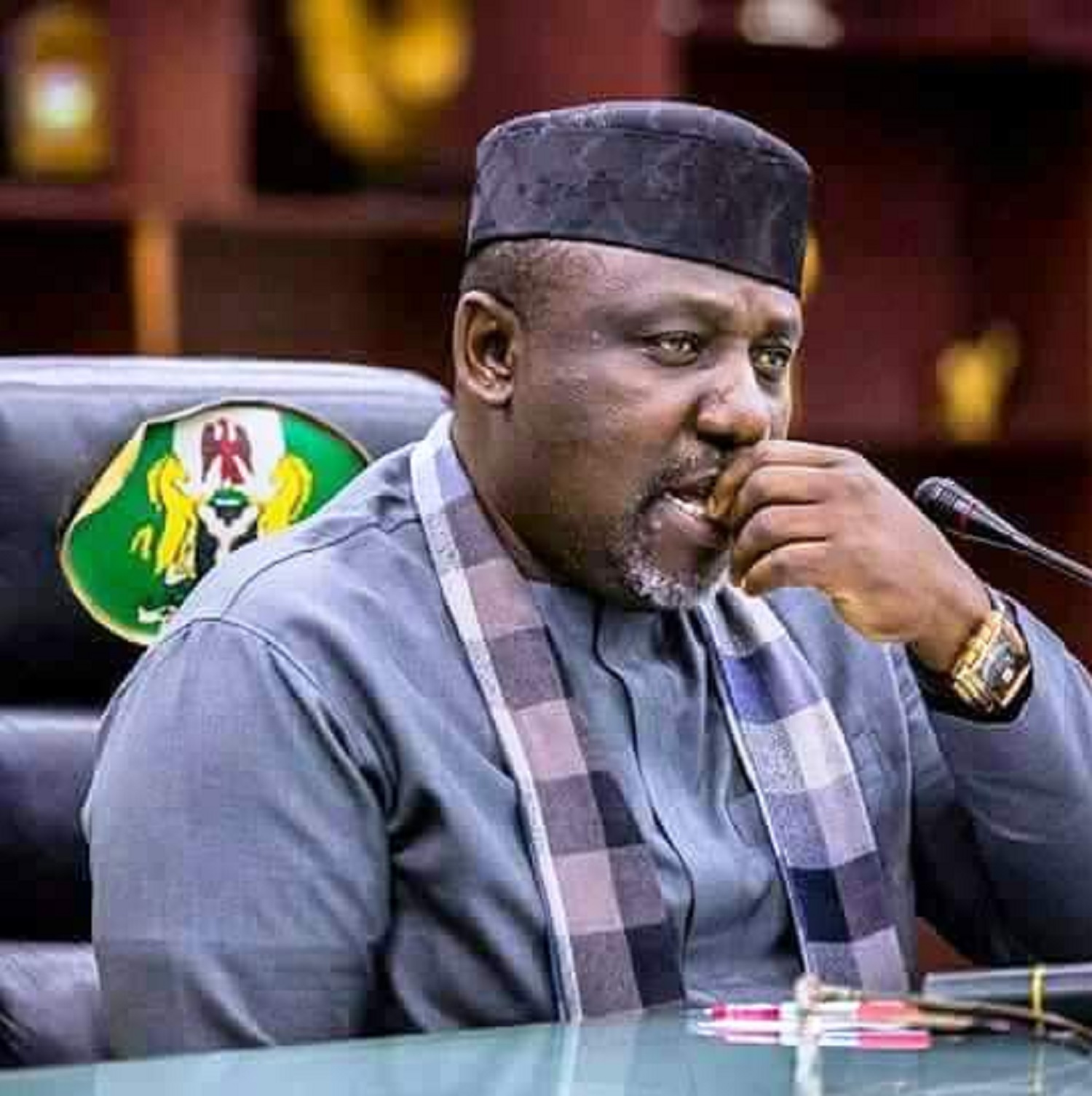 Drama has played out in the South East as officers of the Economic and Financial Crimes Commission, EFCC arrest Rochas Okorocha, former Governor of Imo State, Tuesday, at his residence.
In what can be described as a commando operation, the EFCC operatives broke down the doors of the former governor’s residential home with large stones and heavy equipment, which shattered the building ceilings and glass panels during the arrest operation.
During the stampede that ensued after a sustained duel between Okorocha’s supporters and security personnel, one of his sons sustained injuries.
Just before the EFCC arrested Rochas Okorocha, he was seen lying on the floor in a viral video, saying that the EFCC and gunmen had invaded his residence.
His words: ‘the EFCC operatives are here with some gunmen. They have broken all my bullet proof doors. This may be my last appearance because I don’t know what they want to do.’
In a statement however released by the anti-graft agency, they merely invaded his residence to affect his arrest.
According to the agency’s spokesman, Wilson Uwujaren, the fact that EFCC arrests Rochas Okorocha forcefully was because the former Governor had earlier jumped administrative bail and refused to honour invitations by the Commission.
Hear him: ‘the move followed the refusal of the former Governor to honour invitations after jumping the administrative bail earlier granted him by the Commission.’
In the circumstances, the Commission is left with no option than to effect the arrest of Senator Okorocha and bring him to trial.’
The statement issued by the EFCC also noted that Senator Okorocha was facing charges over diversion of public funds which amounted to N2.9bn.
It partly states: ‘EFCC had on January 24, 2022, filed a 17-count criminal charge bordering on diversion of public funds and properties to the tune of N2.9 billion against Okorocha.’
‘The case was assigned to Honourable Justice Inyang Ekwo of the Federal High Court, Abuja but attempts to arraign Senator Okorocha were twice stalled owing to the absence of the ex-governor who evaded service of processes.’
‘At the last adjourned date, March 28 2022, Justice Ekwo before adjourning until May 30th 2022, had warned that it was ‘the last adjournment I shall grant in this matter.’
‘In the circumstances, the Commission is left with no option than to effect the arrest of Senator Okorocha and bring him to trial’, the anti-graft agency added.
During the siege, however, the embattled senator addressed some journalists in his house and alleged that the EFCC was merely trying to frustrate his presidential ambition and specifically accused them of preventing him from attending the APC screening of Presidential aspirants in Abuja.
The screening was earlier scheduled to hold on Tuesday but was eventually postponed indefinitely. The embattled Okorocha is one of the 25 APC aspirants seeking for the party’s ticket for presidency.
Meanwhile, legendary entertainer and activist, Charlie Boy has frowned against the approach used by the EFCC in arresting Senator Rochas Okorocha.
While condemning the act of the EFCC breaking into the home of the former Governor, he described it as jungle Justice.
Hear him on Twitter: ‘there is no love lost between me and Rochas Okorocha, I can’t stand him along with most Nigerian politicians. But dis is wrong, dis is jungle. No be the same EFCC we know. What’s all this kind of over-gallantry. Only in Nigeria.’
QUICK SHARE: