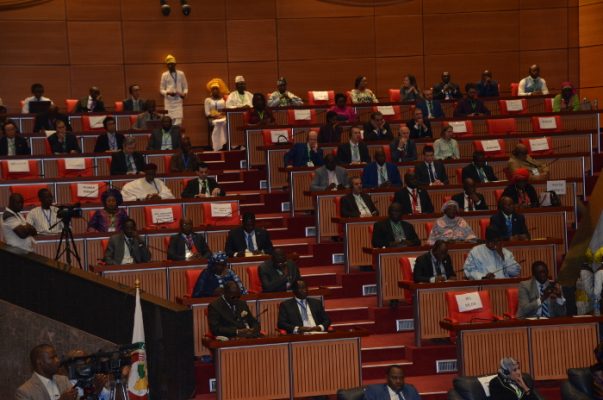 Only four out of 35 Nigerian representatives to the ECOWAS Parliament were on Wednesday present at the presentation of the Nigerian Country Report at the First Session of the Parliament.

During the Ordinary Sessions of the Parliament, the 15 ECOWAS member nations present reports on their countries. The report bothers on the Political situation, Economic situation, Human rights situation and many more relating to their countries.

Our correspondent reports that only two representatives Hon. Ibrahim Sadiq who read the report and Hon. Mohammed Shaaba Lafiagi were sighted on the floor of the ECOWAS Parliament.

However, a member of Parliament from Ghana, Hon Opare-Ansah Frederick who observed the embarrassing absence of Nigerian representatives expressed displeasure that only four Nigerians were present for the report.

Fredrick particularly expressed displeasure at the absence of the Nigerians especially on a day when the Nigerian Country Report was being presented.

“Mr Speaker, on a day when Nigeria is presenting her country report, one would have expected that the representatives from Nigeria would be well represented.

“We see them here, but on a day when we are taking their report only four of them are here. In fact I saw one of them leaving right after the report,” he said.

On the issue of community levy, the Ghanaian MP joined many other members to call on Nigeria to play her big brother role and pay her community levy stressing that Nigeria was the biggest economy on whose shoulders the success or failure of ECOWAS laid the most.

Our correspondent reports that the issue of poor attendance by Nigerian representatives has been a recurring decimal.

Our correspondent reports that rather than step up their attendance, many Nigerian representatives still shunned the parliament. Some of them only come in, sign the attendance and leave story.

A particular Nigerian Representative from the South-South has gained popularity for coming late: and rather than sit and contribute to plenary, goes about exchanging pleasantries with other Members of Parliament who are going about their businesses.

Reacting to the interventions by other members of parliament, Nigeria representative, Hon. Lafiagi apologized for the very low turn-out of Nigerians.

He explained that the low turnout was almost unavoidable as the 2018 Budget of Nigeria was scheduled for passage in both chambers of the Nation’s National Assembly.

“It is particularly very bad today because budget this year had been delayed, the budget is being passed today in both houses. That is one reason why a lot of us are absent today.

“Another issue that causes this is because we are based here and the parliaments meet at the same time, that is why many of us go to attend, especially on a Wednesday when it is on live TV

“Saturdays’ attendance was poor because congresses were going on, so members have to go to their constituencies to organize for the congresses.

“I must also apologise for the absence of a lot of our colleagues. We will convey the message to let them know that their brothers are missing them,” he said.

Speaking on the non-payment of the community levy, Lafiagi stressed that the delay in the passage of the nation’s budget had affected the payment.

Read more at: https://www.vanguardngr.com/He however assured that Nigeria was committed to meeting up with its obligation with regards to the payment of its levies.