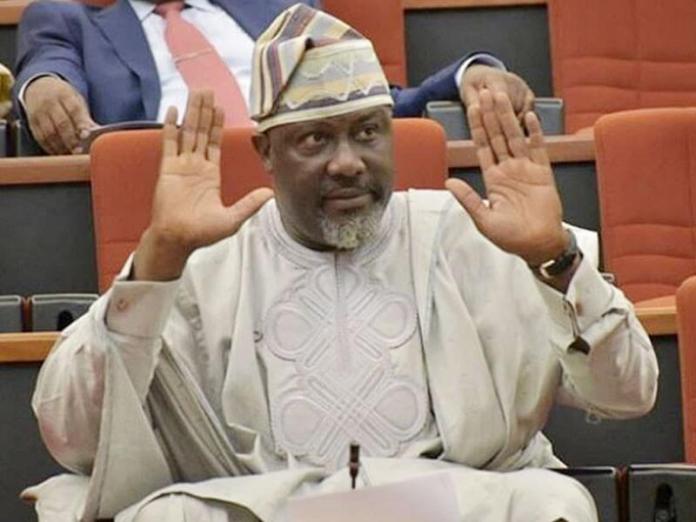 There was a mild drama thursday when operatives of the Special Anti Robbery Squad (SARS) stormed the premises of the Federal Capital Territory (FCT) High Court in Maitama, Abuja, to arrest the senator representing Kogi West in the National Assembly, Dino Melaye,
Melaye was arraigned before the court on a two-count charge for allegedly giving false information to the police.

He denied committing offence.
Justice Olasumbo Goodluck, granted him bail after listening to the submissions of his counsel, Mr. Ricky Tarfa (SAN), and the prosecuting counsel, Mr. Magaji Labaran.
The judge admitted him to bail in the sum of N100,000, a surety in like sum, who must not be below grade level 14 in the Federal Civil Service.

In addition, the surety must show evidence of where he resides in the FCT.
Justice Goodluck adjourned the case until May 16 and May 17 for commencement of trial.
In count one, the senator, was alleged to sometime in April 2017, deliberately gave false information to the police to frame Governor Bello’s Chief of Staff, Mr. Edward Onoja.

The senator had alleged that Onoja was the mastermind of the assassination attempt on him.
In the second count, Melaye was alleged to have given false statement of facts in a telephone conversation with Mr. Mohammed Abubakar.

The offences contravened the provisions of Sections 140 and 393 of the Penal Code.
However, after perfecting his bail conditions, Melaye was unable to leave the premises as operatives of SARS besieged the court premises to arrest him.
THISDAY gathered that the operatives searched all cars going out of the premises in their search for the lawmaker.

The senator was said to have hid himself in the court premises till about 7p.m when he was able to thwart the plans of the police to get hold on him.
THISDAY gathered that the lawmaker evaded the operatives by using an unknown outlet.
But some of his supporters who trooped to the court in solidarity with him, said he was sneaked out of the court.

“After the court refused the application of the federal government to refuse me bail, Governor Bello is using SARS and policemen from Kogi State Government House Lokoja to arrest and poison me on the way to Lokoja.

“You will recall that I alerted the nation two weeks ago that plans have been perfected to frame me up with fake charges by Kogi State Govt. My resolve is total. I shall not be intimidated. I will continue to speak the truth,” Melaye added.