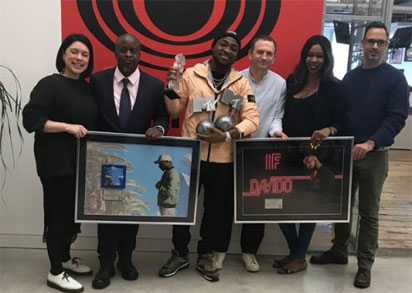 According to the Recording Industry Association of America (RIAA), this means ‘If’ has been sold or streamed one million times and ‘Fall’ has reached ten million record sales.

Davido shared a photo of himself with his awards and plagues on Tuesday through his Instagram page @davidooficial, writing:

“‘IF’ is officially Diamond and ‘FALL’ is officially Platinum in sales!!! My trophies finally came in as well! GOD IS REAL! Thank you Guys for making this happen!! Just getting started!!! Bless to my team @efe_one@asaasika@missamadi@sirbanko.”

The singer signed a record distribution deal with Sony RCA in the United States in 2016, a move that has led to his huge record sales.

The Plaques were presented at the Columbia Records UK office and Efe Ogbeni who executed the record deal for Davido with Sony was present.

The Managing Directors and President of Columbia UK Stacey Tang, Manish Arora and Ferdy Unger-Hamilton. Vanessa Amadi (Management) and Michael Ugwu were also present during the presentation of the Plaques.

Davido’s win came in shortly after he sold out his Brixton ‘O2’ Live show in London, on Sunday.