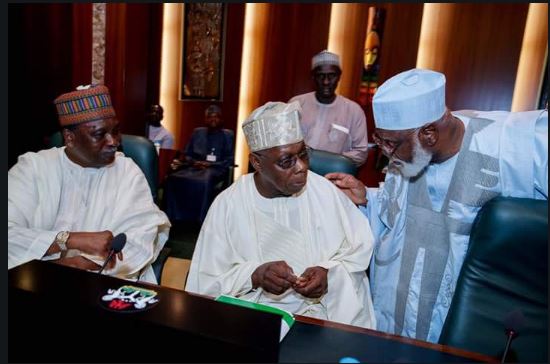 The Council of State, yesterday, endorsed $1 billion to boost agriculture and empower livestock farmers, including the Fulani herdsmen.

The council also recommended inter-state security joint operations to flush out bandits, especially those operating from the forests.

The meeting, which was attended by three former heads of state was centred on security, economy and electoral matters.

The governors said the Council of State endorsed the $1 billion to increase agriculture funding from the current $200 million.

The financial assistance to cattle farmers, they said, was not designed to support the rich livestock producers but movement of the existing herdsmen causing problems and incessant clashes with farmers.

The fund will be disbursed through Anchor Borrower and Commercial Agricultural Credit Scheme, CACS Programmes, to encourage diversification of the economy and promote food security.

Governor Ibikunle Amosun of Ogun State said council deliberated extensively on how to diversify the economy, efforts being made to pull Nigeria out of doldrums, efforts that had been made to move Nigeria out of recession and the progress being made.

He said while council commended efforts that were being made to revive the economy, especially how Nigeria moved from monolithic economy to a diversified one, it advised that agriculture funding should be improved from $200 million to $1 billion.

He said: “Council advised that we improve on the funding on agriculture. That the paltry sum of $200 million when compared to what is being pumped into the oil sector is insignificant.

“Council recommended that at least about $1 billion be pumped into agriculture. It noted how Nigeria moved the budget from about N4 trillion to about N8 trillion . It also noted that when this President came in, the prices oil had nose dived from $112 in 2014 to $30 in 2016.

He said: “On the security situation in the country, we received a very long brief from the National Security Adviser, ranging from farmers/herdsmen clashes, Boko Haram, militancy in the Niger Delta, kidnapping and cattle rustling.”

He said after deliberations, a lot of suggestions came forward, adding, “Farmers/herdsmen clashes were discussed thoroughly and we learnt that this takes three dimensions.

“First is the real farmers/herdsmen clashes, where the normal herdsman moves around with his cattle and get into a farmers land and eats up his crops. In some situations it’s pure banditry. Some of the pastoralists that are not herders, attack, steal and kidnap and that has to be defined as such. Some of them rustle cattles and move into the deep forests.

“And because of the thickness of the forests responds are usually very difficult. That was also discussed today and solutions were proffered on how to get deep into the forests, to check those bandits that hide and continue to commit havoc.

“So we understand and acknowledge these three aspects and all have different approaches in solving the whole problem. And from the discussions today, a lot has been done, solutions have been proffered and the government believes solution is near.

“The minister of agriculture also presented a position on how to resolve the first part of the farmers/herdsmen clashes, that is the actual migrating herdsmen that pass through towns and farms, eats up crops in the farms and create a lot of problems.

“He proffered a lot of solutions ranging from those states that have already designated cattle routes, grazing reserves and activating the grazing reserves to ensure the farmers and herdsmen live in harmony.

“Already, Kaduna State has visited Denmark with some Fulani leaders, to study a kind of livestock production with the aim of establishing same in the country.

“We believe it is possible and profitable to do and those states that want to key into this option can do so. Generally, we believe that every state has its own peculiar problem and each state will be analyzed and solutions will be proffered so that these farmers/herdsmen will be a thing of the past.

“That is what has been discussed and we believe that with the commitment shown at the council to bring this to an end is so clear and we believe we will put an end to these frequent clashes as most of the Governor were in council.”

The Anambra Governor, Willy Obiano said Council approved appointment of two non-legal practitioners to the Federal Judicial Service Commission and a national electoral commissioner for INEC and the 23 members of National Population Commission.

Explaining on the way the money should be utilised, Governor Amosun said, And the way this money is to be disbursed is through what CBN has been doing and what the minister of agric is doing.

There is this CACS program. there is ANCHOR Borrower, a lot of program they are bringing up such that people are guaranteed that as a farmer, whatever you grow somebody is there to take it from you, to process it and turn it to money.

“Besides that, it is good for us to have food security. Imagine if we cannot feed ourselves that is what is happening. But these days now the story is changing and positive too. So it is not that somebody is just going yo take money like that. You will do the application, you will go to your state assembly they have to approve, procedures and conditions must be met, nobody is just going to give you money to go and throw away.

“CBN in collaboration with the ministry of agriculture and trade and investment all of them are putting heads together to help our small and medium scale enterprises. All these our small holder farmers, we are helping them now.

“Indeed it was even mentioned that the $1 billion may not be okay, we are looking at maybe $2 billion, but of course, one billion dollars will be the starting point as against in two years now it was about $200 whereas if you compare what is being pumped to subsidies our oil and all of that it runs to even trillion.”

Speaking on the details on how to arrest insecurity in the labd, Governor Badaru said, “There are so many discussions on this ranting from how do we reduce out of school children, how do we create more employment, how do we bring youths to agriculture and other trades.

“And also we discussed the issue on those bandits that attack and go back to the forest. Usually before each state operates on a state by state basis. But because the forests are long and covers so many place, if operation is being taking place for instance in Kaduna, they move through the forest to Zamfara or Katsina.

“So it is advised now to have joint and sustained operation so that they will be flushed out of those forests, after that, see how best to create activities in the forests to prevent people from either kidnapping or rustling or stealing and run back to the forest and hide there.

“The challenges being faced by the military and other security agencies have been discussed and even the proliferation of different agencies that are not inter connected working together was discussed, all solutions were preferred and I believe those solutions will turn into almost permanent solution to the security challenges in the country and so also in the Niger Delta.”

On why government should support rich livestock producers, he said, “For those States that have grazing reserve, they will have support to provide veterinary services and other small services for the already existing herdsmen.

“For those States that have not enough land to do that, there will be some solution if they so desire by the federal government to create those ranches and the same group of Fulani will be there and not new livestock producers will be invited and be given support to develop new businesses.

“But we are just saying that $1 billion will be used to support agriculture. Livestock is part of that and I am sure these monies are being given as credit to the farmers to develop their own businesses and it is done for two reasons.

“First to boost the economy, second to act as import substitution mechanism so that we will stop to import milk, beef, chicken and all those things that come into the country.

“So it is not purely designed to support the rich livestock producers but to support the movement of those existing herdsmen that cause this problem and these clashes.”