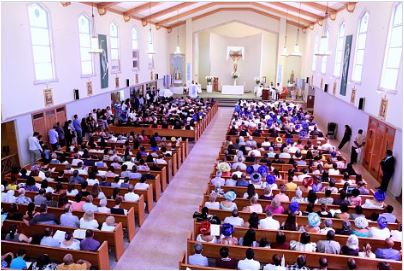 Top clergy from the Los Angeles Catholic Archdiocese led by former Los Angeles Archbishop Cardinal, Roger Michael Mahony Parishioners, members of the Nigerian Community, family and well-wishers all gathered at St. Bernard’s Catholic Church Bellflower on Saturday June 9th, 2019 to celebrate Reverend Father Mike Ekwutosi Ume’s 25th anniversary as a Priest. The mammoth crowd of over 1200 people was a testimony to the great impact that Father Mike has made on the community in the last 25 years 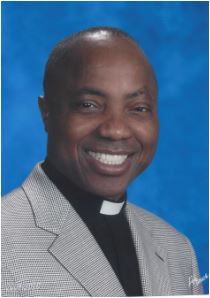 In his brief biography below, Father Mike in his own words narrated his Journey in last 25 years.

It all began one Saturday afternoon in June 1989 in the living room of Mr. and Mrs. Wilfred and Mary Ndubuizu. This couple had invited their friends, Mr. Chucks and Mrs. Bernadette Agu and Fr. Michael Ojiego Okpara, to lunch in their home. The relationship between these two families and the priest was a deep friendship. Fr. Okpara celebrated the wedding of Mary and Wilfred. Mrs. Bernadette Agu is godmother to the third daughter of Mary and Wilfred, Irene. I was living with Wilfred and Mary while working at Winchell’s Donut Shop. After lunch, we went to the living room to enjoy dessert and nice conversation. During our conversation Fr. Michael Ojiego Okpala said to me; “young man what do you want to do with your life?” He probably sensed that I didn’t have a future with Winchell’s Donut shop. Without giving the question serious consideration, as if I was waiting for this question, I answered “I want to be a catholic priest.” That question and answer on that Saturday afternoon in June 1989 is what we first celebrated on June 5th 1993 and again today June 9th 2018.

After that historic lunch and with the help of the two couples we came up with a strategy to make that answer a reality. Because none of us knew the process we stumbled one or two times. Eventually we found information about the vocation office for the Archdiocese of Los Angeles. I applied and was interviewed by Fr. Joseph Shea and Sr. Kathy Bryant.  They accepted me in July and in August Mr. Wilfred Ndubuizu and Mr. Chucks Agu drove me to St. John’s Seminary in Camarillo. In August, 1989 I began my journey into the Priesthood.

I spent four years at St. John Seminary. On March 1993 I was ordained a Temporary Deacon at St. Vincent Church in Los Angeles. On June 5th 1993 my answer to Fr. Michael Okpala’s question in 1989 became a reality. I was ordained a catholic priest at the former St. Vibianna Cathedral by Cardinal Roger Michael Mahony.  The mass of Thanksgiving, traditionally called “the first mass,” took place at 8:00 am on June 6, 1993 at my home Parish of St. John Chrysostom Church in Inglewood.

On June 20th, 1993 at 12:00 pm I celebrated the first Igbo mass at St. Anselm Church in Los Angeles with four other Igbo priests. St. Anselm is at the corner of Florence and Van Ness. Less than twenty people attended that mass. However that mass and date is important because it marked the beginning of the Igbo Catholic Community in Los Angeles. I journeyed with that community for another ten years.  Twenty-five years after that first mass at St. Anselm, with less than twenty people, the Igbo Catholic Community is now a full Parish of its’ own with more than 1500 families. It now has a permanent home at St. Eugene’s Parish. This is a great example of how the kingdom of God is like a mustard seed, the smallest seed, once planted, grows into a tree. It is the Lord’s doing. That was also a clear indication that God is behind all that I do in his name. It was God who prompted me to start that community and it is God who made it to grow. To God be the glory and honor and praise.

After my ordination, Cardinal Mahoney assigned me to St. Genevieve’s in Panorama City. The assignment was for four years. My pastor was Msgr. Charles Hill. I met two other fabulous priests at this assignment; Fr. Bruce Correio and the late Fr. Francis Seymour. Because I was newly ordained, I did what priests are expected to do with great zeal and fervor under the supervision of these priests. I met great people at St. Genevieve’s. Accompanying couples who are preparing to get married was a rewarding experience for me.  One of them was the wedding of Monica and Raul Rodriguez. At that time Monica was the field agent for a councilman. As she tried to explain to me what a field agent does, I saw in her a woman with great work ethics and great leadership potential. My suspicion was correct. Today she is a Los Angeles Councilwoman for the 7th district. This is one of the perks of a priest, you hear stories with great potential and with little contribution you become part of that great story.

On June 30th 1997, I finished my assignment with St. Genevieve Parish. I was reassigned to St. Jerome Parish in Westchester.  In this parish I led my first parish pilgrimage to Jerusalem. I also met great and sincere people in this parish. Here I became the Youth minister as well as Parochial Vicar. My Pastor was Fr. Jim Kavanaugh who is now retired. Fortunately or unfortunately I spent only two years in this assignment before moving to the vocation office. I was one of the vocation directors. Here I worked with Fr. Richard Martini, who is the director of the office, Sr. Kathy Bryant who interviewed me when I entered the seminary, and Sr. Karen Collier who is now the Parish life Director of St. Agatha Parish. We were charged with the responsibility of recruiting men for the seminary. I started this ministry on July 1, 1999 and on August 17, 1999 my father went to the Lord. It was very painful.

I left that office in 2003 and went to Cochabamba in Bolivia to study Spanish. I returned to Los Angeles on December of 2003 and was assigned to a Josephite Parish, St. Brigid, in Los Angeles to work with the Central American community. It was an interesting assignment to say the least. I am a Diocesan Priest working in a Religious community Parish. I learned a lot about Religious life, African-American Culture and Central American culture and values.

I spent six months at St. Brigid Parish. On July 1st, 2004 I was assigned as Administrator to St. Bernard Parish in Bellflower. On July 1st, 2006 Cardinal Michael Mahony appointed me the Pastor of the same parish and on November 18, 2006 I was installed as Pastor of St. Bernard Parish by His Excellency, Bishop Alex Salazar. I spent 14 years in St. Bernard which is 56% of my priestly life. You will imagine that I have more story to tell you about my life in St. Bernard. This is not the time for it. It is important to note that I led about four Parish pilgrimages. That brought me closer to the parishioners. We celebrated THANKSGIVING in November in form of Potluck. I celebrated the funerals in St. Bernard and when my mother died I received enormous amount of support from the parishioners. I enjoyed every second I spent in St. Bernard.

What I shared with you is the journey of God in human life. Jesus is the Priest and we are invited to share in his Priesthood. Therefore our yes to his call is a yes to participate in his love for his creation.  In his homily at the 25th Anniversary of the ordination of Fr. Dominic Borg, OCD, Bishop John Michael Sherlock, the former Bishop of London in Ontario, said; “When we come to celebrate the 25th Anniversary of the Ordination of a priest, it is very important for us to remember first of all that a vocation to the priesthood is a gift from God, but it is not primarily a gift to the individual who receives it. It is a gift to the Church, and it is for the welfare of the Church.”  By moving the priest from one assignment to another we come to understand in a clear way that Priesthood is a gift to the church for the welfare of the Church.

I thank God and his Church who have given me the opportunity to contribute to the welfare of the Church. God is love. To know God is to love. To love is to seek unity. You cannot avoid every conflict and disappointment in your life but you can overcome and manage them with love. Love leads us to God. In God we discover ourselves. Father, may everything we do begin with your inspiration and continue with your saving help and through you reach completion. We humbly ask you, that the service we offer to the honor of your majesty may profit us for salvation.  May He who began this great work bring it to completion. Amen.

Click on link below to view highlights of the celebration:

Announcing the arrival of Julius Kelenna Maduka, Son of Adanna and Jonathan Maduka