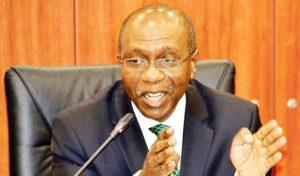 The Central Bank of Nigeria (CBN), yesterday, took over the operations of the Skye Bank due to the bank’s failure to meet its minimum thresholds in critical prudential and adequacy ratios.
Shortly before it announced the dissolution  of the bank’s  board, the chairman, non-executive directors, managing director, his deputy and two longest serving executive directors voluntarily resigned their appointments, CBN said.

The CBN Governor, Godwin Emefiele, who announced the dissolution of the board, yesterday in Lagos, disclosed that Skye Bank’s liquidity and non-performing loan ratios have been below and above the required thresholds, respectively, for quite a while, culminating in the bank’s permanent presence at the CBN Lending Window.
The CBN announced the selection of Alhaji Muhammad K. Ahmad as the new chairman while Mr Adetokunbo Abiru was appointed the new Managing Director.
“The more recent executive directors will be allowed to remain to ensure continuity and a smooth transition,” it said.
Despite the takeover, the apex bank said that the Skye Bank was not in distress and remained a healthy bank.
Emefiele said CBN took the decision to prevent a total collapse of the financial institution, adding that the “Skye Bank should be doing much better than it is right now, we have seen about the opposite in reality,”he said.
The bank is thought to have an estimated non-performing loan portfolio of N700bn, much of which was due to an overexposure in the oil and gas sector.
The bank, about a year ago, acquired 100 per cent stakes of Mainstreet Bank from the Asset Management Company of Nigeria (AMCON) but it was yet to release its 2015 financial year report.
The CBN boss said that the Skye Bank has been given enough time to set its operations right before taking over its management.
Mr Ahmad has about 35 years experience and was the pioneer director-general of the National Pension Commission.
Mr Abiru, a Harvard Business School graduate, has about 26 years banking career experience and was an executive director, corporate banking, between 2013 and 2016.
Meanwhile, a group under the auspices of Iduwin Volunteers Force (IVF), has asked President Muhammadu Buhari to sack the Mr Emefiele over an attempt to ‎‘wind up’ operations of Skye Bank Plc‎ and some other banks.
Speaking, the ‎IVF leader, “Commander” Johnson Bib‎oye, yesterday, said that the CBN’s take over the banks was “an anti-people” policy.
Recall that the CBN had in a letter dated January 22, 2016, signed by its Director of Banking Supervision, Benjamin Fakunle, asked the banks to bring 10 per cent of their paid-up capital per director before December 31, 2016.
‎The group in reference to the letter asked the president to prevail on the CBN to withdraw the directive, wondering how six months before the expiration of the order the CBN decided to sack the management of Skye Bank.