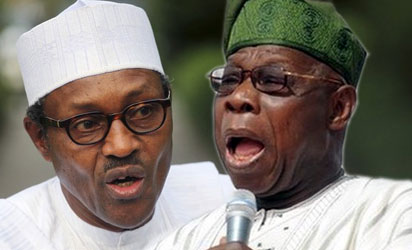 Even before former President Olusegun Obasanjo released his now most famous letter I had my misgivings about how history would treat the government of Muhammadu Buhari. I once raised the issue with a senior colleague whom I know had similar fears about the trajectory of this government and he dismissed it in the following words: ‘I guess if the President goes on like this he might end up getting the Winston Churchill treatment’. I knew exactly what he was talking about. Winston Churchill was the 2nd World War hero who led Britain through some of their darkest hours to victory, but ended up defeated in the very first election after the war.

Readers might recall that at the beginning of the 2nd World War Britain along with its allies were having a very hard time warding off Nazi Germany from annexing other countries in Europe. By 1940 a year after the war started, due to the weaknesses of the allied forces and the overwhelming strength of the German Army, Germany had overrun Austria, Poland and Czechoslovakia, Norway among others and was next door in France. The British Government of Prime Minister Neville Chamberlain had collapsed under the weight of these reverses.

Winston Churchill then a Conservative Party member representing Epping constituency was selected to replace Chamberlain to form a government of national unity with a view to galvanising the British populace to win the war. Most military historians would agree that probably besides Hitler, the most prominent name that came out of the 2nd World War would be Churchill’s. He was reputed to have availed the British a focussed and strong leadership at home and was able to link up with those countries who were suffering the same predicament, United States, Soviet Union, China and others to form a strong alliance which they used to finally subdue Germany in 1945.

As soon as the war was over the British went to the polls which most pundits at the time expected the Conservative Party under Churchill’s leadership to win hands down. Surprisingly the Labour Party won and with a handsome majority. A bitter Churchill left No 10 Downing Street to take his seat as Opposition Leader. He was not to return to that famous street as Prime Minister till 1951 when the Conservative Party won the majority at the polls again. His was a classic case of a leader who won the war and went to the polls with the expectations of gratitude from the citizens but was repaid with rejection.

My senior colleague was recalling the Churchill episode as a pointer to what could happen in 2019 if the President believes that by winning the Boko Haram war he had the Nigerian electorate eating from his hands. May be nobody in his palace court had the temerity to spell it out to him and it needed former President Obasanjo who had perennially done such yeoman job to do it again. Over the years Obasanjo capitalizing on his role as a former Head of State had developed the habit of never turning a blind eye to iniquities of government and would come out openly to castigate the government of the day when the need arose.

His criticism was always timely, calculated, well delivered and would always sync with public opinion. It could be by way of a lecture, a radio or television interview, or the most devastating of all, a public letter. These criticisms in most cases had immediate effect on the regime, leading to military coups or electoral failures. Obviously Obasanjo had seemed to enjoy these controversies. He had always primed himself as an Ombudsman, an Oracle and most of all a Watchman.

As he stated in his memoirs, My Watch, his intentions were always for the national good: ‘A watchman cannot be quiescent under conditions of danger to his watch, comrades and the fatherland. He must raise alarm for all to hear and rise up to action to avert danger. If the watchman has done his duty and the people fail to rise to ward off the danger, the responsibility then lies not with the watchman but the people’. For effects Obasanjo added, ‘If any calamity befalls the nation while one is still alive and can make a difference but chooses not to, one wittingly or unwittingly becomes an accomplice in bringing about the disaster’.

He started early with the administration of Shehu Shagari – the very administration he had handed over power to in 1979. Barely a few days into the second term of Shehu Shagari’s government, Obasanjo descended on them with devastating criticisms on how they were mishandling the economy. The price of oil had dipped in earlier months of the year 1983 bringing a lot of hardship to the generality of the people. Riding on that negative public opinion Obasanjo also accused Shehu Shagari’s government of wanton corruption. President Shehu Shagari was perplexed at the public criticism by someone whom he thought had access to him. In his memoirs, Beckoned to Service, Shehu Shagari recalled that only a few days before Obasanjo’s public outbursts he had the opportunity to discuss a number of national issues with General Yakubu Gowon who had paid him a visit at the State House, Ribadu Road.

In fact, by 30th December 1983, disturbed at the implications of Obasanjo’s withering putdown of his administration Shehu Shagari had arranged to reach out to Obasanjo. That day he was on his way out of Lagos travelling to Abuja for a short rest. He wrote in the book, ‘ I called Shehu Musa (the SGF) and asked him to travel to Ota (Obasanjo’s farm and home) the following morning in order to see General Obasanjo and find out why he has been making embarrassing statements against the administration. I urged him to explore the possibility of my meeting the General as soon as I returned to Lagos’. Shehu Shagari never returned to Lagos as president because his government was overthrown the next day by soldiers who installed General Muhammadu Buhari in the State House.

Probably buoyed by this success Obasanjo never spared subsequent administrations and continued his public criticism whenever he perceived that things were going awry. He criticized Buhari military administration and the one that replaced it run by General Ibrahim Babangida. Obasanjo’s penchant for publicly running down governments of the day was finally checked by an intolerant General Sani Abacha who sent him to jail on charges of attempted coup. It was only providence that saved him when he was released by General Abdulsalami Abubakar, the replacement for General Sani Abacha who died suddenly. Obasanjo became a politician, run for office and became Nigeria’s President for two terms.

After his terms of office Obasanjo resumed his public letter writing to his successors. President Umaru Musa Yar’Adua who took over from Obasanjo was unfortunately a sick man. Despite this, it did not stop Obasanjo from haranguing him with lectures on how to run the government. President Jonathan who completed their first term after the death of Yar’Adua, and on his merit won a second term, was initially tolerant of Obasanjo’s put-me-downs until when Obasanjo overstretched the limits in 2014 by asking him not to run for another term of office. Jonathan was beside himself with anger when he replied, ‘it appears that your letter was designed to incite Nigerians from other geographical zones against me and also calculated to promote ethnic disharmony. Worse still your letter was designed to instigate members of our party, the PDP, against me’. The rest is, of course, history. Obasanjo tore his party card, actively opposed Jonathan and campaigned for Buhari to emerge as president.

Less than three years into the life of the Buhari administration, Obasanjo has posted the usual missive from his Ota Observatory. But what has gone amiss this time? Is it that old habits die hard? Or is Obasanjo truly riding on the crest of public disenchantment? Keep a date with this page as we try to find answers.