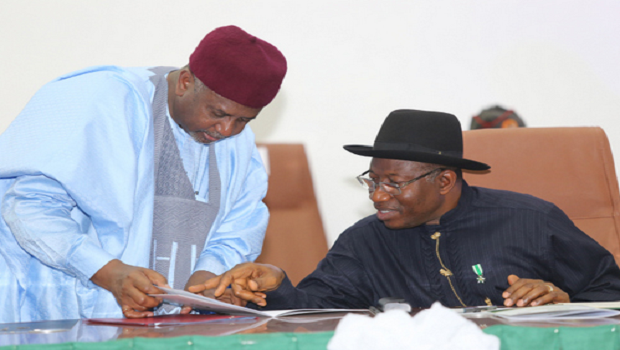 Justice Okon Abang of the Federal High Court in Abuja has stuck out the motion former President Goodluck Jonathan filed to quash the subpoena that was issued to compel him to appear as a witness in his ongoing trial of erstwhile National Publicity Secretary of the Peoples Democratic Party, PDP, Chief Olisa Metuh.

Justice Abang equally refused Jonathan’s alternative prayer for Metuh to be ordered to deposit with the court, the sum of N1billion in line with provisions of Section 241(2) of the Administration of Criminal Justice Act, 2015, before he would mount the witness box.

Jonathan said the N1bn would cover travelling expenses for himself and his security personnel from his home town, Otuoke in Bayelsa State, to Abuja and also for time that he might spend appearing before the court as President of Nigeria between 2010 to 2015.

The ex-President said he got to know about the summon the court issued against him on October 23, through newspaper publications.

However, in his ruling, Justice Abang held that Jonathan’s application lacked merit.

Besised, the Judge said he could not validly exercise jurisdiction to grant any of the former President’s prayers since the bailiff of the court had yet to serve him with a copy of the subpoena.

“Dr. Jonathan, with greatest respect to him, cannot rely on Newspaper publications or news item from electronic media to come to conclusion that the subpoena is vague. It is a heresay evidence which is not relevant before this court.

“His contentiom about invasion of his right to privacy can only be considered when he is in court and in the witness box. If he is asked a question, the court can determine if it is an invasion of his privacy or not”.

Justice Abang said he would have outrightly Dismissed Jonathan’s application since it was argued on its merit but rather chose to strike it out.

In another ruling, Justice Abang dismissed the motion the former National Security Adviser, Col. Sambo Dasuki filed for further hearing to be suspended in Metuh’s trial pending determination of appeal he filed to quash witness subpoena that was also issued against him by the court.

Justice Abang ordered Dasuki who is presently in court to immediately mount the witness box.