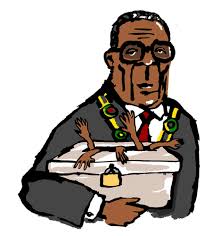 Without a doubt, Zimbabwean president, Robert Mugabe, has been one of Africa’s most prominent leaders over the past few decades.

This is unsurprising because the 93-year-old has been at the helm of affairs of the country for 37 years ever since it attained independence in 1980.

Events over the past few days appear to indicate that his empire might be about to finally crumble after the military took control in what has been dubbed a silent coup.

While Mugabe’s longevity as the head of Zimbabwe has been attributed to the iron fist with which he ruled the southern African country, some will say it is the power in his words.

Over his 37-year reign, Mugabe has racked up a catalogue of remarks that range from controversial to comical.

Here are some of the best:

While speaking on the state radio for his 88th birthday, Mugabe bragged that, based on statistics, he might be better than Jesus Christ.

He said, “I have died many times – that’s where I have beaten Christ. Christ died once and resurrected once.”

Mugabe never made secret of his animousity towards several presidents of the United States of America (USA), and former President Barack Obama was not an exception.

During a radio interview in 2015, in response to Obama’s endorsement of homosexual unions, Mugabe said, “I’ve just concluded – since President Obama endorses same-sex marriage, advocates homosexual people, and enjoys an attractive countenance – thus if it becomes necessary, I shall travel to Washington, DC, get down on my knee, and ask his hand.”

3. Homosexuals worse than dogs and pigs

During that same radio interview, Mugabe remarked that homosexuals were worse than animals.

He said, “We need continuity in our race, and that comes from the woman, and no to homosexuality. John and John, no; Maria and Maria, no. They are worse than dogs and pigs. I keep pigs and the male pig knows the female one.”

In keeping with his tradition of barbs at US presidents, Mugabe saved some choice words for Donald Trump at the 2017 United Nations General Assembly.

He said, “Some of us were embarrassed, if not frightened, by what appeared to be the return of the biblical giant gold Goliath. Are we having a return of Goliath to our midst, who threatens the extinction of other countries?”

While speaking at the state funeral of a cabinet minister in 2003, Mugabe responded to criticisms about his government style, saying he had no problem with being compared to Adolf Hitler because he stands for the same things as the Nazi leader.

He said, “I am still the Hitler of the time. This Hitler has only one objective: justice for his people, sovereignty for his people, recognition of the independence of his people and their rights over their resources. If that is Hitler, then let me be Hitler tenfold. Ten times, that is what we stand for.”

In words that now ring false in light of recent events, Mugabe denied in 2016 that he was grooming a successor to his seat, even though *cough* Grace Mugabe *cough* that’s most possibly what caused his present predicament.

During the TV interview, he said, “Grooming a successor, is it an inheritance? In a democratic party, you don’t want leaders appointed that way. They have to be appointed properly by the people.”

For 37 years, Mugabe rode on the wave of what he believed was an unchanging public love and adoration that meant he could rule the country forever.

While speaking at an election rally in 2008, he said only one person was capable of removing him as president, and it was not the opposition party, Movement for Democratic Change.

Considering what’s currently happening in Zimbabwe, maybe God is ready to do just that.