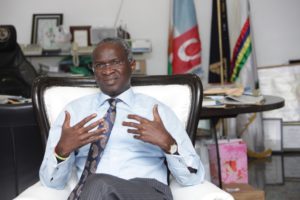 Minister of Power, Works and Housing, Babatunde Fashola, has warned Nigerians to be careful what they say about his promise of better power supply during his emergence as Minister.

He denied making promises of better power supply, stating that it’s unlike him to make promises on things he has no control over.

Speaking with Channels television, the Minister said “Let us be careful when you claim that I made promises because I am ever so conscious of the things that I say and I believe that if I recollect correctly, it was when I was unveiling my ministries, probably sometime late December last year.

“It is unlike me to make promises on things I don’t control. If you check the words I used, I shared with you our plans if it worked and where we will be.”

He further noted that his plans did not consider vandalization of pipelines because he was always focused on power generation.

“There is no nation in the world that wants electricity that vandalizes the assets that produce electricity; it doesn’t make any sense.

“I can control what my team does, I can promise you what my team efforts will produce but I can’t control behaviour that is counterproductive. Those pipelines are national assets; they were built with our common wealth, the people whose territories it passes are custodians of it.

“Let us assume that the people who are also custodians of Jebba, Kainji and Shiroro dams go to break them down because they are angry, then who gets power?” Fashola quizzed.