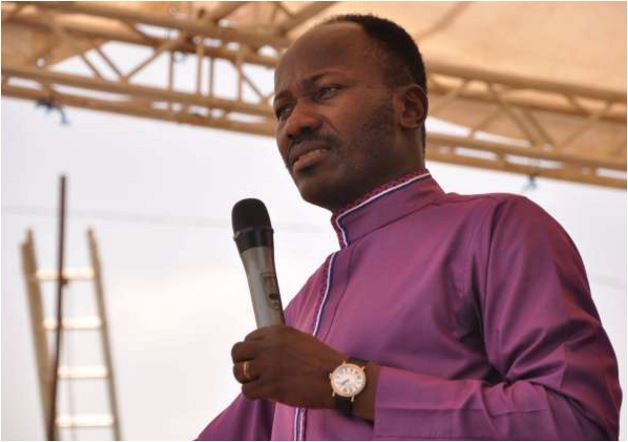 Apostle Johnson Suleiman of the Omega Fire Ministries, has fallen out with his dad, Hon Imuodu Sule over President Muhammadu Buhari and the governing APC.

Sule is also the current APC leader in Auchi as well as the  APC Deputy Leader, Etsako West in Edo State.

His son, Apostle Suleiman often criticizes the APC and President Buhari from the pulpit and that’s something that hasn’t gone down well with Hon Sule.

Why Hon Sule is publicly speaking out

In a recent media chat with select journalists in Lagos, Sule disclosed why he’s finally coming out publicly to give his son a final warning against the backdrop of his persistent and unrelenting criticism of the President Buhari led APC.

Acknowledging and openly confessing his passionate love for his son, Hon. Sule categorically stated that he will no longer condone anyone who undermines the anti corruption crusade of President Buhari. “This is a man I love, respect and hold in high esteem for being a person of integrity over the years”, Sule said.

He added that “each time I hear people criticize my party, the (APC), my heart bleeds. Apostle Johnson Suleiman who’s my biological son and a renowned preacher of the gospel, is seemingly becoming a consistent critic of the ruling party lately.

“And I am seriously concerned about it as numerous well wishers are now urging me to call my son to order.

“I hereby speak out to let Nigerians know that I have warned my son (Apostle Johnson Suleiman) to immediately leave politics for politicians and focus on his calling as a priest.

“Being a retired army officer, President Buhari is my commander in chief and the overall leader of my party, the APC. Hence, I will do anything in my capacity as a stakeholder to support Mr. President for his noble repositioning of our dear country Nigeria.

“Consequently, anybody who is not supporting the administration of President Muhammadu Buhari is an enemy of the nation.”

Sule said he decided to publicly speak out this time because his son had travelled abroad for his routine missionary work.

He added that he just wants to let Nigerians and indeed the entire world know that his son has defied all their privately held discussions as father and son on the subject matter over time.

Hon. Sule Imoudu also wondered why his son who is a philanthropist and clergy would be seen dabbling into politics every now and again.

In January of 2017, Apostle Suleiman was a guest of the Department of State Security (DSS) for inciting and inflammatory comments against the state.

Apostle Suleiman honored the DSS invitation on Monday, January 30, 2017 when he showed up at the agency’s headquarters in Abuja.

The pastor was invited for questioning over his comments on the marauding Fulani herdsmen who have been accused of a spate of killings across Nigeria. He was released soon after.