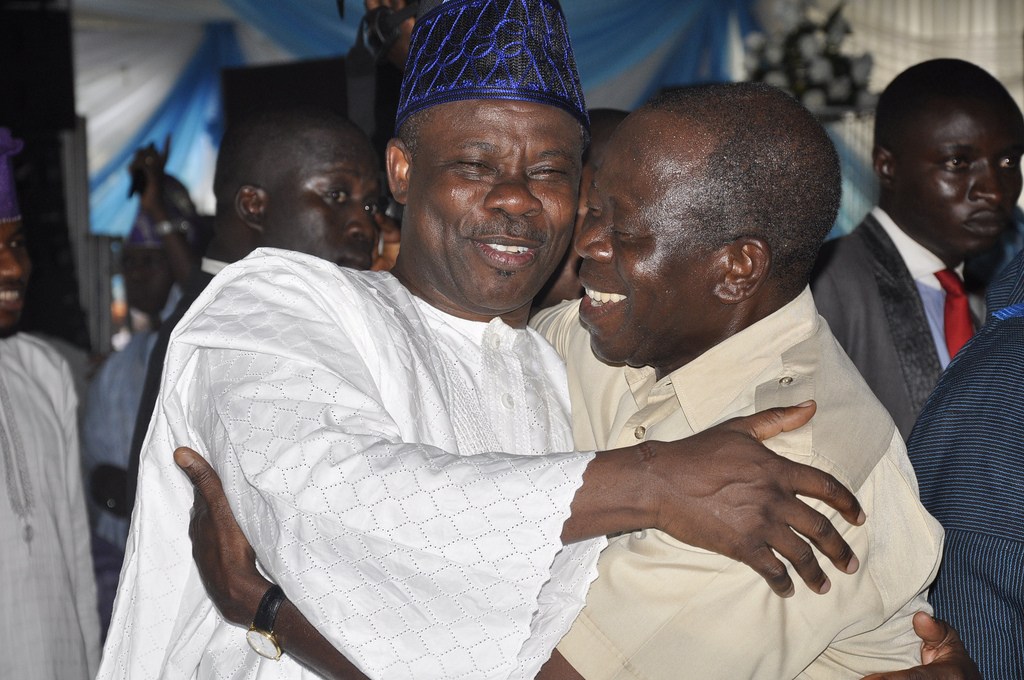 Amidst the crisis trailing the primaries of the All Progressives Congress (APC) in some states, the Ogun State Governor, Ibikunle Amosun, has told the national chairman of the party, Adams Oshiomhole, he is not being asked to sell his conscience but to abide by the rules of the party.

He was reacting to a statement by Mr Oshiomhole after a closed-door meeting with President Muhammadu Buhari on Wednesday in Abuja that he will not mortgage his conscience to keep his job.

The APC chairman made the statement while dismissing rumours some governors were mobilising to unseat him over the outcome of the party’s primaries.

Speaking for Mr Amosun in a statement he issued Thursday evening, Dayo Adeneye, the Commissioner‎ for Information and Strategy in Ogun State, insisted Mr Oshiomhole “fell short of all standards of justice and fairness.”

“We state without any fear of equivocation that no one, at least not on the side of Senator Amosun, has requested or expected Oshiomhole to sell his conscience.

“The least we expect of him is to abide by the rules and guidelines of the APC. Oshiomhole knows, as we know, that in the instance of the last primaries in Ogun State, he has fallen short of the minimum standards of justice, equity and fairness.”

Mr Amosun’s stance differs from that of a national leader of the party, Bola Tinubu, who on Wednesday also said the chairman has not broken any law or guilty of anti-party activities.

The Ogun governor is dissatisfied with the primaries of the party in his state which produced Dapo Abiodun, in place of his anointed candidate, Adekunle Akinlade.

Before the primaries, the party in the state was divided over what mode of primaries to be adopted as Mr Akinlade was initially announced as the consensus governorship candidate by the governor-led faction of the party.

Mr Amosun’s anointed candidate, Mr Akinlade, was declared a winner of the governorship primary election but the results were not signed by the chairman of the electoral committee and none of the agents of the five other gubernatorial aspirants.

Following this, another election was conducted by the NWC which now produced Mr Abiodun. But the governor has insisted that other exercise did not hold.

“Oshiomhole knows that there were no other gubernatorial primaries in Ogun State other than the one that produced Adekunle Akinlade as a candidate. He knows that the primaries into national and legislative offices were won hundred per cent by those declared winner by the panel he sent to Ogun State to oversee the exercise,” Mr Adeneye stated in his statement on Thursday.

“He knows that the shenanigan of unknown court injunctions, unknown appeal panels and all sorts unleashed on the process by him and his cohorts are premeditated schemes executed to deny the members of the APC their true choice of candidates in the elections.”

He said the governor’s “consolation lies in the fact that in the fullness of time, what remains unknown to the public will become bare and everyone will see
Oshiomhole and his co-travellers for who they are.”

Mr Adeneye, however, assured of the governor’s “full commitment to the reelection of President Buhari, stressing, “the issue with the primaries won’t change that.

“In his conduct, Oshiomhole has exhibited disdain for the interest of the APC and that of the National Leader of the party, President Muhammadu Buhari. Senator Amosun remains committed to his convictions about President Buhari and nothing in the shenanigan of the primaries will change that.”

APC National Chairman, Adams Oshiomole Photo: DailyPost
Addressing the chairman’s claim that only three out of the 23 APC governors are not pleased with the outcome of the primaries in their states, Mr Adeneye said justice is not dependent on a number of whom it was denied.

“Finally, Oshiomhole’s claim that only three state governors are aggrieved about the conduct of the primaries flies in the face of the nation-wide outcry that remains loud, trailing the exercise several weeks after.

“We remind him that in any case, justice is not dependent on the number of whom it has been denied. Injustice to one is an injustice to all.”

He said the overwhelming majority of members of the APC in Ogun State remain unshaken in their rejection of the “gangsterism” that has been visited on them in the conduct of the primaries.

“Resolved that the attempt to hand over their state and their patrimony to a rapacious gang of expansionists in the South West will be resisted, not only by members of the APC but by the entire people of Ogun State who are too enlightened to tolerate such abomination.”