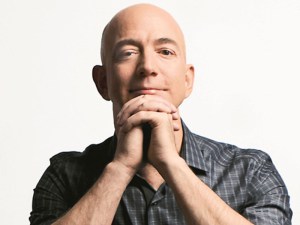 A surge in Amazon.com Incorporated’s shares thursday ahead of the online retailer’s earnings report briefly propelled its founder, Jeff Bezos, past Bill Gates as the world’s richest person.

According to Bloomberg, shares of the online retailer traded at $1,055.37 at 2:17p.m. in New York, after climbing as high as $1,083.31, which gave Bezos a net worth of $92.3 billion. Gates had a net worth of $90.8 billion as of the Wednesday close. In afternoon trading, Bezos was ranked second on the Bloomberg Billionaires Index, behind the Microsoft Corp. co-founder. Gates, 61, has held the top spot since May 2013.

Investors and analysts, in addition to watching Amazon’s progress in taking market share in categories such as apparel and groceries, woud be scrutinising how many new subscriptions the retailer sold for its $99-a-year Amazon Prime service, which offers delivery discounts and video and music streaming. Prime shoppers spend more than customers who don’t have a membership.

“Amazon Prime is why so much physical retail is going away,” said Michael Pachter, a Wedbush Securities Incorporated analyst who has a buy rating on the stock and a price target of $1,250.

“Anyone who joins Prime shops in retail stores 10 percent less, and that number will keep accelerating as Amazon adds more inventory.”

Amazon is expected to post quarterly revenue of $37.2 billion, a 22 percent jump from a year earlier, according to the average estimate of 34 analysts surveyed by Bloomberg, and earnings per share of $1.42.

Bezos, 53, owns about 17 percent of Seattle-based Amazon, which has surged 40 percent this year through Wednesday, helping to add $24.5 billion to his net worth. He started 2017 as the world’s fourth-wealthiest person and has since surpassed Warren Buffett and Inditex SA founder Amancio Ortega, 81, who ranks third with $82.7 billion.