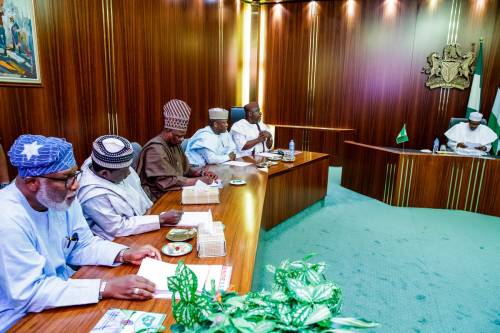 President Muhammadu Buhari Wednesday continued his fire-fighting in the ruling All Progressives Congress (APC), appealing, once again, to aggrieved members, who lost out during the recently concluded primary elections not to leave the party.

At least four governors of the party, Senator Ibikunle Amosun (Ogun State), Chief Rochas Okorocha (Imo State), Alhaji Abdulaziz Yari (Zamfara State) and Chief Rotimi Akeredolu (Ondo State), and scores of senior members have been up in arms against the National Chairman, Mr. Adams Oshiomhole, calling for his removal over the primaries.

The presidential appeal came three weeks after he asked those who failed in their bid to secure the party’s ticket to emulate the Governor of Lagos State, Mr. Akinwunmi Ambode, who lost his re-election bid but did not leave the ruling party.

Buhari pleaded with the aggrieved during a dinner with them at the Presidential Villa on Tuesday night, telling them he did his best to ensure that the primaries process was free and fair.

Those in attendance included gubernatorial, national and state assembly aspirants who failed to secure the party’s tickets in the forthcoming general election.

Buhari urged them to be patient, remain with the party and work for its success during the 2019 elections.

While briefing State House correspondents after the dinner, Alhaji Aliyu Wadada, a gubernatorial aspirant from Nasarawa State, said the president assured the aspirants that justice would be done as their cases would be looked into.

“Beyond just eating at the dinner as a family, we had discussions over the various experiences that aspirants had during the APC primaries and the president pleaded and pacified the aggrieved aspirants to remain resolute and continue to be loyal and committed to Nigeria’s unity which is the most important thing beyond party politics,” he said.

He added, “The president told us his experiences from the military to civilian eras, adding that naturally it is never easy when your mandate is forcefully taken but whatever it is, we should remain as a family and the needful shall be done where necessary to ensure that those that genuinely won their primary elections are given their stolen mandate but cases that cannot be really proven will have to bear with the outcome; after all, you don’t just divorce yourself from your family because you don’t get what you want.”

A senatorial aspirant from Kebbi State, Sule Sami, said those at the meeting resolved to work hard for Buhari’s re-election in 2019.

The Senior Special Assistant to the President on National Assembly Matters, Ita Enang, also said the meeting went well, adding that the aspirants pledged to work for the success of the party.

Enang said the meeting was one of the greatest steps taken by Buhari and the APC to bring every aggrieved person together, thus paving way for the party’s success at the polls next year.

The president had told his guests that he regularly met and called the Oshiomhole during the primaries to ensure that internal democracy was respected.

Buhari, according to a statement by his Special Adviser on Media and Publicity, Mr. Femi Adesina, told the aspirants that the primary motivation for election contest should be the desire to improve situations in the country, and not for pecuniary reasons.

It also said the president urged the aspirants who lost out in the primaries to remain faithful to the country and uphold the tenets of integrity, pleading that there would yet be more opportunities for them to serve along the way.

Adesina also said Buhari, who told the aspirants that “those who mismanaged the resources of the country are still very much around, with incredible wealth,” warned them to be vigilant and circumspect in making choices, adding that the future would only be salvaged by those who love the country.