Today on our list, we will be looking at ten celebrities who secretly got married. 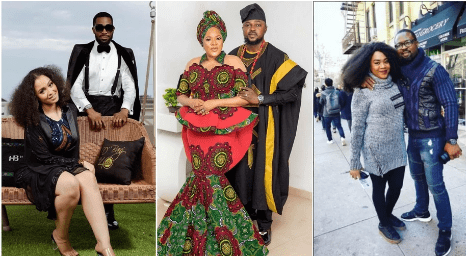 Weddings in Nigeria are typically known to be lavish or for a better word, extravagant.

Now, imagine and pomp and pageantry that follows when a celebrity decides to tie the knot with their heartthrob. Social media and the Internet are left in a frenzy with photos and videos from those weddings.

However, some of your favourite celebrities have strangely gone the other route with private weddings. In some cases, fans are left clueless about the marital status of these celebrities for years.

Today on our list, we will be looking at 10 celebrities who secretly got married.

Dapo Daniel Oyebanjo popularly known as D’banj remains one of the biggest music stars to come from this part of the world. At the prime of his career, the music star was romantically linked to several celebrities including Genevieve Nnaji.

While many were still guessing who the frisky music star was going to get married to, he already had a secret wedding in 2016. D’banj’s wedding to Lineo Didi Kilgrow was so private that some people only knew when he welcomed his first child.

Not many child stars have been so lucky as Regina Daniels. She has had a very successful career almost all her life. When rumours started making the rounds in 2018 that she was dating billionaire businessman, Ned Nwoko, many were left with shock because of the age disparity.

In 2019, the two had their traditional wedding which was attended by very close family and friends. Even the media were left out as photos from the wedding only started trickling in days after.

A lot of people close to the music star may not be shocked about Seun Kuti making this list. But for those who are wondering if the music star is even married, the answer is yes.

Even though Seun has always kept his private life from the prying eyes of the media, he is married to Yetunde George Ademiluyi. Seun and Yetunde have a daughter together. In 2020, they celebrated 15 years of friendship.

One of the most flamboyant and stylish celebrities in Nigeria is Toke Makinwa. She exudes elegance whenever she shows up at an event or releases photos on social media. So many would wonder why she opted for a secret wedding.

The media girl and her ex-husband, Maje Ayida tied the knot in 2014 in a very private ceremony which was attended by close friends and family. It was so private that Toke was the one who announced the marriage to the public on her Instagram page with pictures from the private ceremony.

For those who don’t know, Funke Akindele has been married twice. Her first wedding to popular Oshodi based businessman, Adeola Kehinde Oloyede was the talk of the town.

Maybe that was the reason when found love the second time with music star JJC Skillz, she decided to keep it a secret. They have a set of twins.

The movie star tied the knot with her hubby, Rudolph Williams in the 1990s. A lot of people weren’t even aware that the movie star had gotten married.

She moved to the United States of America with her hubby where she is now a practising nurse. They have three (One from her previous relationship) children together.

Just like some other celebrities on this list, Toyin Abraham has had her fair share of marriages gone wrong. The movie star got married to Adeniyi Johnson in 2014 and it remains one of the messiest celebrity weddings in the entertainment world.

Abraham didn’t give up on love as she hopelessly fell in love with actor Kolawole Ajeyemi. Their wedding remains a mystery as nobody to date knows when the movie star officially said ‘I do’ to her husband.

When Simi became a star, her relationship with music star, Adekunle Gold made it easier for her to win more fans. These fans couldn’t wait to see them together and most importantly, get married.

Well, Simi and Adekunle Gold tied the knot in 2019. However, it was a surprise on many as the wedding date and location were kept away from the public. The wedding was so private that photos from the wedding surfaced in 2021, two years after.

After Agbani Darego was crowned Miss World in 2001, all eyes were on whoever was going to sweep the beauty queen off her feet.

Well in 2017, the beauty queen left many stunned as she shared photos from the private wedding ceremony to Ishaya Danjuma which was held far away in Greece.

It is no news that Stella Damasus has been married thrice. Her first marriage to Jaiye Aboderin in 1999 was short-lived as he passed away in 2004.

In 2007, Damasus remarried, this time, to Emeka Nzeribe. Now, this was one of the shortest celebrity marriages ever as it only lasted for 7 months.

Her last marriage to movie producer and director, Daniel Ademinokan was kept away from the prying eyes of the public. They only came out as a married couple in 2014.