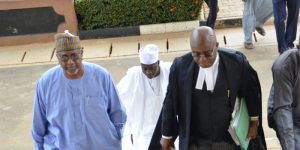 The Supreme Court on Friday threw out an appeal brought by the former National Security Adviser (NSA) Col. Sambo Dasuki over his continued detention by the Federal government, for lacking merit.

While holding that Dasuki’s appeal constituted an abuse of court process, the apex court unanimously pronounced that his continuous detention was not at the instance of the Economic and Financial Crimes Commission (EFCC) that put him on trial.

Justice Ejembi Eko, who delivered the judgment, held that the bails granted Dasuki in respect of criminal charges brought against him by EFCC have been obeyed, having been implemented by the Comptroller of Prisons in Kuje on December 29, 2015.

Dasuki had on June 15, 2016, at the Abuja division of the Court of Appeal, lost his bid to enforce his freedom after securing bails on all the charges against him.

The former national security adviser under the Jonathan administration had approached the Supreme Court to challenge his continued detention and also prayed for the suspension of his trial pending the time bail orders were obeyed by government.

But in his judgment, Justice Ejembi Eko said that the EFCC cannot be held responsible for Dasuki’s continued detention since the detention was carried out by the Department State Service (DSS).

Judge Eko held that since the bail order was implemented by the Prison Comptroller it has been obeyed as far as the charges against him at the FCT High Court was concerned.

The Court said that from the claims and counter-claims of Dasuki and EFCC, it was clear that he (Dasuki) was rearrested at the premises of the Kuje Prison on December 29, 2015, by the DSS.

The Supreme Court affirmed the decision of the Court of Appeal and the FCT High Court which had, in separate decisions, held that the EFCC cannot be held responsible for the detention of Dasuki by the DSS.

Justice Eko said the appeal brought by Dasuki lacked merit and constituted an abuse of court process and therefore dismissed it.

The Court ordered Dasuki and EFCC to go back to the FCT High Court and continue with the trial in the charges brought against him by the anti-graft agency.

While arguing the appeal, Dasuki’s counsel, Joseph Daudu, contended that the decision of the Court of Appeal was erroneous, adding that it was incumbent on the Supreme Court to restore the integrity of all courts.

Daudu submitted that it was out of place for the Court of Appeal to scuttle the fundamental rights of a citizen after well-considered decisions of four courts that admitted the applicant to bail.

The senior lawyer said that his client needed the bail to prepare his defence, adding that he could not have access to security documents while in detention.

“My Lords, Dasuki is already being treated as a convict, even when none of the charges brought against him has been concluded,” Daudu stated.

“We sincerely pray this esteemed court to do the needful by setting aside the decision of the lower court.

“We also pray the court to momentarily halt the applicant’s trial until the Federal Government obeys the bail order of court.”

In opposition, counsel to the EFCC, Mr. Rotimi Jacobs, argued that the appeal lacked merit and should be dismissed.

Jacobs said the bail condition granted Dasuki was perfected on December 29, 2015, adding that a warrant of release to that effect was served on the Comptroller of Prisons in Kuje, upon which he was released. Jacobs said the Federal Government had not violated Dasuki’s rights, adding that the defendant was only re-arrested by the operatives of the DSS over other fraud allegations.

He said that it was unfair for the applicant to consider his re-arrest as a disobedience to court orders on his bail, adding that no court bail was targeted at the DSS when granted.

“The EFCC, which put Dasuki on trial on criminal charges at the FCT High Court, cannot be held responsible for the action of the DSS on the ground that the two agencies are different entities,” said Jacobs.

“Besides, My Lords, the Appeal Court has said there was no existing order against the re-arrest of Dasuki.

“Suffice to say that there cannot be a disobedience to a non-existing court order.

“We pray the apex court to affirm the decision of the lower court which ordered the continuation of the applicant’s trial even while he remains in detention,’’ the prosecutor said.

Dasuki had approached the Supreme Court praying it set aside the decision of the Court of Appeal which exonerated EFCC from his re-arrest shortly after he perfected his bail conditions.