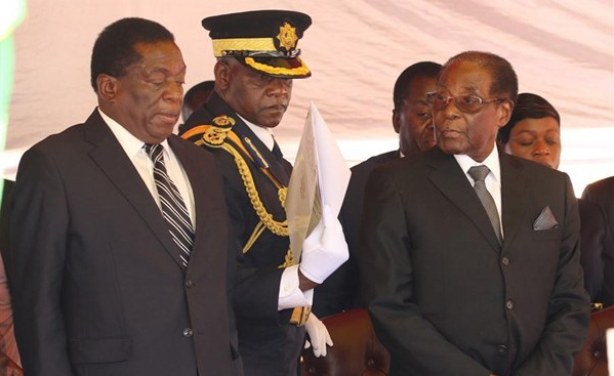 Former president Robert Mugabe yesterday opened up about his ouster last year by the army, disclosing for the first time that some people were allegedly killed and others tortured as the 94-year-old politician piled up pressure on his successor, President Emmerson Mnangagwa.

Mugabe told close relatives and friends at a private birthday party at his Harare mansion, known as Blue Roof, that the army chose to side with Mnangagwa in what was essentially a Zanu PF dispute.

He disclosed that Mnangagwa had called him yesterday requesting that they meet urgently to discuss his situation but the deposed Zanu PF leader vowed to tell it as it is. This will be the first meeting between the two since Mugabe’s ouster.

Before narrating events leading to the dramatic military takeover on November 15 and his life after leaving office, Mugabe asked “the weak” to leave the venue as he was about to give graphic details of the fierce power struggles.

“Those who are afraid please leave. This is an important issue and I will not mince my words,” the former Zanu PF leader said.

He said Mnangagwa wanted to meet him on his return from a state visit to the Democratic Republic of Congo (DRC). It was not immediately clear when the president will leave for the DRC.

“He told me this morning that he was going to the DRC where he has been invited by (President Joseph) Kabila, the son of the late leader Laurent Kabila,” he said.

“He requested for a meeting and said he will bring along other leaders so that we could talk. I said well, you can come. And he said he will do so when he returns from the DRC.”

Mugabe promised not to hold back during the meeting with Mnangagwa, saying the new rulers need to know that the takeover of power with the help of the military was illegal and detrimental to democracy.

“I will tell them the truth that what you did was illegal. You abused the people, beat up people,” he told the crowd that was stunned into silence.

“I know you were told not to talk about this, but I will say it because it is the truth.

“People were injured, some were killed. They came here with bruises; some with their heads injured, and told us that some of them had been killed.

“I will tell them the truth.”

He said Vice-President Constantino Chiwenga, who was the army commander at the time, took sides with Mnangagwa in the Zanu PF factional wars and “rolled out tanks against the people.”

“Because we had a misunderstanding with one of my vice-presidents, Emmerson, the army with Chiwenga decided to take out tanks into the streets. This is not what we fought for,” he charged.

“We did not fight for people to be threatened like what happened, it’s sad.

Mugabe said during the negotiations with the military commanders after they had placed him under house arrest, they claimed that people were on the streets demanding his ouster.

“They said to me people have marched, they want you to go. They said they have filled the stadium demanding that I should go, I said: Which people, MDC people?

“You wear good suits, hence you are protecting Mugabe. Ahh, they don’t know that you don’t need to be educated to be a soldier; normally soldiers are recruited from Grade Seven or Form Two while the intelligence team is recruited from those who are educated.

“It should follow that when one is educated with a degree or ‘A’ Level you should be paid higher than those who are just recruited as long as they can be trained.”

Mugabe said contrary to claims by Mnangagwa that he was being treated with respect, his family was being abused.

“They say Mugabe is a legend. What legend are you talking about when you are busy taking away the vehicles? They say they want to protect my legacy, which legacy are they talking about? Doing the opposite of what we fought for,” he charged.

“The boys and girls who used to work with us have been withdrawn, vehicles being taken from us. “What legacy when they have expelled me from the party?

This girl here, my wife, is no longer a member of Zanu PF, so what legacy are you talking about? Why fear this girl (pointing at Grace)? She is just young, but they took the tanks to fight her,” Mugabe said before breaking into laughter.

“When Mnangagwa called, I addressed him as president and he said no, ‘don’t address me as president, call me by my first name, Emmerson’. I said no you are the president, this is what you are. ‘Isn’t this what you wanted?’  (Laughs). He then pleaded with me and I said ‘anyway, I will call you ED since this is what newspapers call you.'”

He said the new administration was persecuting Grace by charging people linked to the awarding of her alleged fake Doctor of Philosophy (PhD) degree.

“They are busy fighting the degree which we all helped her achieve,” Mugabe said.

“Even if you were to withdraw the degree, does it change anything? She will remain Mai Mugabe. That will not change.”

Mugabe said during the standoff with the military last November, Chiwenga tried to reconcile him with Mnangagwa to no avail.

“Let me give credit to Chiwenga, he tried to have me engage Mnangagwa, but [Mnangagwa] said, ‘the people have spoken’, I am quoting what he said.

“Which people? MDC people? What about those not in Harare? So today the people we must listen to are opposition supporters? What happened to congress?

“They now want to work with me for elections, can they be trusted again? Ohh, can our people trust them again? Can our people vote for such a Zanu PF, a Zanu PF which shredded the constitution? I don’t know.

“What are we going to tell them? Are they going to convince them that this is what we did?

“Speak the truth that people died, that people were intimidated by the gun? I don’t know.”

“We need to apologise and say the truth to them. I don’t know with the time left whether we are able to do that and unite the people. But first things first, they must accept and apologise that what they did was wrong. “It is not what we fought for. Then we can start to talk on the way forward. But I doubt if our people will forgive us. I doubt if they will be trusted again.”

The party, whose theme was “celebrating our hero”, was organised by Mugabe’s family after they spurned an offer from Zanu PF to host the celebrations.

Guests, who included former Cabinet ministers, captains of industry and fired Zanu PF officials, went through thorough searching at the gates of the imposing mansion.

Mugabe ended his address by chanting a slogan “Pamberi nekubatana, pamberi nebirthday, pamberi navaMugabe, pasi nevanoda kuvanetsa [Forward with unity, forward with the birthday, forward with Mugabe, down with those who want to trouble him].”