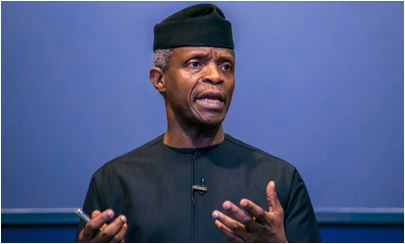 The Vice President, Prof. Yemi Osinbajo, yesterday, blamed government’s inability to deliver on its promises on socio-political inequality, weak justice system, absence of rule of law and lack of state capacity to maintain law and order.

He also expressed frustrations at the inability of anti-graft agencies to secure convictions for the many suspects brought before the courts for corruption due to the manipulative tendencies of the elite class.

Osinbajo spoke as Bishop of the Catholic Diocese of Sokoto, Fr. Bishop Mathew Hassan Kukah, said the problems plaguing the nation’s democracy will not disappear with the removal of President Muhammadu Buhari from office.

The duo made their separate remarks at a public lecture organised by The Kukah Centre in Abuja yesterday, with the theme: “How to make Democracy Work for Africa.”

Osinbajo, who noted that people expected those charged with governance to deliver on their promises, including delivering social goods, ensuring that the growing youth population got jobs, ensuring the rule of law and security, lamented that despite several suspects charged with corruption by anti-graft agencies in the country, convictions are yet to be secured.

According to him, convictions have not been achieved due to the manipulation of suspects who are mainly elites.

Osinbajo said people could be put on trial but the trials could go on forever because the system enables people to employ diverse legal tactics to delay conviction.

Accordingly, he said the elite preferred the status quo which set the lowest bar for political advancement, being “identity politics” of where one comes from or which religion one belongs.

He said the elite follow the path of such division to analyse real development issues, thus diminishing the real issues concerning the people such as good governance, job creation, poverty alleviation, peace and security.

The Vice President said: “That is the Africa story; democracy, yes; election yes. These are issues that remain very prominent everywhere in Africa.

“It is often threatened because we simply have not invested enough in the institutions that make this possible. So, ensuring security, problems of weak policing are some of the issues that we experience.

“The perception of people on the efficiency and fairness of the justice system is affected always by the slow pace of trials and manipulation of the system by those who can afford superior legal representation.

“Many of the ethnic and other parochial tensions that tended to create insecurity and outright conflict, time and time again, are largely on account of failure to deliberately undertake nation-building efforts.

“But the question of the capacity of the state to deliver on its most important role of security, justice and rule of law is often threatened because we have not invested enough in institutions that make it possible,” Osinbajo said.

Buhari’s exit not the solution — Kukah

In his remarks, Bishop Mathew Kukah, said the problems plaguing the nation’s democracy will not disappear with the removal of President Muhammadu Buhari from office.

According to him, establishing a ‘Third Force’ coalition to merely produce a replacement for President Buhari in 2019 will not fix the inefficiencies of government unless the entire political class see power as a trust given to them by the people.

Kukah said: “Since 1999, when we returned to democracy, we had prayerfully hoped that by now, we would have covered a lot of mileage but almost 20 years later, it seems to be quite a bit of tragedy.

“Building a nation is like staying in marriage or pursuing any vocation in life that requires lots and lots of patience and hard work.

“On the issue of 2019 and the third force coalition, I reiterate that if every time you have problem in your marriage, you go ahead to marry a new wife, how many wives will you end up marrying?

“The solution to bad marriage is not a new marriage. I am talking as a Catholic priest. The problem with the APC is that it is a coalition and that is why it is falling apart.

“The major limitation in Nigeria is that the people in power feel it is them against the rest of Nigerians. Democracy has opened up a space, and as such, anybody who holds power holds that power in custody and in trust for the people.

“People’s right across our country are frustrated with democracy; they are frustrated because it has not been able to offer them the hope they had dreamt about. But we still have to convince our people that it is still probable for democracy to work.

“Nations of the world have tried theocracy, which is the government by Priests or Imams and have found those systems wanting. They have tried tyranny, apartheid and so on. At the end, everybody has agreed that democracy is the best system that approximates the tool we require to manage diversity, especially for a country like Nigeria.

“Democracy is not what politicians can offer to us, it is not what the President can give to us, and it is not what governors or senators can do on part time basis. Democracy is a process which each and every one of us imbibe, adopt certain ingredients that regulate our lives.”