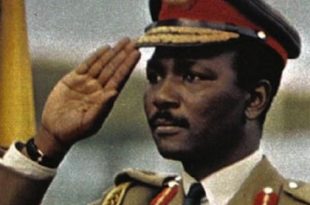 General Yakubu Gowon (retd), former Nigeria’s head of state on Sunday, October 8, called on different ethnic groups agitating for self determination to have a rethink of their actions.

He urged agitators to imbibe the ideals of one young Nigerian who in an article during the Nigerian Civil War, urged fellow citizens to Go On With One Nigeria.

Gowon said this after receiving the 2017 Leadership Award at this year’s Trinity House Honour Nigeria Awards in Lagos for his sterling leadership role in Nigerian and African politics, Vanguard reports.

Gowon who thanked the church and its leadership for the honour in an interview with journalists said:

“I am really humbled and grateful for this honour done to us today. I’m grateful also to know that so many people have been honoured before now, all deserving of the honour that they got. Mine is for leadership. I can assure you that leadership wouldn’t have been possible without that patriotic Nigerian who asked me whether I know the meaning of ‘Gowon.’ I replied him, “it’s my name” and in my local language it means the owner of the masquerade in a gong.

“That young man wrote an article in one of the dailies, and when I read the article that early morning, he gave the meaning of Gowon as ‘Go On With One Nigeria.’ He created an acronym that Goes on with one Nigeria. I can assure you, I was very impressive as I said, so this is what Nigerians want me to do and this is what I was trying to get Nigerians to support me do it.

“But that message made me to be more determined to ensure that Nigeria remains as one for all of us and for the future generations. The honour today, I accept it on behalf of all Nigerians, past, present and also future. This church is about the love of God and the unity of the country.

Speaking on the current agitations for self determination several years after the Nigerian Civil war, he said: “I think I have answered it. You work hard to make sure you convince those who are calling for the break up of Nigeria. Tell them that Nigeria is one. This is what Nigerians told me to do, and this is what I tried to do. And I can achieve that through your help. We should work hard to convince those who want the country to break up. I can assure you there are more people who love Nigeria and would want Nigeria to continue to exist as one nation than those who are trying to create problem for the country.”

Going further, Gowon urged every Nigerian to be honest to God, saying: “If you are honest to God and you love Him the way you should, and also, your neighbour…honestly, if we can practice that, things will begin to work well for us all. I love Nigeria, I believe in Nigeria like many other Nigerians.

“Like that young man that wrote the article, telling me that the meaning of Gowon is Go On with One Nigeria. He sent a message to me and he gave me the courage that I can do it correctly and with the fear of God. That’s the reason why that civi war, we fought with a code of conduct…to be truthful. We ensured that we did not call them anything. We tried not to call the other side enemy and we never called them enemies.

“The worst name I gave them was rebels. But they are our brothers and sisters and we did everything to protect them so that at the end we would be able to live together in peace and that was why I made a statement at the end of the war: No Victor, No Vanquished. That was why we made the reconciliation that we needed in order to build that country again. We Nigerians create the problems for ourselves, and we got to solve the problems by ourselves,” he added.

Meanwhile, NAIJ.com had reported that the former chairman and founder of the All Progressives Grand Alliance (APGA), Chief Chekwas Okorie, said that the late Odumegwu Ojukwu never said that the unity of Nigeria was not negotiable contrary to President Muhammadu Buhari’s statement about his meeting with Ojukwu.

Okorie who is the current national chairman of UPP said that though he did not attend the meeting between the two leaders, he was given a copy of communique upon his return.