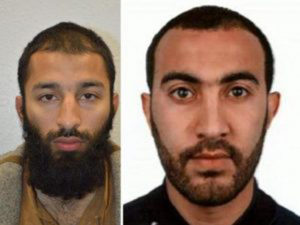 The Met’s Counter Terrorism Command has released the names and photographs of two men shot dead by police following the terrorist attack on London Bridge and Borough Market on Saturday, 3 June.

While formal identification has yet to take place, detectives believe they now know the attackers’ identities. They believe two of the men are Khuram Shazad Butt and Rachid Redouane, both from Barking, east London.

All three men were confronted and shot dead by armed officers within eight minutes of the first call.

Khuram Shazad Butt, 27, (20.4.90), was a British citizen who was born in Pakistan. Rachid Redouane, 30 (31.7.86) had claimed to be Moroccan and Libyan. He also used the name Rachid Elkhdar, with a different date of birth of 31.7.91. Inquiries are ongoing to confirm the identity of their accomplice.

Detectives would like to hear from anyone who has any information about these men that may assist them with the investigation. They are particularly keen to hear about places they may have frequented and their movements in the days and hours before the attack.

At 22.08hrs on Saturday, 3 June, a hired white Renault van travelled north to south on London Bridge and mounted the pavement, which collided with pedestrians before they abandoned the vehicle.

Seven people were killed. Work to inform the next of kin of the victims is ongoing. This is taking time because we believe some of the victims are from abroad. Of the 48 people taken to hospital, 36 are currently being cared for in London hospitals with 18 remaining in a critical condition.

The investigation into this horrific attack is fast moving and complex as we piece together a fuller picture of what occurred. So far officers have arrested 12 people – seven women and five men – and searched six properties (four on Sunday and a further two properties today). One of the arrested men and one of the women were subsequently released.

Counter terrorism partners have dedicated intensive effort to developing and improving our counter terrorism response over recent years, as the threat has changed. The more we know, the greater the chance when an attack does happen we will have some information about at least one perpetrator. Our work necessarily involves making difficult judgements about how to prioritise the resources available to us at a time when the UK is facing a SEVERE and high tempo terrorist threat.

There are 500 current terrorism investigations, involving 3,000 current subjects of interest. A small number of the highest priority investigations involve current attack planning, and these investigations command a significant proportion of our resource. The remainder of our investigations focus on other activities relating to active support or facilitation of terrorism.

Khuram Shazad Butt was known to the police and MI5. However, there was no intelligence to suggest that this attack was being planned and the investigation had been prioritised accordingly. The other named man, Rachid Redouane, was not known.

Work is ongoing to understand more about them, their connections and whether they were assisted or supported by anyone else. We cannot say more about them at this stage.

Assistant Commissioner Mark Rowley said: “I would urge anyone with information about these men, their movements in the days and hours before the attack and the places they frequented to come forward.

“The police and our partners are doing everything we can across the country to help prevent further attacks and protect the public from harm.

“At any one time MI5 and police are conducting around 500 active investigations, involving 3,000 subjects of interest. Additionally, there are around 20,000 individuals who are former subjects of interest, whose risk remains subject to review by MI5 and its partners.

“The security and intelligence services and police have stopped 18 plots since 2013, including five since the Westminster attack two months ago.”

He added: “We would urge the public to be vigilant and to report any suspicious activity to the police by calling us in confidence on 0800 789321 or in an emergency calling 999.”