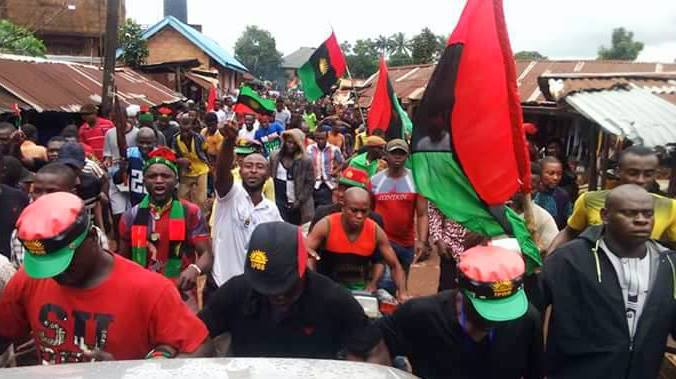 A Catholic cardinal, John Onaiyekan, has criticised the federal government’s declaration of the separatist group, IPOB, as a terrorist organisation.

Mr. Onaiyekan expressed his views in an interview with PREMIUM TIMES.

The Nigerian government had on Wednesday secured a court order, affirming an earlier pronouncement by the Nigerian army that IPOB is a terrorist organisation.

President Muhammadu Buhari had on the same day consented to the declaration, ahead of the ruling by the court.

Explaining the position of the government on the issue, the Information Minister, Lai Mohammed, said the move was the only option available for a responsible government to take to curb the excesses of the group.

Some Nigerians have criticised the move, saying other groups like the Fulani herdsmen whose activities have caused scores of deaths were not labelled terrorists.

In his reaction, Mr. Onaiyekan said although members of IPOB led by its separatist leader, Nnamdi Kanu, had not conducted themselves in a manner worthy of any commendation, the step taken by the government, is “one taken too far.”

“My understanding of a terrorist is a deadly armed activist. I don’t think, merely speaking or talking or threatening will add up to being a terrorist. I believe it is a mistake, it was overdone and I fear that a lot of people outside Nigeria will find it difficult to agree with us in this matter. It will create a bad image for us,” said Mr. Onaiyekan on Thursday.

”The impression it creates is like you give a dog a bad name so as to deal with it. If you want to deal with IPOB, I believe that even the military show-down is a bad approach. Because there is the need to address the grievances of those boys.

“Even though I do not agree with what the boys are doing and the way they are doing it. Nnamdi Kanu’s advisers should have warned him to calm down and not be stupid by thinking that he can confront the Nigerian army. The method he is using will not achieve any objective. Up till now, we have not seen any confrontation since the declaration; and that supports my claim that they are not terrorists.

“If we reduce the courts to a body that just confirms whatever aspirations that government has, then the judiciary will not be seen as independent. The title of terrorists should not just be thrown at anybody. And there is a danger that if we continue this way, it may become more and more difficult for us to arrive at a peaceful solution,” the cleric added.

Mr. Onaiyekan reiterated the call made by the Catholic Bishop’s Conference of Nigeria, CBCN that the activities of the Fulani herdsmen is something that should have attracted such a declaration.
“The Fulani herdsmen who are armed, lethal, murderous, vicious and have been killing people in our communities; they are the ones that we are waiting for, to see what the government will do. If you recall, the Bishops’ conference called on the government to treat them as terrorists,” Mr. Onaiyekan said.

In his reaction to the development, Mike Ozekhome a Senior Advocate of Nigeria, said although the Nigerian government finally complied with the provisions of the law in declaring IPOB a terrorist organisation, the group’s activities are ‘not harmful enough’, to consider it a terror to Nigeria.

“It is no longer news that a few days ago, the Federal Government complied with the provisions of section 2 of the Terrorism Prevention Act, 2011, by obtaining an imprimatur from a Federal High Court in Abuja. It is my humble view, however, that section 2 of the Terrorism Prevention Act, 2011(TPA), cannot be read in isolation,” Mr. Ozekhome said, wondering whether the IPOB group “truly qualifies to be called a terrorist association.

Highlighting various features of terrorism, Mr. Ozekhome further said the provisions of the article 2 (a) on Convention of the Organisation of the Islamic Conference (OIC), as well as the article 3(1) of the OAU Convention on the Prevention and Combating of Terrorism, 1999 allows for any kind of struggle (including armed struggle) for the purpose of self-determination.

The lawyer argued also that the provisions of article 20 of the African Charter on Human and Peoples’ Rights, has been declared by Nigeria’s Supreme Court to be subject only to the 1999 constitution and ”higher than any other law in Nigeria, with regards to the struggle for self-determination.”

However, sharing a contrary opinion, another lawyer, Rotimi Oguneso said the action of the government is legal and warranted ”given the manner of conduct by the IPOB members.”

“My position is that people should stop playing politics with anything or everything in Nigeria. If we persist in this way, we will ruin ourselves. The terrorism act is a piece of extraordinary legislation. The provision is so draconian and it has a reason.

“An unusual sickness must attract an unusual solution. When the security of the nation is at stake, the rights of individuals or bodies will take a backstage. Who does not know that the activities of IPOB have been causing tension in the country?

“Who is a stranger to the fact that the activities of IPOB have caused some jobless northern youths to be issuing releases that the Igbos should leave the north? Do you know the implications of what those incendiary statements have caused in the country? Do you know some people have started packing their loads (relocating), some of them have died in the process of moving from one part of the country to the other?
“Do you know what it is for a body to wake up and start declaring a form of independence and setting up secret service? It’s high time we sit up in Nigeria and face the truth squarely.”

He added that the comparison made to the activities of herdsmen was inane.
“How can somebody just wake up and before you know it, the country is under tension? Yet people are comparing it to Fulani herdsmen. When you are talking about Fulani herdsmen, do you know them? Are they not marauders in the night who go to attack villages? Have you ever seen Fulani herdsmen on YouTube or in any video saying they are going to challenge the country? How can anybody now compare the issue of Fulani herdsmen with IPOB? Let us not compare things that we shouldn’t. The Nigerian army is, regardless of anything, a symbol of authority and strength of the Nigerian nation,” Mr. Oguneso said.

In a similar opinion, a leader from the International Federation of Women Lawyers, FIDA, Abuja Chapter, Ngosi Ikenga, said the Nigeria judiciary ”should not be seen as being intimidated into granting the said application.”

“I know that the Attorney-General went to court and secured a ruling declaring IPOB a terror organisation. For the court to have granted the request, I believe there should be some elements of terrorism that must have been noticed from the activities of IPOB. For example, the display of their flag, in a sovereign nation, that in itself is a treasonable offence.

“If they were agitating the way they had started without bringing criminal elements into their agitation, I am not sure the courts would have granted the government’s request. It’s not for people to just criticise the court. The court usually considers issues surrounding certain circumstances, so if the court has so ruled, then there should be some elements of criminality in what they have done. If you are agitating for a state of your own, you should first be granted what you seek, before you start displaying your flag,” Mrs. Ikenga told PREMIUM TIMES.
IPOB is currently challenging its proscription in court.