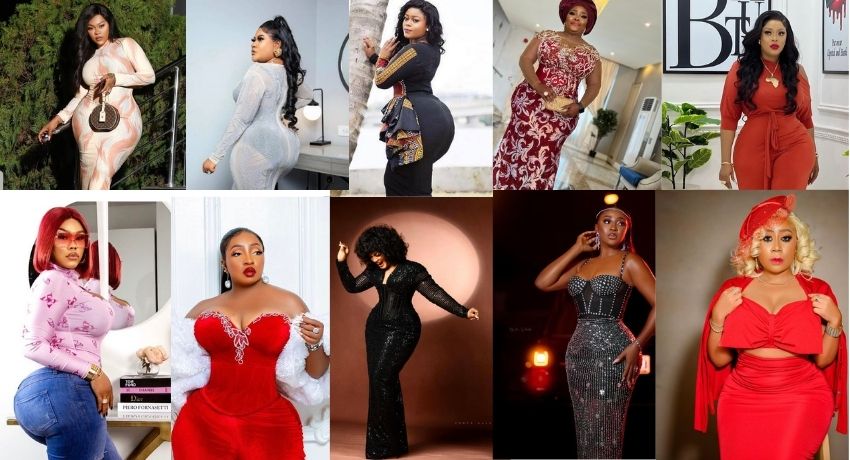 Nigeria is blessed with a lot endowed women all around but our focus is on Nigeria’s film industry, Nollywood. The movie industry overflows with numerous curvy women. Lately, having curves, being overly endowed in the right places and having a flat stomach has become a race a lot of women are running. Some are blessed naturally, some with exercise, while some don’t mind going under the knife just to attain their desired shape and take sultry pictures to ‘pepper’ viewers. Here are the top 10 curvy Nigerian celebrities in Nollywood.

Nkechi Blessing is one of the most popular Nollywood actresses who is known for her curvy backside. People speculated that she had surgery, but she debunked those rumours. Checking some of her old photos shows that she did not have plastic surgery.

The actress has an enormous backside and a curvy shape to attract the attention of her followers. Blessing who is also a musician and brand ambassador is a known face in the Yoruba movie industry.The 32-year old actress is married to an Ekiti politician, Hon Falegan Opeyemi David.

A Musician will shoot another dead — 3 mnts old…

Ronke Odusanya popularly known as Flakky Ididowo or Becky is a popular face in the Yoruba movie Industry. She is naturally endowed in all the right places and carries herself effortlessly. Ronke is an actress, film producer and stage performer.

The 48-year old actress began her professional acting career at 16 years old, after graduation. She got her alias “Flakky Idi Dowo” after her role in Fathia Balogun‘s movie as Folake in 2006. Ronke featured in Oga Bello’s Kerikeri. She made her Nollywood debut feature in 2001 Yoruba film, Baba Ologba. She has featured in several Nigerian films, including Jenifa which she played the role of Becky, Twisted, and A Girl’s Note among others. Ronke was nominated for Best Actress in Leading Role (Yoruba) at the 2017, ‘best of Nollywood awards’ for her role in the film Ailatunse.

Curvaceous brown-skin Ini Edo is another well appreciated actresses in Nollywood, although there have been rumours that she had a plastic surgery to attain the figure Ini definitely knows how to rock with the stunning shape.

Ini Edo began her film career in 2000, and has featured in more than 100 movies since her debut. In 2013, Ini Edo was a judge for the Miss Black Africa UK Pageant. In 2014, she was appointed by the United Nations as a United Nations Habitat Youth Envoy.

Arguably one of Nollywood’s prettiest, Omotola Jalade Ekeinde despite birthing four kids still looks like one in her 30s.

Omotola Jalade Ekeinde MFR is a Nigerian actress, singer, philanthropist and former model. Since her Nollywood film debut in 1995, Omotola has appeared in over 300 films, selling millions of video copies. She got married to Captain Matthew Ekeinde when she was 18 years old.

Her real name is Chidinma Agunobi, but she is widely known as Princess Salt.

She is one of the fast growing actresses in the Nollywood film industry and she has killer curves.

Biodun Okeowo is a popular Yoruba actress also known to many as Omobutty, a nickname she got after starring in the popular movie of the same name. She has an hourglass shape and according to the actress, she inherited it from her late mother.

The light-skinned actress is a popular personality in the yoruba movie industry. The mother of two joined the film industry in 2006.

Moyo Lawal has natural curves and says she has never gone under the knife. She gets her curves due to her fitness training program. She is always ready to exercise and this explains why she has a natural curve.

The curvy actress gained recognition in the movie industry with her role in Tinsel, a Nigerian soap opera.

Anita Joseph is one of the most controversial actresses in the English sector of Nollywood.

The actress is always ready to post curvaceous photos which gathers a lot of comments from her followers. She revealed to people that, with the help of a waist trainer, she got her desired shape. In 2005 she joined the Nigerian movie industry and in 2006 she rose to fame after acting in the movie Tears in my Eyes.

She’s appeared in movies such as Doll House and Ikogosi. She says she has one of the biggest bums in Nollywood and feels good about it.

10. Daniella Okeke
Daniella Okeke is a Nigerian actress best known for starring as Joke in the 2013 blockbuster movie Lagos Cougars. This role earned her a ‘Best Actress in a Leading Role’ nomination at both the 10th Africa Movie Academy Awards and 2014 Nigeria Entertainment Awards. She’s since gone on to star in other movies including The Boss is Mine, Flaws, and I Think He Loves Me.

She is one of the few actresses who has tried to stay out of controversies.