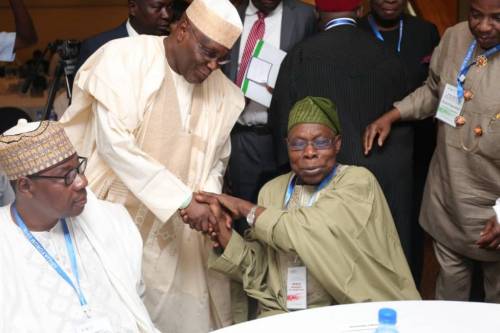 Many of us had resigned ourselves to the second term of Muhammadu Buhari as President, until the emergence of Abubakar Atiku as candidate of the opposition Peoples Democratic Party, PDP. A year ago, whenever I peered into the Nigeria’s political landscape, especially into the campaign year, I always failed to view anyone in the PDP, the other major party, or wherever, with the sufficient stature to challenge and deny Buhari a second term.

Events in the last few weeks, particularly the recent endorsement of PDP’s Presidential candidate, Atiku Abubakar, by his erstwhile nemesis, Olusegun Obasanjo, has disturbed the permutations and dramatically charged the atmosphere. Pundits, analysts and busybodies like yours sincerely had been scurrying to their laptops to put this unexpected upheaval into proper perspective.

After his disappointing performance in the 2014 primaries that elected Buhari as the All Progressives Congress, APC, candidate, I thought it was final curtains for Atiku’s presidential ambition. He, like Buhari, has been perennially featuring in many Presidential Elections. His name featured in 2007, 2011 and 2015 without any success. Looking back, I guess his most successful campaign after 1999 could be the one he conducted as a sitting Vice-President against the third term ambition of his boss, President Obasanjo, in 2004/5. Many of us who had a ring-side view of the events then knew what a rugged, dogged fighter Atiku could be. It was his last successful campaign.

But what a fight it was! The President and the Vice-President slugging it out in the open was unprecedented. The long open conflict provided a great deal of entertainment and apprehension to the Nigerian public. At the very start in 2003, the schedules of duties of the Office of the Vice-President were dramatically reduced and constricted. The office was merged with that of the President and Atiku’s staff were made to kowtow to the President’s wing for the most meagre amount to undertake the most mundane assignment.

For many of us who were aides in that office at the time, it was a very difficult time to operate. Besides lacking working material, every aide in Atiku’s office became fair game, a sitting duck that could be fired at will. From the beginning of the crises in 2003, President Obasanjo fired at will, taking pot-shots at Atiku’s staff until by 2006 only a few aides were left standing. The left-over were quickly dispensed with in December 2006 when it became clear that the Obasanjo’s third term bid was lost.

We watched and continued to hope through those very anxious years if these leaders would reconcile but it never happened. As the fight grew more acrimonious and their tenure was approaching the finishing line, many of their mutual friends tried to intervene without success. I recall a mutual friend of theirs, who tried to intervene but was rebuffed by the President. He persisted. One morning he attempted to walk from the Vice-President’s wing of the Villa to the President’s in his bid to kick-start a reconciliation. A few minutes later visitors and staff alike were shocked to see the said gentleman being carried aloft by hefty security men out of the main office building and dumped where vehicles pull up after crossing the last security gate. The point was made and I guess nobody tried again.

The relationship between heads of governments and their deputies is always a tricky affair and difficult to fathom. At the time when the relationship between Atiku and Obasanjo was at its lowest ebb, a similar scenario was playing out in South Africa between Vice-President Jacob Zuma and President Thabo Mbeki. Their relationship had so irredeemably broken down that by 2005 Mbeki had to drop Zuma out of the government. The twist in this Zuma/Mbeki saga, however, is that two years later Zuma defeated Mbeki at the ANC leadership contest. When Mbeki lost the leadership of the party, he had to also resign as South Africa’s President to give way for Zuma to take over.

Another intriguing relationship between a head of government and his deputy was that between Mahathir Mohammed, the charismatic Prime Minister of Malaysia and his deputy at a time, Anwar Ibrahim. From 1993-98 Anwar Ibrahim had served as Deputy Prime Minister, but his relationship with Mahathir, his boss, went down to such a low level that he was dismissed. He also ended up in prison. Anwar suffered the indignation of public trial and jail for a number of years.

Mahathir himself retired in 2003 after over thirty years in power and handed over to a protégé. Out of office, he became dismayed with how his successors handled the reins of power and became increasingly vociferous in his condemnations. At a point in 2016, he took his leave from ruling party, the United Malays National Organization, UMNO, a party he joined as a young lad of 21 in 1946. A year later, he formed his own party, the Party Pribumi Bersatu Malaysia, PPBM, which he subsumed into the opposition party, the Pakatan Harapan and became its Chairman and Prime Ministerial candidate even though he was already over 90 years. He reached out for support to his former deputy whom he had cause to be disgraced and jailed. The former deputy was still in jail but to strengthen the coalition, Mahathir named Anwar’s wife his deputy.

The rest is of course now history. Mahathir, 94 years old, is today the Prime Minister of Malaysia. Anwar is out of jail, and as arranged is warming up to take over from Mahathir next year. You don’t need to be a student of history to draw any parallels from these events as they relate to our political situation now. My guess is that if the Nigerian constitution had allowed it, we would today not be talking of Atiku’s candidature but Obasanjo-Atiku ticket once more.

But this is all by the way. We see exciting days ahead. The campaigns will once more be tough. What the PDP had exhibited in the last few days is nothing but a renewal. The seamless manner they ran their Port Harcourt convention and the easy manner the presidential candidate emerged all point to a more united and energised party. Atiku the presidential candidate is yet to take a wrong step. He has got the PDP Governors who were initially against his candidature back in the queue.

His choice for the Vice-President’s slot was roundly applauded. There is a general agreement that Peter Obi, an astute businessman and politician who emerged the Vice-Presidential candidate is a solid technocrat that was said to have run Anambra State as two-term Governor in a disciplined and competent manner. He had also a reputation for being a dogged fighter. Just like Atiku, he was also one politician who faced legal and other onslaughts and still managed to survive in office as Governor for two terms. Then as an icing on the cake, Atiku made up with Obasanjo, jolting many of us who thought it was impossible.

I see the handlers of the Buhari campaigns returning to the drawing board in the war room, to re-strategise as their opponents have now regrouped in a grand manner. The war-tested Generals in the PDP are getting itchy for action. Their batmen are busy ironing the creased uniforms, brushing the boots and putting a shine to the heavy medals. They are busy poring over the operational details to guide the Atiku-Obasanjo offensive. Definitely there will be no punches held. It promises to be a long-drawn-out battle.