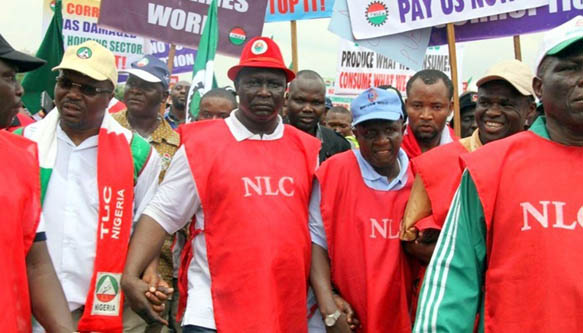 Labour leaders were, on Thursday, summoned to a meeting at the Aso Rock Presidential Villa, to find ways halt the strike that began at midnight.

Chief of Staff to the President, Abba Kyari, who summoned the Labour leaders, assured the unions, comprising executives of the Nigeria Labour Congress (NLC), Trade Union Congress (NUC), United Labour Congress (ULC), NUPENG, PENGASSAN during the brief meeting, that talks on the minimum wage which was initially stalled would be reopened.

The workers were, however, kept in the dark as to what government could afford to pay Nigerian workers due to the absence of the Ministers of Finance and National Planning, Zanaib Ahmed and Udoma Udo Udoma, who were both out of the country on official assignments.

Kyari said that the meeting was called to know exactly what stalled the ongoing negotiation on minimum wage and not specifically for the amount the government was proposing.

According to Kyari, “The purpose of this meeting is to know what led to the strike,” adding that from his interaction with the Labour leaders, “It is the process of arriving at a figure that got stalled.”

National President of the NLC, Ayuba Wabba, who led the delegation, told State House Correspondents that they had a fruitful deliberation with the Chief of Staff and that the discussion would be taken to the necessary organs of labour.

He confirmed that the strike arose from the stalled negotiations even before parties could agree on a definite figure as new minimum wage.

Wabba’s words, “We have had extensive discussion about what led to the stalemate what is the position of Labour our demands and also what needs to be done to make sure this issue is addressed to its logical conclusion.

“So, all of these are what we discussed and what government has tried to put on the table in respect of how they think the process should be driven and how we can be able to conclude because at the stage negotiations were stalled figures were not even being considered.

“It was at the point the figures were being considered that the meeting was stalled so we have told them that through the process of collective bargaining that platform must be brought back immediately then we conclude the process and drive it to the next level.

“So, those are the issues we have discussed and they have also given some proposal which we need to discuss with our people.

“We are here on representative capacity we will discuss with our people before we can make final pronouncement on whether or not the action can be suspended but clearly speaking we need to update our members”.

The Federal Government had suspended the meeting of the Tripartite Committee on National Minimum Wage indefinitely without arriving at a resolution.

This resulted in organised Labour going ahead with the current national warning strike as announced earlier.

The talks for a new national minimum wage initially pegged at N65,500 across board breakdown irretrievably.

Sources privy to discussions which went on during the meeting of the Tripartite Committee on the new National Minimum Wage, chaired by former Minister of Housing and Urban Development, Ama Pepple, indicated that the organised private sector had settled for N25,000 while other unions had on behalf of their members settled for N43,000 as the least they can concede from government.

Vice President Yemi Osinbajo had, last week, invited some cabinet ministers and Heads of revenue generating agencies to the presidential villa to deliberate on the feasibility of implementing the new wage bill under the present administration.