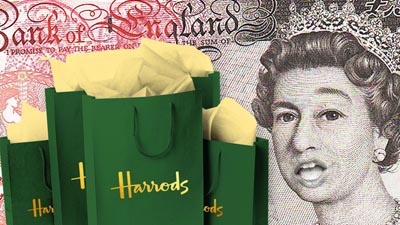 Harrods, the iconic London department store, burnished its questionable credentials as the go-to destination of the global kleptocracy this week after it emerged that the wife of a wealthy, jailed Azerbaijani criminal spent more than £16m ($22m) in the London store over a 10-year period.

Zamira Hajiyeva, 55, the wife of a former state banker in Azerbaijan, is the target of the UK’s first Unexplained Wealth Order (UWO), a new piece of anti-money-laundering legislation that compels its subjects to provide a “clear account” of how they purchased British assets.

Hajiyeva is the wife of Jahangir Hajiyev, 57, the former chairman of the state-owned International Bank of Azerbaijan. In 2016 he was sentenced to 15 years in jail for defrauding the bank out of up to 5bn manat ($2.9bn).

Even for Harrods, where former employees this week recalled rich overseas clients coming in with “bagfuls of cash,” the sums involved are breathtaking.

The decade-long shopping spree was able to be accurately assessed—at £16,309,077.87 ($21,445,486.29 at current exchange rates)—as the purchases were linked, in a rare display of parsimony, to three Harrods customer loyalty reward cards.

On one trip alone, Hajiyeva spent £150,000 on products from the luxury jeweler Boucheron.

The new legislation cracking down on what has been termed “McMafia” money has been broadly welcomed in London, where an influx of foreign cash from questionable sources has been blamed for massively inflating property prices.

Thousands of homes and luxury apartments in London have been bought up by foreigners looking to simply park their cash. Large swathes of Chelsea, Knightsbridge and Kensington have been overrun by so-called “buy-to-leave” investors, with deleterious effects on the local communities.

Drive around these oligarch ghost towns at night, and an astonishing number of windows are dark.

The broadly warm reception given to the UK’s first UWO is still, however, somewhat surprising as it effectively removes a cherished principle of the British legal system; innocent until proven guilty.

British authorities have managed to sidestep accusations of riding roughshod over individual rights as UWOs target assets, not the individual. This means that while you can have your assets taken off you by a UWO, the information turned up cannot be used in a criminal trial, or to jail you.

In the case of Hajiyeva, the question British authorities are asking is how they paid for their large home in the exclusive London enclave of Knightsbridge and a Surrey golf course, together worth more than £22m.

Hajiveya’s lawyers say that her husband was a legitimate businessman, whose wealth was inherited and also the result of shrewd business deals.

The Hajiyeva UWO case is being closely watched and if Britain’s elite National Crime Agency (NCA) succeeds in prosecuting the case, it is expected to launch at least nine new UWO investigations.

It is still, most analysts agree, a drop in the ocean.

The writer Oliver Bullough, author of the book Moneyland told The Daily Beast: “This is a big thing; it hasn’t happened before, it’s new and important and it’s good that parliament passed this law and it is good it is being used. However, it’s one case. We need to have a hundred of these before it starts making any difference.”

He says that London is well established as the de facto cash dump for the mega rich kleptocrat: “The global elite have been using London as a store of value for a long time. London property is where you secure your money. You steal it in Russia, Nigeria, Brazil, wherever, and you launder and disguise it and use it to buy property in London. Britain’s legal system has been relied on to protect property owners however they came by it. Hopefully, this will stop these people wanting to use London as a bank for dirty money.”

“This is pretty normal. They buy Birkin bags by the dozen. I knew one Russian guy who told me he had to move out of Knightsbridge because his wife was spending so much in Harrods”

Laudable as the aims may be, might not such a crackdown negatively affect the British economy? “The money doesn’t really benefit many people. This money is not a productive investment. We could live without it,” Bullough said.

Bullough added that while the free-spending ways of Hajiyeva have shocked ordinary people, in the rarified world of the mega-rich they are not exceptional. “This is pretty normal. They buy Birkin bags by the dozen. I knew one Russian guy who told me he had to move out of Knightsbridge because his wife was spending so much in Harrods.”

Harrods, he said, is a key part of the story of dirty foreign money in London: “Harrods turns over about £2bn a year. The British fishing industry does about £750m.”

Dominic Kavakeb, Communications Manager for Transparency International, which has compiled a list of £4.2bn-worth of suspiciously funded property in the UK, told the Daily Beast that the role of Harrods should not be ignored.

“There is a whole layer of professional enablers who turn a blind eye,” he said. “At best they are ignoring it, at worst they are complicit. This kind of activity should pull up a red flag. The private sector is the first line of defense against money laundering. Harrods will say, ‘It’s not our job,’ but if they don’t report it, who will?”

A source at the NCA told The Daily Beast that they had never heard of a luxury store like Harrods reporting any suspicious activity, and Harrods did not reply to an email from The Daily Beast seeking comment.