The Senate has suspended the ministerial screening exercise which was scheduled to enter day three today, October 15.

According to unconfirmed reports, the Senate’s reason for suspension comes on the heels of a court order secured by the Peoples Democratic Party (PDP) against a nominee and former governor Rotimi Amaechi.

But according to the Senate spokesman Dino Melaye in a chat with Africa Independent Television (AIT), the Senate suspended the screening so as it can be holistically attended to.

He said: “The resolution of the Senate is that the screening exercise be postponed till Tuesday, October 20 and Wednesday, October 21, so as it can be holistically attended to. We also want to attended to other Legislative responsibilities like bills, motions and adoption of Senate. Nigerians should expect a better screening on Tuesday and Wednesday.”

The Senator seems right as the Senate Leader and Clerk of the Senate moved for the presentation of Ten (10) Bills for First Reading at today’s plenary session in the House.

A Point of Order was also raised regarding a Petition against the ministerial nominee from Sokoto state, Aisha Abubakar by Senator Ibrahim Gobir. 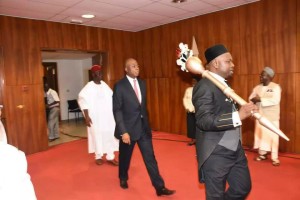 The committee on ethics and privileges headed by Sam Anyanwu is however looking into the corruption charges levelled against former governor Rotimi Amaechi.

Amaechi will only be screened after reports from the petitions against him have been submitted by the Committee on Ethics, Privileges and Public Petitions.

President Muhammadu Buhari has however withdrawn the name of immediate past deputy governor of Niger state, Ahmed Musa Ibeto, from the list of nominees.