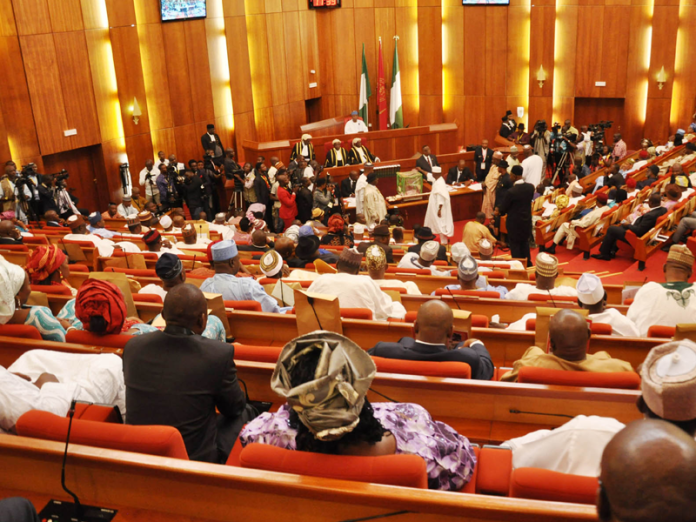 The lingering dispute between the Senate and the Executive arm over the retention of Mr. Ibrahim Magu as the acting chairman of the Economic and Financial Crimes Commission (EFCC), made a rude re-entry into the front burner of public discourse wednesday as the Red Chamber threatened to filibuster the confirmation of the nomination of Ms. Aisha Ahmad as a deputy governor of the Central Bank of Nigeria (CBN).

President Muhammadu Buhari had forwarded Ahmad’s nomination to the Senate for confirmation as a replacement for Mrs. Sarah Alade whose tenure expired in February.

But the Senate said yesterday that it would not consider the nomination in line with its July 4, 2017 resolution to suspend all executive confirmation requests until Magu is removed.

Besides, it said, the hostility would persist until the Senate’s power of confirmation of nominees to the boards of commissions established by enabling laws but not listed in the 1999 Constitution as amended, is clarified.

The Senate made the resolution, following a pronouncement by Vice President Yemi Osinbajo that the Executive did not require the confirmation of the Senate for the appointment of Chairman of the EFCC, explaining that the request should not have been transmitted in the first instance.

Magu’s nomination was rejected twice by the Senate on the basis of a report of the Department of State Services (DSS), which indicted him for criminal and unprofessional conduct.

Despite his rejection, Magu remained in office, a development, which has remained the source of the tension between the Senate and the Executive arm of government.

The Senate also suspended the confirmation of members of the boards of the agencies and forbade them from operating in an acting capacity as directed by the Executive.

The Chairman of Senate Committee on Media and Public Affairs, Senator Sabi Aliyu Abdullahi, in a telephone interview with THISDAY on Wednesday, confirmed that Ahmad’s nomination remained pending alongside the request for the confirmation of the four nominees for the Monetary Policy Committee.

He also confirmed that the impasse between the Executive and the Senate over Magu remained unresolved.
“Of course, the subject matter of that resolution has not been addressed. Until there is that engagement to know what to do, I am afraid that is still the position of the Senate. There was no time that resolution was reconsidered and there are quite a number of confirmation requests still pending before the Senate,” Abdullahi said.

He pointed out that the same executive arm of government had corrected itself when it sent nominations that were not in line with the law, or when the Senate rejected some of its nominees, as was the case of some non-career ambassadorial nominees.

He said: “The wisdom is very simple, if we have the power to confirm and for which you have invoked the relevant passages to forward these nominations to us when we confirm and you accept, then if we don’t confirm, there is no other way to say no.

“Recall that when the NDDC (Niger Delta Development Commission ) confirmation requests came, there were observations that the nominations did not fall in line with the law, we rejected it, sent it back and the executive corrected it.

“It is my personal wish that those who have the responsibility to Nigerians on this subject matter would look at it. That has been the situation and it has worked smoothly, I don’t know why some people think otherwise. In any case, the position to this is very clear, that is the position.”

Buhari, in a recent letter to the Senate, had sought the expeditious confirmation of Ahmad as well as Adeola Adenikinju, Aliyu Sanusi, Robert Asogwa and Asheikh Maidugu, who are expected to replace four members of the MPC whose tenures expire at the end of this year.

Meanwhile, some lawmakers yesterday called for the scrapping of agencies of government that had become irrelevant in contemporary Nigeria, and those whose mandates conflicted with other agencies.

The lawmakers said this was necessary to reduce unnecessary and avoidable expenditure, particularly as many of the agencies cost more to maintain than they generate.

The recommendation came as the lawmakers discussed the interim report of the Senate Ad-hoc Committee on Alleged Misuse, Under Remittance and other fraudulent activities in Collection, Remittance and Expenditure of Internally Generated Revenue (IGR) by revenue generating agencies.

The report accused the Nigerian National Petroleum Corporation (NNPC) of running a deficit of N3.1 trillion between 2012 and 2016 despite generating N15.5 trillion in the same period.
It also accused 93 agencies of short-changing the government to the tune of N1.7 trillion from the N21 trillion they generated.

The lawmakers argued that the agencies had explored loopholes in the Fiscal Responsibility Act, to short-change the government, whereas the Constitution requires that all revenue accruing to government be paid into the Federation Account.
Presiding, Senate President, Dr. Bukola Saraki, ruled that the committee was granted an additional six weeks to work out the accounting and legal technicalities of the final report.

He emphasised the need to clean up the process and stop situations where agencies expended about N13 trillion or more, while the national budget was just above N7 trillion.

The Deputy Senate President, Senator Ike Ekweremadu, called for a review of the report of the Stephen Orosanye Committee.
“We have too many agencies, some have conflicting duties. The issue is that some of the agencies were created before independence, pre-dating the constitution,” he said.

Senator Ben Murray Bruce (Bayelsa PDP) said many of the agencies had bloated workforce and cost a lot to maintain.
Bruce who was a former Director-General of the Nigeria Television Authority (NTA) and the Chairman of the Board of the Federal Radio Corporation of Nigeria (FRCN), said the Voice of Nigeria had lost relevance in the post-Cold War world.

“FRCN has 8,000 workers but it can be run with just 2,000 workers. I will not advocate firing anybody because people are hungry, but this is a very inefficient way to run a country. Let’s sell those agencies to the private sector, we can use the budget to build schools and hospitals,” Bruce argued.

He further observed that there was a need to examine the competence of political appointees deployed to head IGR agencies and adequate training should be provided for them on assumption of duty.

Senator Magnus Abe (Rivers APC) expressed worry at the clash between the FRA and the constitution on the remittance of all revenue to the federation account.

“It is incumbent on any agency which does not do so (remit to the federation account) to show which section of the law it relies on for its action,” he said and added that only 31 of the agencies are exempted by the FRA.

Meanwhile, the Public Accounts Committee (PAC) of the Senate has threatened to publish the names and details of Ministries, Departments and Agencies (MDAs) of government, which do not comply with the constitutional stipulation requiring them to submit their annual reports and audited accounts to the Office of the Auditor General of the Federation.

The Chairman of the committee, Senator Matthew Uroghide, speaking at a news conference wednesday, said the committee would also make recommendations to the Senate to suspend the budget approvals of the defaulting MDAs until they comply.

“Information from the Office of the Auditor General shows that all the Federal Government’s statutory corporations, commissions authorities and agencies are not up to date with the submission of their annual accounts and audited reports as specified by Section 85 (3) of the constitution. They have, therefore, violated the provisions of the constitution,” Uroghide said.

He disclosed the intention of the committee to conduct a status inquiry on the revenue generation and expenditure of the MDAs as appropriated, as part of its function to expose inefficiency, waste and ineffectiveness in the management of public funds.