Senator Ibn Na’Allah has described the trial of Senate President Bukola Saraki at the Code of Conduct Tribunal (CCT) as a persecution rather than a prosecuted. 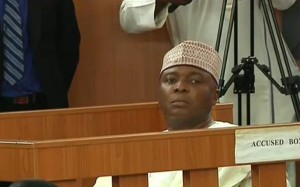 Na’Allah who also serves as the deputy majority leader of the Senate, in an interview in Abuja, said majority of the senators believe that the trial of the Senate president is in no way a prosecution, Vanguard reports.

The Senate on Thursday, November 6, shut down activities in solidarity with its president because of circumstances surrounding his ongoing assets declaration trial.

He said: “The belief of the 8th Senate and substantial number of the senators is that the trial of the President of the Senate is persecution rather than prosecution.

“If it is persecution, we believe that we have a responsibility to stand by him. But if it is prosecution, every senator of the federal republic believes and rightly so, that this government must be given all the necessary assistance it requires to fight corruption.”

Na’Allah argued that Saraki’s trial for alleged offences he committed 13 years ago was more of a political move than a legal or anti-corruption matter, maintaining that all the senators could not be wrong at the same time.

However the Senate deputy majority leader, said that he was sure that President Muhammadu Buhari meant well for Nigeria, with the intention of shifting from culture of impunity to that of adherence to the rule of law.

The suspension of Thursday’s plenary session over Saraki’s assets declaration trial was the third time the senators shunned sitting over the matter.

In the same vein, Ahmed Mogaji, the Senate president’s counsel, has resigned from defending Senator Bukola Saraki at the Code of Conduct Tribunal (CCT).

Mogaji urged the tribunal to suspend further hearing on the matter pending the Supreme Court’s decision on the matter, but his argument was opposed by the prosecution, Rotimi Jacobs. The counsel, in his reaction to the new development, resigned from his post as the defense counsel, leaving the former governor to ‘shop’ for a new legal consultant ahead of the next hearing.