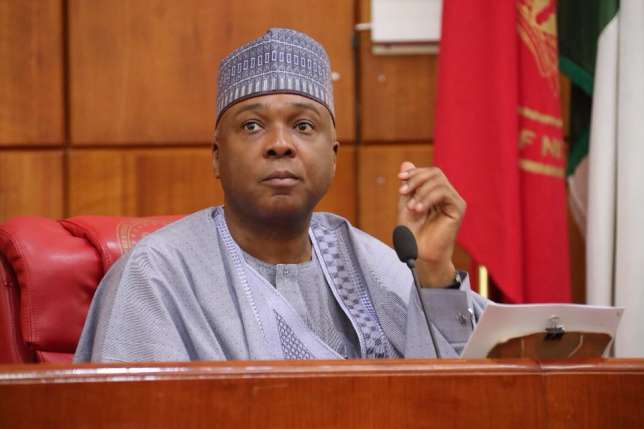 The meeting followed last Sunday’s invitation of the Senate President by the Police over the April 5, 2018 Offa bank robbery, which claimed 33 lives. Kwara State Governor, Abdulfatah Ahmed, was also linked to the robbery by the Police.

The meeting, held behind closed-doors, lasted for over an hour at the Vice President’s wing of Aso Rock Presidential Villa.

According to a Presidency source, the meeting was convened over the summon of the Senate President, Bukola Saraki, by the Police over his alleged relationship with suspects arrested in connection with the robbery attacks.

Although the Inspector-General of Police, Ibrahim Idris, declined to speak to journalists about the outcome of the meeting, Saraki on his Twitter handle said the Police later withdrew the invitation extended to him and instead asked him to respond to questions in writing within 48 hours. The meeting ended around 3:30 p.m.

This came as protests rocked the ancient city of Offa and Ilorin, yesterday, as scores of youths, market men and women, artisans, among others, marched through the two cities protesting the Senate President’s invitation by the Inspector General of Police, Ibrahim Idris, accusing the police authorities of politicizing the issue.

The IGP, who came out of the meeting in company of the AGF and the DSS D-G, betrayed no emotion to suggest there was anything unusual.

Descending from the stair case with the duo, he was confronted by journalists on the agenda and outcome of the meeting. He declined comments, and instead referred the State House correspondents to the VP’s ADC for any information and continued his discussions with Malami and Daura as they moved to their waiting cars.

Saraki had taken to his social media platforms to announce that he had received a letter from the Nigeria Police asking him to make his defence in writing and not to appear before police authorities.

He said: “Following my earlier tweet, I have received the letter from @PoliceNG. They are no longer asking me to appear at any station, but to respond in writing to the allegations within 48 hours, which I plan to do.”

His earlier tweet on his twitter handle @Bukolasaraki, read: “I have just informed my ADC to get the letter of invitation from @PoliceNG in respect of the allegations raised yesterday…. So that I can immediately honour the alleged invitation.”

Meanwhile, youths, market men and women as well as artisans embarked on street protest in Offa and Ilorin yesterday over Saraki’s invitation by the police, accusing the police IG of politicising the armed robbery issue.

Offa community High Chief, Bayo Akinola, who addressed newsmen in Offa, yesterday, on behalf of the Olofa, Oba Mufutau Gbadamosi, Esuwoye II, who is on Lesser Hajj, said the community has left “what has happened to God, but we don’t want the innocent to be punished. We want police to go after the real culprits.”

The protesters besieged the palace of the Olofa of Offa, complaining about the politicization of the robbery incident by the police authorities, saying Dr Bukola Saraki should not be implicated.

The youths, under the aegis of Youths Agitators Nationalism Forum, were armed with placards, with inscriptions as “we are one with Saraki in Offa”, “Don’t politicise Offa robbery”, “Baba IGP, this is too much for our leader, Saraki is the leader in Kwara”, “Offa robbery cannot be used to settle political scores”, among others.

Speaking with journalists, president of the forum, Mr. Peter Kayode, said the alleged implication of Dr. Saraki in the robbery incident was unacceptable and uncalled for.

He said it was inconceivable that the Senate president could be linked with the armed robbery in Offa community, being the first dignitary that paid a condolence visit to the community over the tragedy.

He also applauded Senator Saraki for the important roles he played to quickly facilitate the release of Armoured Personnel Carriers, APCs, to the community to beef up security in the area, with a view to forestalling a recurrence.

While urging the police authorities to stop politicking with the incident, Kayode threatened that thousands of Kwara youths, including secondary school students, those in tertiary institutions across the state and beyond would be mobilised to trek in protest from Ilorin to Abuja over the incident.

In Ilorin, the state capital, the protesters, under the aegis of Kwara Agenda, asked the Federal Government and the Nigeria Police to stop politicizing the Offa robbery incident.

Similarly, elders of Ajikobi Central Ward in the Ilorin West Local Government Area of the state, where Saraki hails from, said they received with shock the invitation of the Senate President by the Police in respect of the unfortunate Offa armed robbery attack.

The elders, in a statement signed by their coordinator, Alhaji Salihu Abdulwahab Agbaji, said: “It is illogical and unthinkable that the Senate President and the political leader of Kwara State will ask bandits to kill the citizens that he leads.

“The plot against our son is as a result of his growing popularity across the country, a situation which is making some of his political rivals uncomfortable. We urge President Muhammadu Buhari to urgently call the Inspector-General of Police to order so as to allow our hard-earned democracy to blossom.”

Meanwhile, members of the Coalition of Kwara Youths during a peaceful protest from the hinterland of Ilorin metropolis to the Press Centre of the Nigerian Union of Journalists, NUJ, condemned the invitation extended to Saraki by the police.

The youths, in their hundreds, carried placards with various inscriptions, such as “Stop evil politics,” Be professional”, “No to over-politicization of Offa robbery”, “Saraki is not an armed robber’, “Don’t implicate Saraki.”

Addressing newsmen, the Co-ordinator, Kwara Agenda, Haruna Yakub Kannike, said the group was surprised by Police invitation of Saraki over Offa robbery incident, adding that “nothing can be farther from the truth!”.

He added: “Our attention has been drawn to a fresh plot by the Headquarters of the Nigeria Police Force, Abuja, to implicate the President of the Senate, Dr Bukola Saraki, in the April 5, 2018, dastardly armed robbery attacks on banks in Offa, Kwara State.

“During the robbery operation that shook Offa to its foundations, many innocent citizens, including nine policemen, were murdered by the bandits.

“Prominent Nigerians have blamed the wanton killings of harmless citizens in Offa on that BLACK Day on the inefficiency of men and officers of the Nigeria Police Force.

“We are, however, surprised to see the Inspector-General of Police, Ibrahim Idris, wanting to politicize a serious criminal offence by insinuating that our revered Senate President, Dr Abubakar Bukola Saraki, and our amiable Governor Abdulfatah Ahmed had links with five of the arrested armed robbery suspects. Nothing can be farther from the truth!

“It’s instructive to note that this latest ploy to frame Dr Bukola Saraki came after an earlier failed attempt by the Force Headquarters to frame our leader in a murder case involving some suspected cultists.

“The Senate President had on May 16, 2018, during plenary in the Senate intimated his colleagues about alleged plot by the police to frame him up in the murder case. When that attempt failed, following public outcry, the police is now concocting another cock and bull story just to nail Saraki at all cost.

“We are also pleased that the Senate President has dissociated himself from the armed robbery suspects and expressed his willingness to honour the Police invitation whenever he is duly invited.

“Ahmed has dismissed the allegations against him as false and rejected his alleged indictment by the Nigeria Police or the armed robbery suspects in their custody.

“He, therefore, urged the Police to complete their investigations and charge the suspects to court soon in line with the dictates of the rule of law. We are also pleased to note that the suspected gang leader had during an interview with newsmen in Abuja, confessed that “one dismissed police officer, Michael Adikwu, was the one that came with the ammunition.

“On the alleged involvement of Dr Bukola Saraki and Governor Abdulfatah Ahmed on the robbery incident, the suspected gang leader said ‘No! They did not send us for the robbery but because we are their political thugs, that’s what led us to the robbery. It is devil that pushed us.’

“We want to use this forum to make it clear to the Police hierarchy that Saraki is our leader and a law-abiding citizen whose passion is to improve the lot of the common man. He should be left alone to continue the good job he and his colleagues are doing in the National Assembly.

“We are, therefore, warning those behind this fresh plot to frame and tarnish the image of our leader to retrace their steps. We have no doubt in our mind that this fresh plot like the ones before it shall fail woefully.”