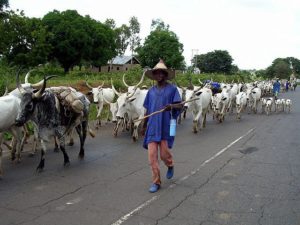 The Seriki of the Ekiti State Chapter of the Jamu Nate Fulbe Association of Nigeria, an umbrella body for herdsmen based in the state, Alhaji Ahmadu Mahmoud, has appealed to the State Governor, Ayodele Fayose, to amend the anti-grazing law to allow herdsmen carry light weapons.

Recall that Fayose had on Monday signed the prohibition of cattle and other ruminants grazing bill, 2016 into Law.

The law prevents free grazing of cattle in the state and carrying of firearms by herdsmen as well restriction of grazing period to between 7am and 6pm.

The new law also prescribed six months jail term without option of fine to any herdsman, who defaults.

But reacting to the new law, in Ado-Ekiti, the state capital, Mahmoud explained that amending the law will allow herdsmen to can carry light weapons in order to ward off attacks from criminals.

He noted that the outright banning of night movement for herdsmen will create more confusion and make their work more difficult.

According to Mahoud, “We agree with the Governor on the grazing period of between 7am and 6pm, but we should be allowed to carry lesser arms and relocate at night.

“How can somebody who wants to carry his cattle numbering hundreds from Ekiti to places like Lokoja, Ibadan or Ilorin moves during the day? These places are densely populated and it will create traffic congestion and confusion everywhere. The government must look into all these.”