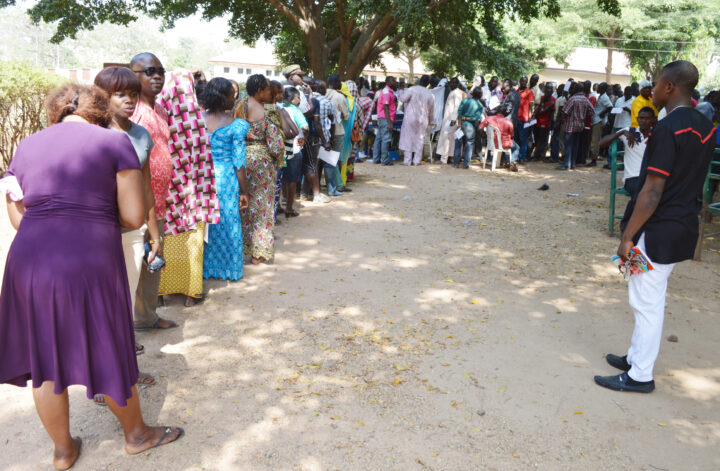 The Independent National Electoral Commission (INEC), has stated that ahead of the 2023 general election, about 93.5 million preliminary registered voters in Nigeria have been found eligible to take part in the voting process on Election Day.

This was disclosed by the INEC Chairman, Prof Mahmoud Yakubu, at the quarterly meeting held with political parties in Abuja, Wednesday.

He noted that 12.29 million registered voters in Nigeria were identified as new voters in the recently concluded Continuous Voters Registration (CVR), but after a thorough cleanup of the data, using the Automated Biometric Identification System ABIS, over 2.7 million were identified and removed as ineligible registrants.

Resultantly, INEC identified 23 of its registration officers who would be severely sanctioned for attempting to engage in multiple registration of Nigerians.

Earlier, the Inter-Party Advisory Council ( IPAC), passed a vote of confidence on the INEC Chairman for reshaping the electoral process through great innovations. They particularly commended him for deploying the Bimodal Voter Accreditation System (BVAS), as well as the INEC Result Viewing (IReV) Portal in the recently concluded elections in the country and also, for next year’s presidential polls.

While addressing the meeting, Mahmoud made it clear that the decision to deploy BVAS and IReV remained solid for the forthcoming election. He affirmed that INEC already started training master trainers on election technology that will ensure that the election will be a seamless process, adding that from Thursday, INEC will start the same training at zonal levels and eventually train all its adhoc staff for the 176,846 polling units nationwide.

‘There will be no Incident Form that enables ineligible persons to vote using other people’s Permanent Voters Cards PVCs during elections. We are committed to ensuring that the 2023 General Election is transparent and credible, reflecting the will of the Nigerian people.’

He added that among the invalid registered voters in Nigeria were double/multiple registrants, outrightly fake registrations and underaged people which did not meet the business rules of the electoral umpire.

He reiterated: ‘Consequently, the number of valid registrations (post-ABIS) is 9,518,188. In terms of demographic distribution, 7.2 million new voters or 76.5% are young people between 18-34 years while there is a slightly higher number of female (4.8 million or 50.82%) than male (4.6 million or 49.18%) voters. In terms of occupation, 3.8 million (40.8%) are students. Hard copies giving the full details of the distribution of the new voters are included in your folders for this meeting.

In response, the IPAC Chairman, Engr Yabagi Yusuf Sani commended the INEC leadership for being on track, while condemning the attacks on the INEC Chairman by unknown figures who use unregistered and unknown groups to attack him on social media just because of how committed he is to the introduction of technologies that will improve the electoral process.