Home Nigerians in the USA Profile Of Nigerian Doctor Who Helped Pfizer Discover Covid-19 Vaccine – Dr....
Facebook
Twitter
Pinterest
WhatsApp
The negative and wrong impression that Nigerians are mostly fraudsters, lazy, and dubious have been proven wrong again and again over the years by the stellar achievements and contributions to the development and advancement of humanity by Nigerians at home and in the Diaspora.
The novel Corona Virus pandemic brought about untold hardship to the world with over 74 million people infected and 1.65 million deaths worldwide. It also crippled the global economic activities and pushed several countries into recession. Scientists all over the world scrambled to discover a vaccine that will stem the destruction caused by the virus with its huge toll on human life and the ravaging of the global economy.

Just recently however, an announcement was made by the World Health Organisation (WHO) disclosing that Pfizer, an American multinational pharmaceutical corporation, had discovered a vaccine which could help curtail the virus and a Nigerian doctor was mentioned foremost as head of the team leading Pfizer’s in the COVID-19 vaccine development.

The name of the Nigerian is Dr Onyema Ogbuagu.

Mr Onyema is the son of the former vice-chancellor of Abia State University, Chibuzo Ogbuagu. His mother, Stella is a professor of sociology. Onyema has a twin brother who is an engineer.

He was born in Philadelphia, but left for Nigeria at an early age, where he lived till the completion of his medical training. He is married and has three children. He went back to the Yale school of medicine to work as the director of the institution’s HIV clinical trials programme.

While in Nigeria, he studied medicine at the University of Calabar in Cross River state and graduated in 2003. After graduation, he interned at the Ebonyi State University Teaching Hospital, Abakaliki, Nigeria.

He then went back to the U.S where he also interned at Mount Sinai School of Medicine (Elmhurst).

After qualifying a fellow of infectious diseases, he rose to the height of an associate professor of medicine at the Yale University School of Medicine, New Haven, Connecticut. He has worked there for five years focusing on finding a cure for HIV/AIDS.

The associate professor has led several researches in the US and Africa. He worked in the faculty of the human resources for health programme in Rwanda where he mentored medical residents and junior faculty in clinical research projects locally relevant in addressing important infectious diseases-related problems (particularly HIV/AIDS and antimicrobial resistance).

He has also worked at the Liberia College of Physicians and Surgeons (LCPS).

With the rise of the corona virus pandemic, Dr Ogbuagu’s ground-breaking research in the field of modified genetic code brought about massive global attention and recognition to his work and personality as he was one of the major brains behind the research at Pfizer for the potential world’s first effective corona virus vaccine.

History has revealed that some of the fastest vaccines ever developed took at least four years. However, scientists have been racing to develop one for corona virus under a year.

In a tweet on November 23, the US embassy commended the Nigerian doctor for helping “the drug company Pfizer develop the first effective COVID-19 vaccine in the United States”.

“Nigerians contribute to the world in so many ways. Our hats off to Dr. Onyema Ogbuagu at Yale who helped develop a COVID-19 vaccine,” the tweet reads. 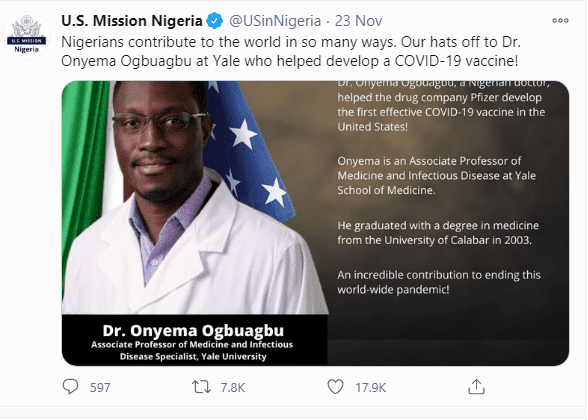 Numerous scientists and medical researchers has  initially, teamed up in an effort  to discover a vaccine which could help combat and cure the COVID 19 pandemic , while employing methods with a mix of established techniques and new technologies.

It is a known fact for many years that funding for a vaccine has never been easy but with the advent of this pandemic, billions of dollars has been pouring in from around the world to make a product that could help to control the pandemic.

With the recent announcement of leading drug giants Pfizer and Moderna about the success recorded in their preliminary late-stage trial, and how data  has shown that their vaccines were more than 90 per cent effective in preventing COVID-19, there has been a growing optimism  amongst world leaders and genuinely concerned individuals.

Meanwhile, Dr Onyema, speaking in an interview with ABC News, revealed that the Pfizer vaccine will help people achieve immunity, and that it will be “the beginning of the end of the pandemic”.

“The vaccine would help us achieve immunity. This could be the beginning of the end of the pandemic. Preparations are made both on the government end and the distribution network, including Pfizer who is working to have the vaccine stored at low temperature,” he said.

“While we have been celebrating a lot about having an effective vaccine and frankly, we have run out of emojis. A lot of work really needs to be done to reassure the community and I hope I am doing that also which is why I am on the programme.

“So we are telling the public that even though the vaccines have proceeded at an unprecedented phase, it is being done carefully, thoughtfully and with the right amount of oversight so that vaccines receive emergency use authorisation by the FDA and it passes through all the safety check to show that the efficacy numbers are real and that should really assure the public.”

He confirmed furthermore that the vaccine has been tested on 43,500 people in six countries and no safety concerns have been raised. Pfizer was quoted as saying it would be able to supply 50 million doses by the end of 2020, and around 1.3 billion by the end of 2021.

Dr Onyema speaking to BBC, confirmed that “the efficacy of the drug is as real as it was announced,  that “it should be noted that when administered, the result is 94% effective among adults that are 65 years old.”

Here is Dr Onyema fielding different questions from Dr Abike Dabiri, head of the Nigerian Diaspora Commission, and other Nigerians, on the discovery:

Indeed global history will remember Dr Onyema for his role in achieving this great feat, with regards to the COVID-19 pandemic, and the inspiration of hope it brought at a time when many despaired and felt the world was collapsing. Indeed another Nigerian has elevated his nation and given its citizens a positive identity and reason to celebrate.