President Muhammadu Buhari has approved the sum of $8.5 million to facilitate the immediate evacuation of at least 5,000 Nigerians fleeing from the Russia-Ukraine war to Poland, Romania, Hungary and Slovakia. 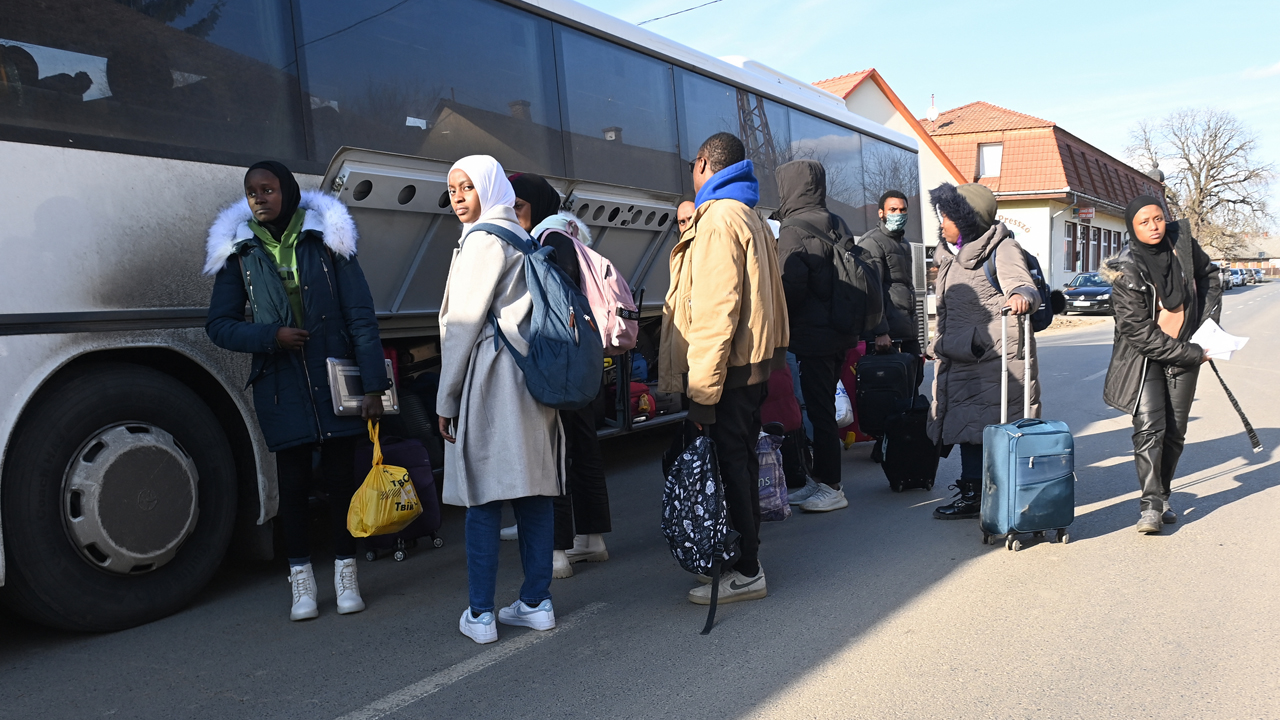 University students, including many from Nigeria, fleeing from the Ukrainian capital Kyiv, stow their luggage as they get on their transport bus close to the Hungarian-Ukrainian border in the village of Tarpa in Hungary on February 28, 2022. – More than half a million people have fled Ukraine since Russia launched its full-scale invasion five days ago, with more than half fleeing into Poland, the United Nations said on February 28, 2022. (Photo by Attila KISBENEDEK / AFP)

The Minister of State for Foreign Affairs of Nigeria, Zubairu Dada, who briefed newsmen alongside the Minister of Humanitarian Affairs, Disaster Management and Social Development, Hajiya Sadiya Umar Farouk, said the approval came following a joint memo presented by both ministries at the Federal Executive Council (FEC) meeting presided over by Vice President Yemi Osinbajo.

Dada disclosed that Air Peace and Max Air airlines have been contracted to provide three aircraft and run as many shifts as possible to facilitate the evacuation of the fleeing nationals.

Dada named those to be evacuated from the crisis area to include 940 from Romania, 150 from Slovakia and 350 from Poland who have registered for evacuation.

Speaking on the amount approved, Dada said: “The ministry of humanitarian affairs wrote a memo to the president seeking funding to enable us to conduct this exercise. The memo was to the tune of $8.5 million, which Mr. President has graciously approved. That provision entails an arrangement to evacuate no less than 5,000 Nigerians.

“Whatever happens you can be rest assured we are going to run any number of shifts that it will involve. Don’t forget, it will also involve taking care of those Nigerians that may decide not to come back. It also includes some assistance for the feeding that may have been done by the missions under whatever arrangements. Even the missions themselves are also in dire situations. So, it’s a whole gamut of activities that are involved.” 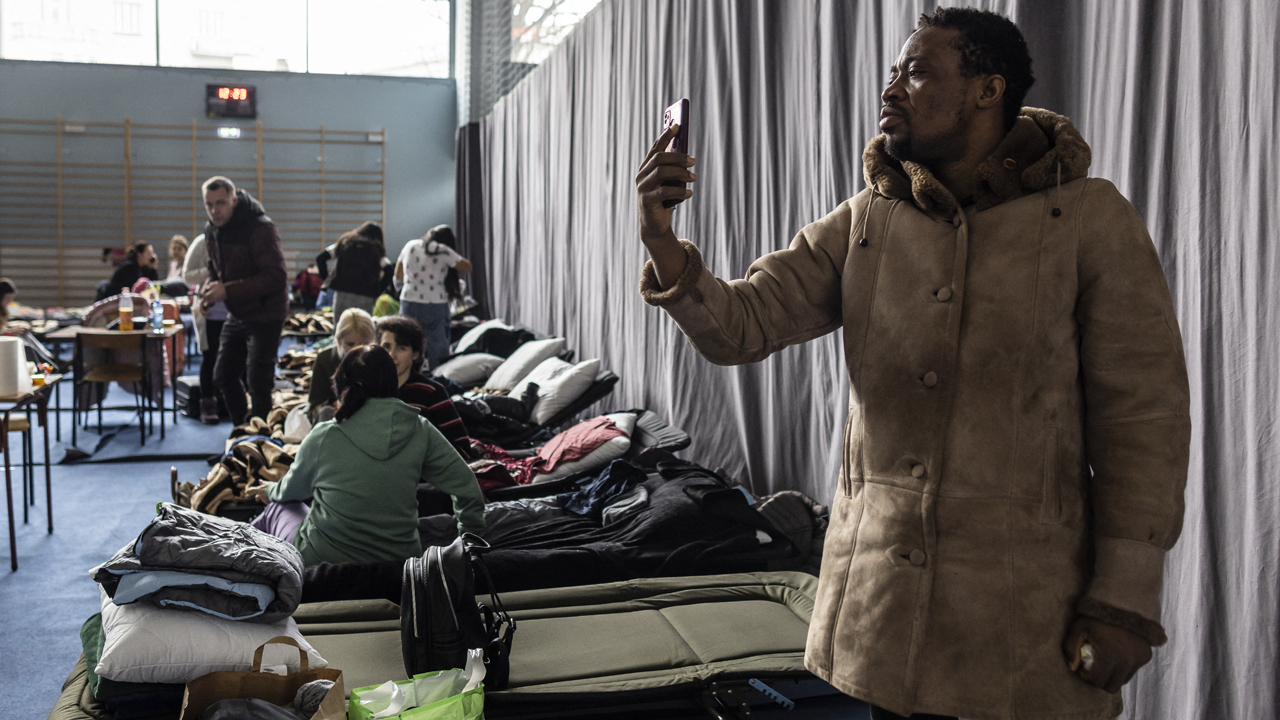 Chani, a student from Nigeria and other refugees from Ukraine are seen in temporary accomodation in a sports hall in Przemysl, in eastern Poland on February 28, 2022. – Overall, more than half a million people have fled Ukraine since its Soviet-era master Moscow launched a full-scale invasion on February 24, with more than half fleeing into neighbouring EU and NATO member Poland, the United Nations said on February 28, 2022. (Photo by Wojtek RADWANSKI / AFP)

On students trapped in Ukrainian cities now in the hands of Russians, Dada said: “We want to believe the Russian armed forces will obey the rules of engagement. They know the rules about civilians that are caught up in situations such as this. We want to assume they will respect international laws and ensure that no harm comes to them.”

About 2,090 Nigerians will return home to Nigeria from Ukraine today after finding their way to Hungary, Poland, Romania and Slovakia.

The Permanent Secretary, Ministry of Foreign Affairs, Ambassador Gabriel Aduda, who disclosed this yesterday in Abuja, said: “We can confirm that Chartered flights departed yesterday, March 2, 2022, to pick up Nigerian evacuees back home.”

He noted that the first batch of evacuees is expected to arrive in Nigeria today, Thursday, March 3, 2022.

According to him, the capacity and route of the airlines are as follows: Max Air to Romania 560 persons, Air Peace to Poland 364 persons and Air Peace to Hungary 360 persons.

MEANWHILE, Civil rights advocacy group, Human Rights Writers Association of Nigeria (HURIWA), yesterday, condemned the administration of President Buhari for its tardy response to a Save Our Soul message sent to him seeking immediate evacuation by Nigerians in Ukraine.

In a statement by its National Coordinator, Comrade Emmanuel Onwubiko, HURIWA criticised the Minister of Foreign Affairs, Geoffrey Onyeama; the chairman of the Nigerians in Diaspora Commission NIDCOM, Abike Dabiri-Erewa, and the Nigerian Embassy in Kyiv, the Ukrainian capital, for foot-dragging on the request of over 5,000 Nigerian students in the wake of the bloody invasion of Ukraine by Russian forces.

Onwubiko said: “Like other aspects, President Buhari’s Presidency fumbled again, this time woefully, because it failed to effectively and timeously evacuate Nigerians from Ukraine many weeks before the eventual war started following the needless invasion of Ukraine by Russia on the illegal orders of President Vladimir Putin.

“The Foreign Affairs Minister also failed. NIDCOM has failed. The Embassy of Nigeria in Ukraine has failed. We failed our children who are mostly students in Ukraine and these are youths that left due to neglect of government of the educational sector and the incessant and annoying strikes by the Academic Staff Union of Universities due to the criminal failures of the Federal Government to keep to its own side of the obligations.”

The body called for the immediate resignations of education, and foreign affairs ministers as well as the sacking of the diaspora commission boss as punishment for dereliction of duty.

Meanwhile, Russia intensifies its attacks on key Ukrainian cities, with fighting raging for the seventh day in the north, east and south.

Hundreds of people are feared dead in the southern port of Mariupol following hours of sustained shelling, the city’s deputy mayor says.

Also in the south, Russia has been battling for control of Kherson but its mayor says the city is still held by Ukrainian forces.

Russia’s president, Vladimir Putin has said ending the military operation in Ukraine would solely be based on unconditional compliance with Russian security and not ongoing negotiations. He added that any further NATO moved to the East would be unacceptable.

Putin made this known while addressing the press at a televised conference, adding that the West has been invading their homes and refusing to keep their deals.

“There is nothing unclear about this. We are not deploying our missiles on the borders of the U.S., on the other hand, the U.S. is deploying its missiles close to our home. We are not demanding something excessive. We are simply asking them not to deploy their attack systems at our home. What is so unusual about that? What would the Americans think, if Russia comes to the border between Canada and the U.S. or Mexico and deploy our missiles over there?” he asked.

He said that Russia is following the principles of Vladimir Lenin, former Premier of the Soviet Union, stating that the current issues with Ukraine are a matter of security, not just history. “It’s not the negotiations that matter, it’s the outcome and I have reiterated this many times,” he added.

Putin explained that in 1990, NATO guaranteed it won’t come an inch to the East but didn’t keep to promise as it has seen five waves of NATO expansions in Romania, Poland and others, deploying their relevant attack systems over there.

“We are not threatening anyone, they came to our borders, saying Ukraine would join NATO and they would deploy their military base, bilateral and attack systems there.

“You say you will not expand then you keep expanding, you say we will have equal guarantees for everyone on a number of international agreements then we see there is no equality or equal security,” he emphasised.

According to him, in 1918, an assistant to the U.S. president, Woodrow Wilson said the whole world would feel calmer and safer if enormous Russia would be replaced with the states of Siberia and four more states in the European part of Russia and in 1991, we separated into 12 parts. It seems to me that the U.S. were not satisfied with that, they think that Russia is too large.

“Even the European nations have turned themselves into a union of states. They are quite small states with a population of 60 to 80 million people, but even after the dissolution of the Soviet Union, we only have 146 million people and that is too much for the West. I think that is the explanation for their constant pressure against us,” he said.

Putin recalled that in the 1990s, the Soviet Union did everything it could to build normal relations with the West and the U.S., but the U.S. sought ways to destroy them.

“Our military nuclear cities had people from U.S. intelligence, whose job was to visit the Russia military cites. They spent their whole days there and the Russian government had advisors from CIA, working inside of it. What else did you need, why did you have to support the terrorist in Northern Kansas and Hues, terrorist organisations to reach your goals and break down the Russian federation and I know that as the former Director of The Federal Security Service of the Russian Federation (FSB)?

“We were working with double agents and they were reporting to us on the tasks of the West and intelligence agencies. Why did you have to do that? You could have treated Russia as a possible ally and strengthened trust; instead, you tried to keep breaking us up and then you started NATO expansion to the East. We say don’t do that, you had promised you wouldn’t and you say where was it put in written form? We kept expressing our concerns and they kept doing whatever they wanted,” Putin explained.