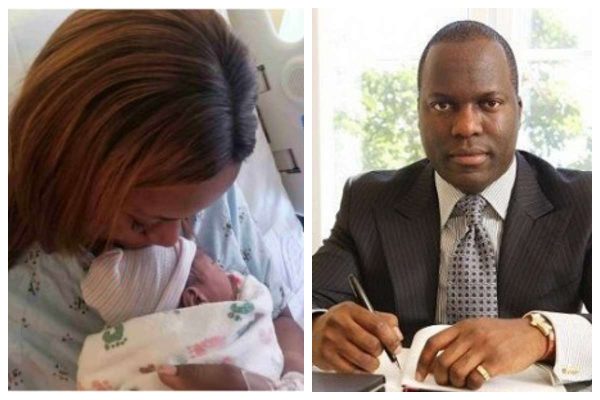 Following months of speculation, it appears that popular celebrity blogger Linda Ikeji, has finally revealed the identity of her son’s father.

The billionaire blogger who has left many wondering as to the identity of her baby daddy right nowhas finally put all doubts to rest her son is without a father.

Sharing a picture of herself with the new born, she added a caption that might finally put all the rumours to bed. She wrote;

Going home with my prince. Beginning of the best years of my life! His name is Jayce by the way, Jayce Jeremi. 😍😍. Will share pictures soon! 😘😘

Going home with my prince. Beginning of the best years of my life! His name is Jayce by the way, Jayce Jeremi. 😍😍. Will share pictures soon! 😘😘

Baby J as he is widely known was named Jane Jeremi by his parents, Linda Ikeji and Sholaye Jeremi.

It would be recalled a user of popular Nigerian forum, Nairaland had claimed that Sholaye Jeremi was responsible for her pregnancy. The user wrote back then;

“Linda Ikeji is pregnant for Sholaye Jeremi, a close associate to Minister of State for Petroleum, Ibe Kachikwu. He is from Sapele, Delta state. 100% confirmed. The funny thing is there was no engagement as Shola will not settle down although he is 40 plus.

Jeremi also stays in Ikoyi. Very credible, although Linda is trying to manage the situation but this information is 100 percent credible. You can do your findings as well, but thats the guy.”