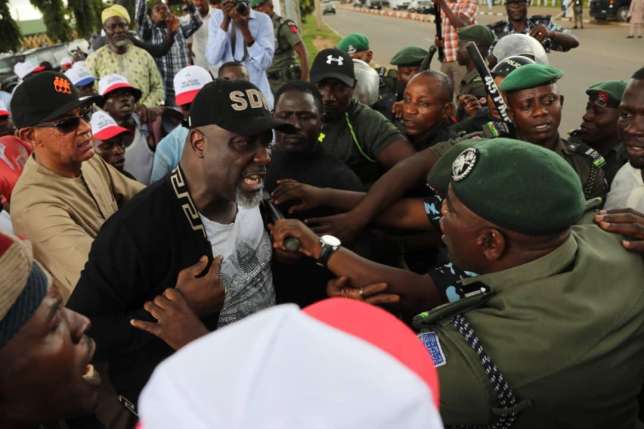 Senator Dino Melaye (Kogi West – PDP) was involved in a struggle with police officers during a protest at the office of the Independent National Electoral Commission (INEC) over the result of the recently-concluded Osun governorship election.

Senate President, Bukola Saraki, and national chairman of the People’s Democratic Party (PDP), Uche Secondus, led the protest to demand the cancellation of the rerun election which turned the tide of the election and ensured the victory of the All Progressives’ Congress (APC).

Pictures and videos have now emerged on social media showing a clash between the group of protesters and police officers who were on the scene to maintain order.

Melaye was one of the main actors of the clash as he could be seen in a shoving match with police officers who appeared to be pushing him back from breaking through the security barricade set to keep the protesters at a distance.

The lawmaker could be seen shouting back at officers as he got pushed forward by the crowd behind him and pushed back by the officers trying desperately to maintain control.

Senator Ben Murray-Bruce, who also appeared in the pictures, took to his Twitter account (@benmurraybruce) to allege that the crowd of protesters, including him, were teargassed by the officers.

He tweeted, “I have just been teargassed by the PoliceNG at inecnigeria office. Gunshots have been fired. This was and still is a peaceful protest. How can I be treated like this in a country I have fought for and invested in? This is madness, I came with words they answered with bullets!”

He later posted a video of the scuffle between Senator Melaye and police officers on his Twitter account, calling the act “unconscionable in a democracy”.

The protesters marched to INEC’s office to demand that the PDP candidate, Senator Ademola Adeleke, be declared the winner of the election by scrapping a rerun that was conducted.

The rerun election took place on Thursday, September 27, 2018, just days after INEC declared the original September 22 election to have been inconclusive.

This was because the victory margin of 353 votes of first-placed contestant, Senator Adeleke (254,698 votes), of the PDP over APC’s second-placed Gboyega Oyetola (254,345 votes) was less than the 3498 votes cancelled in seven polling units.