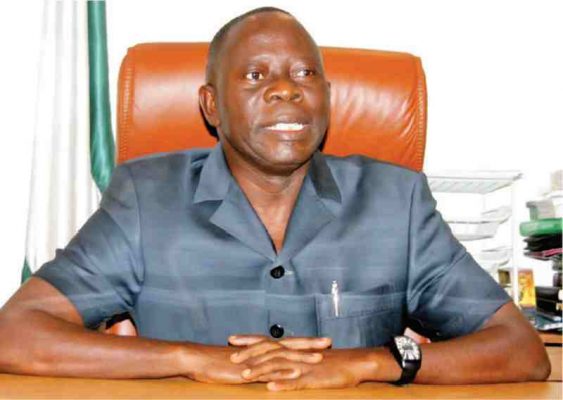 The National Chairman of the All Progressives Congress (APC), Comrade Adams Oshiomhole, is coming under pressure as governors of the party and other forces move against him.

But Oshiomhole said yesterday that only “one or two governors” were against him while 90 per cent of members of the party are solidly behind him.

Daily Trust gathered that Oshiomhole, in an effort to please different interests at the national and state levels, ended up ‘creating more enemies’ in the aftermath of the APC congress in May and primary elections for various offices earlier this month.

Only yesterday, Ogun State Governor Ibikunle Amosun accused Oshiomhole and a national leader of the party, Asiwaju Bola Tinubu, of conniving to produce an oil magnate Dapo Abiodun as the party’s governorship candidate in the state for the 2019 elections.

Oshiomhole had stirred up the hornet’s nest after the APC primaries that pitched him against Governors Abdulaziz Yari, Zamfara; Nasir El-Rufai, Kaduna; and Amosun, Ogun State, among others.

The feud with the governors worsened following the refusal of the APC National Working Committee (NWC) to endorse their anointed candidates.

The party had refused to endorse Mukhtar Shehu Idris and Adekunle Akinlade as the anointed governorship candidates of Governor Yari and Amosun respectively.

The party later got reprieve from El-Rufai after the name of his political adviser Uba Sani was submitted as APC candidate for Kaduna Central Senatorial District instead of Senator Shehu Sani who was earlier endorsed by the appeal panel.

However, Oshiomhole, who spoke yesterday with State House correspondents after a meeting with President Muhammadu Buhari and stakeholders of the APC from Kwara State at the Presidential Villa in Abuja, said over ninety per cent of APC members were with him.

“I think that I can say comfortably that about 90 per cent of APC members are happy, it is not possible to have 100 per cent.

“So, on the whole I am a very happy person, it has been quite challenging but I can say tough time doesn’t last, but tough people will always do. And I think we have been toughened by our history of struggle. And I am humbled by the amount of support we are getting from critical stakeholders of the All Progressives Congress.

“There maybe one or two governors who have issues and those issues can only be resolved democratically within the spirit, the letter and all the relevant provisions of APC Constitution, Electoral Guidelines and of course the Electoral Act. The Electoral Act is completely blind and our party rules too are completely blind to power that it is sensitive to procedures, it is sensitive to processes.

“The good news is that the overwhelming majority, we have about 23 governors, I think we are very much happy, I don’t have issues with anyone, only one or two may have some situation that they may want to see differently but that how the world is.”

Oshiomhole said though “one governor has publicly said he will ensure that I am removed,” that is the beauty of democracy in which majority is what matters.

The APC boss had earlier on Sunday through his spokesman Simon Ebegbulem said that some influential stakeholders had begun to mobilise to pass a no-confidence vote on him.

But in what was believed to be an effort to douse tension in the party, Ebegbulem yesterday distanced his principal from the statement he issued on Sunday.

“I want to state categorically that the statement was not authorised by my principal, Comrade Oshiomhole, and I hereby withdraw the statement. And I deeply regret the error,” Ebegbulem said, adding that “Comrade Oshiomhole will speak on the issues affecting the party when there is the need to do so.”

Our correspondents recalled that Governor Abdulaziz Yari of Zamfara State had at the peak of the APC primaries said Oshiomhole was acting like a mini-god, adding that he heard some governors had lost confidence in the APC chairman.

It was gathered that the governors were planning to meet in Abuja today or in the next few days to perfect how to remove him from office.

But the Director General of the Progressive Governors Forum (PGF), Salihu Lukman, has described as ‘unfounded’ the alleged planned meeting by the APC governors today to collect signatures in order to force a National Executive Committee (NEC) meeting that would unseat the party’s national chairman, Oshiomhole.

With the exception of few states like Kano and states not in control of APC, most of the state governors where direct primary held in the election of gubernatorial and state and national assemblies were not happy with Oshiomhole and have resolve to have him removed, Daily Trust learnt.

In Ogun State, Governor Ibikunle Amosun’s candidate for governorship, Abdulkadir Akinlade, did not emerge as the party’s standard bearer, where Dapo Abiodun,‎ go the party’s ticket.

Since the primaries, Amosun had become embittered, with reports last week suggesting that the governor was planning to leave the APC, but he denied such plans.

As for ‎Governor Yari, his brawl with Oshiomhole became public knowledge since the governor’s attempt to hold the party’s primaries in the state through indirect method failed.

Yari, who anointed his commissioner of finance, Muktar Shehu Idris, to succeed him, also failed as other contestants, mainly Senator Kabiru Garba Marafa, stood their grounds to resist any attempt at imposition.

In Imo State, Governor Rochas Okorocha was said to have been embarrassed initially by the declaration of Senator Hope Uzodinma as the party’s governorship candidate, ignoring his son-in-law, ‎Uche Nwosu.

Although another primary conducted was said to have produced Nwosu as the candidate, Uzodinma and others have gone to court, hence creating a crisis between Oshiomhole and the Imo APC stakeholders.

Similarly, the governors of Adamawa, Kaduna and Niger were said to have been severely embarrassed by Oshiomhole’s role in the crisis.

As for Niger State, after the emergence of candidates for various offices, Oshiomhole insisted on giving serving senators automatic tickets despite the fact that they lost to new entrants.

This did not go down well with Governor Mohammed Sani Bello.

In Cross River, where the‎ Minster of Niger Delta Affairs Usani Uguru Usani lost to Senator John-Owah Enoh, the minister and his supporters are said to be moving against Oshiomhole.

In Oyo State, where the Minister of Telecommunications Adebayo Shittu was disqualified by the party, the APC national chairman is also having issues with the minister’s faction.

In Rivers State, the APC faction of Senator Magnus Abe is also angry with Oshiomhole for recognising the candidate of Rotimi Amaechi’s faction, Tonye Cole.

In the FCT, there was outcry in some constituencies.

Meanwhile, the president’s wife, Aisha Buhari has dispelled the report that she barred Oshiomhole from meeting the president at the Villa.

But her media aide, Suleiman Haruna, described the report as “fake news.”

Mrs. Buhari recently condemned the APC primaries which she said were marred by irregularities.

Aisha was reportedly angry with Oshiomhole for failure to install her brother as the APC candidate in Adamawa.

The Supreme Court has set-aside an interim order of the Court of Appeal in Port Harcourt, which gave the All Progressives Congress (APC) the approval to conduct its ward, local government and state congresses in Rivers State.

In a judgement delivered yesterday, the apex court voided the ruling of the appellate court, which made a stay of execution of the orders of a Rivers State High Court barring the APC from conducting its congresses pending the determination of the suit before it.

But lawyers have expressed divergent views on the implication of the verdict of the Supreme Court on the list of candidates already submitted to INEC by the Rivers APC.

In the lead judgement read by Justice Cletus Nweze, the Supreme Court noted that the High Court had issued injunctive reliefs which stopped the conduct of the primaries following a suit filed by one Abdullahi Umar and 22 others.

The judge observed that the High Court presided by Justice Chinwendu Nwogu gave the order on May 11 in the suit marked: PHC/78/2018, affirmed on May 13 when some hoodlums belonging to a faction of the party invaded court premises in Port Harcourt, adding that despite the order the APC went ahead to conduct the primaries on May 19, 20 and 21.

The apex court said the APC “in the most impudent manner,” ran to the Court of Appeal to apply for stay of proceeding and execution of the high court order with respect to the suit marked PHC/78/2018. The appellate court stayed the execution of the May 11 order while declining to stay the entire proceeding of the court.