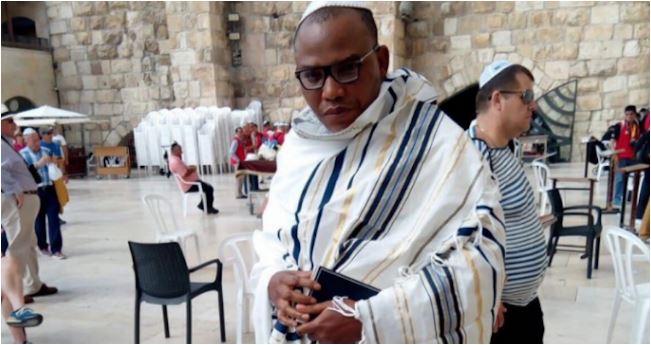 The Israeli government, yesterday, said there was no evidence of the appearance of the leader of the Indigenous People of Biafra, IPoB, Nnamdi Kanu in Israel.

The Israeli government said the pictures and videos showing Nnamdi Kanu praying in Israel could be old.

Speaking during an interaction with some African journalists in Jerusalem, the spokesman of the Israeli Foreign Ministry, Mr Emmanuel Nashon said there was no evidence that the leader of IPoB was in their country of recent.

“There are no details about his recent visit to this country yet,” Nashon said adding that the pictures and videos could be old ones.

Speaking on their relationship with Africa, Nashon said Israel had been misconstrued, adding that they were getting back to their old friends.

“Our relationship with Africa is extremely important,” he noted, insisting that the continent stands to benefit more from Israel.

“Israel is a peaceful nation that believes in the process of the world at this changing times,” Emmanuel disclosed, adding that they have different religions such as Judaism, Christianity and Islam that live peacefully with one another.

“Jerusalem is one of the great cities in the world. We are considering a lot of networks with Africa and African journalists will get direct contact with Israel journalists so that you don’t need to take news from agencies,” Nashon said.

In a related development, the people of South East have been advised to treat the touted disappearance and resurfacing of Kanu, as “a non-issue because it was carefully pre-arranged by the Department of State Services, DSS.”

Leader of Biafra Independence Movement, BIM, Chief Ralph Uwazuruike, stated this yesterday, at a press conference in Owerri, to react to Kanu’s reappearance in Isreal and broadcast.

“Not many of his ardent followers truly know that Kanu is not sincerely working for the independence of Biafra. His coming to Nigeria, his arrest, detention, trial, release on bail and his alleged disappearance and resurfacing, were all prearranged by the DSS”, Uwazuruike said.

It was the considered opinion of the BIM leader that if Mazi Kanu was sincere, he should have disclosed how he was spirited away from his Afara Ukwu country home, when the soldiers struck.

“How did he disappear from his country home? How did he survive the onslaught even when he claimed that about 28 people were killed during the military operation in his home? How did he leave Nigeria and what document did he use to traverse all the nations before arriving Israel? We couldn’t have forgotten so soon that the DSS seized all his travel documents”, Uwazuruike asked.

After giving a graphic account of the number of times he was arrested, detained and tried in court, Uwazuruike also reasoned that “a freedom fighter donates his life for the struggle he believes in.

“This is not the case with Nnamdi Kanu. Running away from the struggle means that he is a fake freedom fighter. This young man does not consult anybody and he has no adviser,” Uwazuruike said.

Coalition mobilises 1m youths to receive Kanu back to Nigeria

Meantime, a coalition of Igbo youth groups including Ohanaeze Ndigbo Youth Council Worldwide yesterday stated that it was mobilising one million Igbo youths across the South East geopolitical zone to herald the return of the leader of IPOB, Nnamdi Kanu back to the country.

In a statement issued in Abakaliki by Mazi Alex Okemiri, National President, World Igbo Youth Congress; Dr Helen Ogbonnaya, National Leader, South East Women Professionals and Mr Chidera Utucha President, Igbo Students Forum, the groups stressed that they were ready to support every purpose-driven leadership within the zone and beyond.