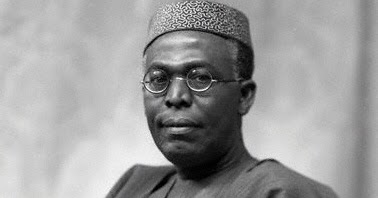 Chief Obafemi Jeremiah Oyeniyi Awolowo, GCFR (Yoruba: Ọbáfẹ́mi Awólọ́wọ̀; 6 March 1909 – 9 May 1987), was a Nigerian nationalist and statesman who played a key role in Nigeria’s independence movement, the First and Second Republics and the Civil War. He was the first premier of the Western Region and later federal commissioner for finance, and vice chairman of the Federal Executive Council during the Civil War. He was thrice a major contender for his country’s highest office. A native of Ikenne in Ogun State of south-western Nigeria, he started his career, like some of his well-known contemporaries, as a nationalist in the Nigerian Youth Movement in which he rose to become Western Provincial Secretary. Awolowo was responsible for much of the progressive social legislation that has made Nigeria a modern nation. He was the first Leader of Government Business and Minister of Local Government and Finance, and first Premier of the Western Region under Nigeria’s parliamentary system, from 1952 to 1959. He was the official Leader of the Opposition in the federal parliament to the Balewa government from 1959 to 1963. In recognition of all these, Awolowo was the first individual in the modern era to be named Leader of the Yorubas (Yoruba: Asiwaju Awon Yoruba or Asiwaju Omo Oodua).

Obafemi Awolowo was born on 6 March 1909 in Ikenne, in present-day Ogun State of Nigeria. His father was a farmer and sawyer who died when Obafemi was about seven years old.  He attended various schools, including Baptist Boys’ High School (BBHS), Abeokuta; and then became a teacher in Abeokuta, after which he qualified as a shorthand typist. Subsequently, he served as a clerk at the famous Wesley College Ibadan, as well as a correspondent for the Nigerian Times. It was after this that he embarked on various business ventures to help raise funds to travel to the UK for further studies.

Following his education at Wesley College, Ibadan, in 1927, he enrolled at the University of London as an External Student and graduated with the degree of Bachelor of Commerce (Hons.). He went to the UK in 1944 to study law at the University of London and was called to the Bar by the Honourable Society of the Inner Temple on 19 November 1946. In 1949 Awolowo founded the Nigerian Tribune, the oldest surviving private Nigerian newspaper, which he used to spread nationalist consciousness among his fellow Nigerians.

Awolowo was Nigeria’s foremost federalist. In his Path to Nigerian Freedom (1947) – the first systematic federalist manifesto by a Nigerian politician – he advocated federalism as the only basis for equitable national integration and, as head of the Action Group, he led demands for a federal constitution, which was introduced in the 1954 Lyttleton Constitution, following primarily the model proposed by the Western Region delegation led by him. As premier, he proved to be and was viewed as a man of vision and a dynamic administrator. Awolowo was also the country’s leading social democratic politician. He supported limited public ownership and limited central planning in government.He believed that the state should channel Nigeria’s resources into educa tion and state-led infrastructural development.Controversially, and at considerable expense, he introduced free primary education for all and free health care for children in the Western Region, established the first television service in Africa in 1959, and the Oduduwa Group, all of which were financed from the highly lucrative cocoa industry which was the mainstay of the regional economy.

From the eve of independence, he led the Action Group as the Leader of the Opposition in the federal parliament, leaving Samuel Ladoke Akintola as the Western Region Premier. Serious disagreements between Awolowo and Akintola on how to run the Western region led the latter to an alliance with the Tafawa Balewa-led NPC federal government. A constitutional crisis led to the declaration of a state of emergency in the Western Region, eventually resulting in a widespread breakdown of law and order.

Excluded from national government, Awolowo and his party faced an increasingly precarious position. Akintola’s followers, angered at their exclusion from power, formed the Nigerian National Democratic Party (NNDP) under Akintola’s leadership. Having previously suspended the elected Western Regional Assembly, the federal government then reconstituted the body after manoeuvres that brought Akintola’s NNDP into power without an election. Shortly afterwards Awolowo and several disciples were arrested, charged, convicted (of treason), and jailed for conspiring with the Ghanaian authorities under Kwame Nkrumah to overthrow the federal government. 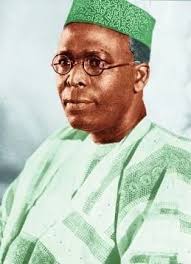 In 1992, the Obafemi Awolowo Foundation was founded as an independent, non-profit, non-partisan organisation committed to furthering the symbiotic interaction of public policy and relevant scholarship with a view to promoting the overall development of the Nigerian nation. The Foundation was launched by the President of Nigeria at that time, General Ibrahim Babangida, at the Liberty Stadium, Ibadan. However, his most important bequests (styled Awoism) are his exemplary integrity, his welfarism, his contributions to hastening the process of decolonisation and his consistent and reasoned advocacy of federalism-based on ethno-linguistic self-determination and uniting politically strong states-as the best basis for Nigerian unity. Awolowo died peacefully at his Ikenne home, the Efunyela Hall (so named after his mother), on 9 May 1987, at the age of 78 and was laid to rest in Ikenne, amid tributes across political and ethno-religious divides.