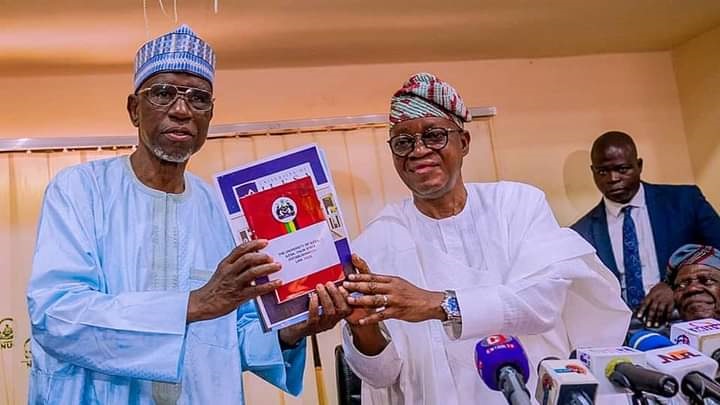 The National Universities Commission (NUC) yesterday, has given the approval of upgrading the Osun State College of Education to the University of Ilesa.

The Executive Secretary of the NUC, Abubakar Adamu Rasheed, officially presented the Letter of Recognition to the Osun State Governor, Adegboyega for the take-off of the newly approved University of Ilesa.

While receiving the letter of recognition at the NUC Secretariat in Abuja, admitted that it gave credibility to his commitment to upgrading the 44year-old College of Education to a university, adding that it will greatly solve the problem of palpable deficit in university education, especially in the state and beyond.

He also said that the institution as a university, will aid in training and equipping a diverse group of youths with professional skills, entrepreneurial ability and innovative insights, especially in mining, health and agri-business.

Hear him: ‘The establishment of the University of Ilesa is necessitated by the massive gap between qualified candidates and available space in existing higher institutions within the state, as education remains the primary industry in Osun.  The yearning is considerably insatiable, and as responsible leaders, we cannot ignore these needs.’

‘The new University of Ilesa shall focus on Agriculture and Agri-business to address food insecurity; mining technology, building on the abundant gold deposit in Ijesaland; and Medical Sciences to enhance the human resource need in the health sector.’

‘We are very deliberate in our approach as we seek to contribute to the diversification of our economy and wean it away from over-reliance on oil. In anticipation of the takeoff, we have identified credible candidates for the Governing Council and Principal Officers, ready to be appointed and hit the ground running.’

Recall that Governor Gboyega, in September, assented to the law seeking to upgrade the Osun College of Education to a total university, after which it was successfully passed into law by the Osun state House of Assembly, way back in August.. Shortly after this, Oyetola affirmed that his decision to upgrade the College to a university was borne out of a thorough and hectic interrogation characterized by the culture of deep engagement which his government was known for,, not that of fanciful effort.

He made it clear that the proposed university has been carefully conceived as a thoroughly entrepreneurial and innovative institution which will be funded from different sources like the community, the government, stakeholders and industry without mounting unnecessary pressure on the state finances.

The Osun State College of education was established in 1979 and has been in existence now for 40 years. Upgrading it to a university is a most welcome improvement to the people of Osun state.