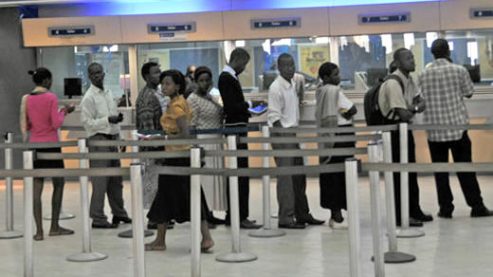 The Abuja Division of the Federal High Court has granted a request by Attorney General of the Federation, Abubakar Malami, for a temporary forfeiture of all funds held in bank accounts not linked to BVNs — and whose ownership could not be absolutely identified.

Also to be seized by the Nigerian government are funds held in bank accounts without sufficient know-your-customer credentials, court documents seen by PREMIUM TIMES said.

Industry experts expressed strong reservations about a lack of specific legal framework for the unprecedented forfeitures and potential coercion of banks by the federal authorities in separate interviews with PREMIUM TIMES Saturday.

No estimates were immediately available, but it is widely held that billions of naira remained trapped in the unlinked bank accounts since 2015 when the Central Bank of Nigeria ordered commercial banks to stop attending to new enrollees.

The order followed an originating motion of notice filed by Mr. Malami on behalf of the Nigerian government on September 28.

Nnamdi Dimgba, the Federal High Court judge who presided over the ex-parte motion, granted all the nine reliefs sought by Mr. Malami —himself represented by a lawyer, Usman Dakas— on October 17.

The court ordered all the 19 deposit money banks, DMBs, operating in the country to release to Nigerian government names of accounts not yet connected to BVN; account numbers; their outstanding balances; domiciling locations; and domiciliary accounts without BVN and where they are domiciled.

The court also ordered all of them to disclose any investments made with funds and to withhold authorisation for any outward inflow of funds from the accounts. All the details are to be submitted to Nigeria Inter-Bank Settlement System, NIBSS, and the CBN for authentication.

The banks were also directed to publish all bank accounts not linked to BVN in national newspapers with a 14-day notice for individuals with interest in such accounts to come forward and justify why their funds should not be forfeited to the Nigerian government.

Mr. Dimgba also ordered the CBN, which was joined as 20th respondent alongside the 19 DMBs, to appoint an official who will examine all the details submitted to the apex bank for compliance.

The government argued the matter under Section 3 of the Money Laundering Act, 2011.

The section said banks must “ensure that documents, data or information collected under the customer due diligence process is kept up-to-date and relevant by undertaking reviews of existing records, particularly for higher risk categories of customers or business relationships.”

The BVN is a unique identification number that can be verified and used to transact business across all the banking platforms in Nigeria.

The CBN imposed the policy to capture customers’ data for financial transactions and check fraud in the banking system.

Registration for BVNs commenced on February 14, 2014, across the country. The CBN said over 20.8 million customers enrolled 40 million bank accounts before the October 31, 2015, final deadline for customers residing within the country.

The CBN extended the deadline for Nigerians in the diaspora to December 2016 to sign up for the BVN system. But hundreds of thousands home and abroad are still believed to be left behind.

A financial analyst who spoke with PREMIUM TIMES about the court order rebuked the Nigerian government for attempting to shore up its revenues by forcibly seizing funds owned by private individuals.

“There’s no basis for this desperate move by the federal government because customers who owned the funds met the required criteria at the time they set up their bank accounts,” said Ugodre Obi-Chukwu, a Lagos-based financial analyst. “This is an attempt to use federal might to coerce banks into submitting funds that belong to customers for its own use.”

The Nigerian government had fallen on hard times since 2014 when dwindling price of crude oil began to take its toll on the country’s revenues.

The Buhari administration, which assumed office in May 2015, has made concerted pushes to source funding to finance a bloated federal civil service and new capital projects, including borrowing from local and international markets.

The government also said it would rely on recovered loot to finance its budget this year.

While Mr. Obi-Chukwu recognised financial challenges confronting the administration, he maintained that no policy must be implemented by fiat in a democratic system.

“The Money Laundering Act they used to sway the judge is clearly not sufficient to confiscate personal funds,” he said. “There’s no law that allows for this specific action taken by the government as it stands.”

He advised the federal government to allow people to withdraw their funds from the bank accounts if they’re not willing to link them to BVN, especially since they weren’t identified as proceeds of crime.

Liborous Oshoma, who runs a law firm in Lagos, condemned the order as “far-reaching and despotic” in nature.

“You can’t just drag banks to court and ask them to submit all funds in bank accounts which they’re holding in trust for private individuals,” Mr. Oshoma said.

“The funds are mostly personal deposits. In law, orders are supposed to be specific, directed and enforceable against individuals or institutions,” Mr. Oshoma said. “But we cannot see how the government assumed it could sue banks to enforce orders against individuals who have not been accused of any criminal offences.”

Mr. Oshoma said the Buhari administration did not fathom the possibilities of Nigerians who are serving long prison sentences abroad and may not be in tune with developments in the outside world.

“The despotic tendency of wanting to take what does not belong to them made them forget that people might be in conditions where they cannot come and claim their funds for the next 20 years or more,” Mr. Oshoma said.

“If the government is really desperate to get people’s money because they cannot be found, it should find sensible means of going about it and not resort to steps that are not in consonance with democracy,” he added.

Although he questioned the legal premise of the federal government’s attempt to seize the funds, Inibehe Effiong, also a Lagos-based lawyer, told PREMIUM TIMES the overarching goal of the move was understandable.

“The BVN is a policy of the federal government which is aimed at mitigating financial crimes in the system,” Mr. Effiong said. “The policy was backed by certain financial regulations which make it appropriate for the government to ask for a general freezing order of accounts whose owners cannot be ascertained.”

“But what I cannot understand is the legal structure upon which the policy is standing,” Mr. Effiong said.

Mr. Effiong said authorities should have sought details of bank accounts first, then examine them individually and isolate ones with suspicious traits.

“The government should have stopped at requesting for details of all the bank accounts. but not go as far as getting a blanket approval to withhold all funds.

“If they all the accounts based on their merits, they can sort out the ones with criminal traces and seek their forfeiture,” Mr. Effiong said.